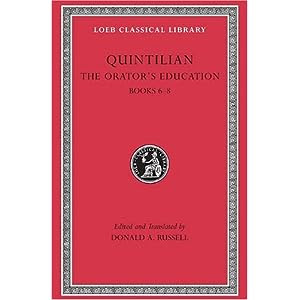 "While moderate and timely use of Metaphor brightens our style, frequent use of it leads to obscurity and tedium, while its continuous application ends up as Allegory and Enigma. Some Metaphors are also low--like the "rocky wart" I mentioned above--and some coarse. If Cicero was right to talk about the 'sink of the state,' meaning the foul ways of certain people, I am not therefore minded to approve the old orator's 'you have lanced the state's abcesses.' Cicero did well to point out the need to guard against an ugly metaphor (like 'the state was neutered by Africanus' death' or 'Glaucia, the excrement of the Senate,' to quote his own examples), and against one which is too grand or (as happens more often) inadequate and unlike. Once alerted to the fact that these are faults, one will find instances of them only too often. Excessive amounts of metaphor, especially of the same species, are also a fault. So too are harsh metaphors, that is to say those derived from distant resemblances, like 'the snows of the head' or

The biggest mistake however is made by those who believe that everything is appropriate in prose which is permitted to the poets, whose only standard is pleasure and who are often forced into Tropes by the necessities of metre. Personally, I would not say 'shepherd of the people,' on Homer's authority, in a speech, nor speak of birds' 'swimming' through the air, though Vergil uses this very beautifully for the bees and for Daedalus. Metaphor ought either to occupy a vacant space or, if it replaces something else, to be more effective than the word it banishes.
-from "Metaphor," Book 8.6, Quintilian, The Orator's Education, IV, Books 6-8 (Loeb Classical Library No. 127), Cambridge: Loeb Classical Library, 2002.
Posted by John K at 9:39 PM