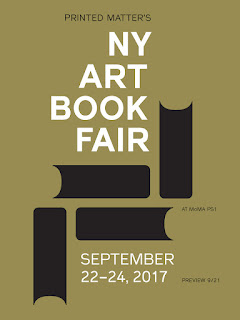 As has been the case for the last few years, I was able to get over to MoMA PS1 in Long Island City, Queens for the annual NY Art Book Fair, one of the largest art-book gatherings in the US. Running for four days, presented primarily by Printed Matter (with a host of sponsors), and featuring over 370 "booksellers, antiquarians, artists, institutions, and independent publishers from 28 countries," to quote the website, it is always a bonanza for arts-based publishing, and the ideal venue to learn about and find books you might not readily encounter elsewhere. I used to go on the first day, but realized the last day--Sunday--is the best for bargains and smaller crowds. The MTA's usual challenges as well as the Sunday travel schedule meant a slightly more involved journey over to Queens, but once there and on the bus, it was a short hop to the venue, which tends to have as many interesting look people milling around outside it as inside.

Last year, I made sure to head to Image Text Ithaca's (ITI) booth to sign copies of GRIND, and they were there again this year, with a number of newly published texts. I had the opportunity to chat with some of the students in their MFA program, as well as with photographer, publisher, ITI co-organizer and my collaborator on GRIND Nicholas Muellner. (I'd just missed author, artist, publisher and ITI co-organizer Catherine Taylor, who'd been there for most of the event.) New Directions, which was there in 2015, skipped this year, though I imagine they'll be back next year with some of their new offerings, including new entries in their pamphlet series. This year, I said I would try to visit every floor, and as many of the rooms and booths as I could handle, within a four-hour window, because the building tends to get a bit toasty and so many exhibits become overwhelming. (This is my strategy for BEA and AWP, etc. also.) In addition, I said that I would not load up on books, or no more than I could fit reasonably fit in one book bag, and I stuck to my vow, bringing back lots of cards, but fewer books and works of art than in the past.

I'm always fascinated by the mix of vendors at the NY Art Book Fair. You have pretty high end university presses, like Yale, for example, and tiny publishers who clearly are a one-person operation.  Those booths and books are often some of the funnest to check out, because the work often is highly original and a labor of love, though I imagine everyone at the fair wants to at least make back the fees for exhibiting, and to develop regular readers and subscribers (for the magazines and zines). Another publisher I always look for is Song Cave, helmed by poet Alan Felsenthal and others.  As in the past, they were in the geodesic dome, with their trove of new and backlist titles. One especially intriguing book of theirs I picked up was an edited volume of Subcommandante Marcos's writings, Professionals of Hope, with an afterward by Gabriela Jauregui, which read like (some of the best overtly political) poetry and philosophy.

One of the things I've noticed over the last few years is that the vendor base is diversifying somewhat, with more (especially young) artists and publishers of color and queer creative figures. This always means that if I can go slowly enough through the booths and displays I'll find some gems I would not see elsewhere. There are also art exhibits, but I chose to skip most of the freestanding ones this time, and booksignings, which I also skipped unless the artist or writer was there at the table. There probably are readings and conversations. I think I'll try to catch some of these next year, because if I'm in town, I will make every effort to be back!

Time races by these days, as it always has, though I've felt it increasing even more over the last few years, and this fall has been no exception. Last spring was a marathon of sorts, and after recuperating this summer, figuratively and literally, a new race has begun. In addition to chairing, teaching, advising, and mentoring, traveling for conferences and readings, and serving as a referee, second editor, blurbist, and all those good things, I was called up for jury duty by the Hudson County Superior Court in September, just as the fall semester began. On the one hand, I understand that peer jury service is a civic duty, and I strong support this key component of our court system.

On the other hand, it came at a very inopportune time, and because I had already postponed it several times over the summer for medical reasons, I could not get another delay, so I had to appear at the court house and see if the lottery would fall in my favor. It either did or didn't, depending upon whether you think getting selected to serve on a horrifying criminal case for roughly three weeks was a positive outcome or not. I did not, though I can say in retrospect that the experience was enlightening and one I will not soon forget. I also will not forget that the some of the skills need to assess literature critically--judiciousness, an eye for detail, the ability to relate texts to other texts, etc.--and to function decently in the classroom, such as listening carefully, being persuasive in arguing points, carefulness in balancing differing opinions, defusing unnecessary conflict, etc., also come in very handy if you are on a jury, even if you are not the fore-person.

A tip to prospective jurors: some things I learned in the jury selection process are that neither the prosecutor nor the defense attorney wants to have anyone involved in psychology, psychiatry, or social work counseling on the jury pool if they can help it. They also do not seem to like people who love police, though expressing concern about police brutality or misconduct does not seem to be a bar to service. Personal experience as a victim of a crime is also no hindrance, though if you were a victim of a crime similar to the one being adjudicated, they will probably politely ask you to leave the courtroom and reenter the jury pool for another case.

As for justice being served, I think that is a much more complex issue. We were told not to discuss the case even after we had rendered a decision--and the defendant, I learned from the news, has several more cases pending on very similar grounds, information that was, for whatever reason, not admitted in court--so I will not go into specifics. But I felt that under the circumstances, we were able to come a decision that was just and fair. Extrapolating from our jury discussions and several jurors' almost unyielding opinions, based not on the facts of the case but on personal beliefs and stereotypes, however, I am even more convinced than before that the possibility of justice is foreclosed as soon as a jury is constituted.

Back to blogging, I have begun a number of posts, dating all the way back to mid-summer, but have not been able to finish them as various other deadlines have popped up. I had the idea that I would try shorter entries, but I find that brief posts that aren't photos or short accounts of events almost as tough as longer ones, since I feel I'm not saying enough. But I want to return to blogging a bit more regularly, and not only talk about the events of the day--which now move so swiftly that unless you blog daily or in some cases several times a day, they're already history--but also return to this site's roots, which is literature, the arts, and cultural issues writ small and large. 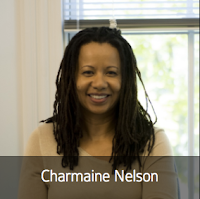 FM: What is the most interesting, surprising thing you’ve come across in your archival research or reading?

CN: I found a fascinating person in the Quebec fugitive slave ads. Part of what I’m looking at is creolization, or how Africans became African American or African Brazilian and so on, and what that meant culturally. This one man—Joe—was particularly haunting. I found five different ads for him, and you can actually map Joe’s creolization across these ads.

In the first ad, Joe is described as a “negro lad”. His owner, a man named William Brown, owns the newspaper—he’s putting an ad for Joe in his own paper. The ad says Joe was African-born, which is significant because a minority of enslaved people are people born in Africa. Slave ships always stopped in South America or the Caribbean first. So, Joe survived two middle passages: one from Africa to somewhere in the American South, and then one to Halifax, Quebec City, or Montreal. William Brown also says Joe speaks English and French tolerably.

By the fifth ad, Joe is a man. He’s fluent in English and French, and he was working as a pressman—he was running the press! Joe must have known exactly what a runaway slave ad was. He had probably been made to formulate, print, and edit ads for his fellow enslaved people. The newspaper he was helping to print, the Quebec Gazette, was owned by the guy who owned him. He must have known Brown would come after him.

But, ads can’t tell you if a person was caught or not. So, how do you finish Joe’s narrative? You can go to other archives and personal letters. But, the real obscenity is that you go to the will or the state inventory of the person who owned the slave. The thing is—William Brown would have had to die before Joe in order for him to be in the will. If Brown dies, Joe is passed down or sold, which was likely because enslaved people had shorter life expectancies. So, my question is: How do you read fugitive slave ads against the grain? They sought to criminalize stealing yourself. How can I use the ads to re-humanize people who were dehumanized?


From the Harvard Crimson's "15 Professors of the Year, 2017: Charmaine Nelson." According to the Harvard Crimson, Professor Charmaine Nelson is "an art historian from McGill University [who] joined the faculty of Women, Gender, and Sexuality...[in 2016] as a visiting professor. Nelson’s work examines art and visual culture from across America, Canada, Europe and the Caribbean. Her research at Harvard concerns fugitive slave advertisements in Canada, challenging the myth that Canada was always a refuge for enslaved people in North America."
Posted by John K at 2:59 PM No comments:

One of the greatest poets in contemporary American literature, John Ashbery, passed away this past week (1927-2017). Ashbery's work has been one of my enduring inspirations, and I have blogged about him numerous times, including on his 90th birthday this past July, when I reviewed Karen Roffman's biography of his youth and early career.


John Ashbery, “Street Musicians” from Houseboat Days. Copyright © 1987, 1979 by John Ashbery. Reprinted with the permission of Georges Borchardt, Inc. on behalf of the author. Source: Houseboat Days (Farrar Straus and Giroux, 1977)
Posted by John K at 5:00 PM No comments: