I have in mind, as I begin this entry, the President's recent visit to his ancestral homeland (one of them), Eire, and Mrs. Obama's sipping of real Irish stout in Moneygall.

"Terence O'Ryan heard him and straightaway brought him a crystal cup full of the foaming ebon ale which the noble twin brothers Bungiveagh and Bungardilaun brew ever in their divine alevats, cunning as the sons of the deathless Leda. For they garner the succulent berries of the hop and mass and sift and bruise and brew them and they mix therewith sour juices and bring the must to the sacred fire and cease not night or day from their toil, those cunning brothers, lords of the vat.
Then did you, chivalrous Terence, hand forth, as to the manner born, that nectarous beverage and you offered the crystal cup to him that thirsted, the soul of chilvalry, in beauty akin to the immortals." --from James Joyce, Ulysses (corrected version), New York: Vintage, 1961, p. 299.

(As I wrote last year, you can find the entire, remarkable novel, Ulysses, one of the greatest ever written in the English or any other language, here.) You can hear Joyce himself reading from it here, at Bedeutung Blog.

As I noted last week, the university's academic year was not yet over, but final grades are now in, and, though graduation doesn't occur until this weekend, but:


CONGRATULATIONS TO ALL THIS YEAR'S GRADUATES IN THE UNDERGRADUATE AND GRADUATE CLASSES OF 2011! 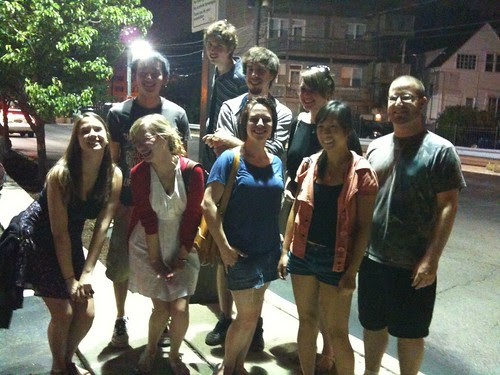 Some of the graduating senior fiction undergraduates, after our bowling match 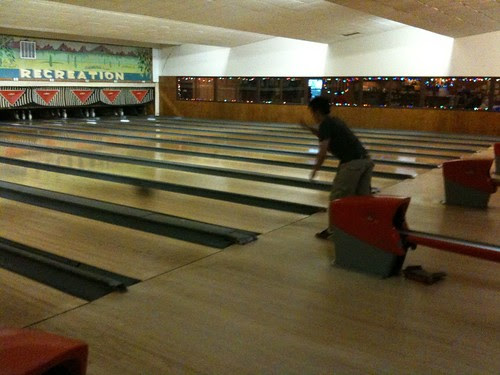 Congratulations to everyone graduating this spring all over the country, and a special congratulations to Kortney Ziegler, who becomes the first doctoral graduate from the university's African American Studies Department PhD program!
Posted by John K at 8:58 PM