A sampling of photos from April and May, two incredibly busy months! 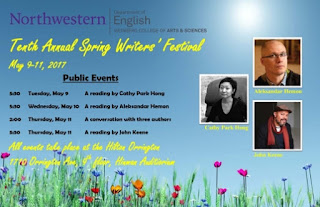 Remove the "10 Annual" portion of this blog post's title, and this could appear to be one of several I wrote during my decade at Northwestern University, including the one marking the fifth annual festival, my last while there, in 2012. In fact, I was there for the festival's creation in 2007. The Annual Writers' Festival arose from a desire to convene during one week and place in conversation distinguished authors from the three major creative genres, poetry, fiction and creative nonfiction, that we were teaching at the undergraduate and graduate levels. When I first taught at NU, each quarter roughly brought a visiting writer from a different genre. The major visiting writer to participate on his own as the undergraduate creative writing guest before the festival began was Junot Díaz, I believe, in the fall of 2007, right after his novel The Brief Wondrous Life of Oscar Wao was published, and just before it received the Pulitzer Prize and National Book Critics Circle Award.

Bringing the visiting writers and literary events together meant that the students would be able to interact with them at the same time, and see them interact with each other. It also ensured maximization of our--faculty, staff, and student--resources. The festivals turned out to be a great success, and I can still remember some of the events as if they had occurred yesterday. Because of them, I had the pleasure of meeting and hearing Brigit Pegeen Kelly read before she passed away; observing George Saunders warmly share his bounty of wisdom with student; watching Nami Mun thrill a room of student writers; feeling my pique soar as David Shields threw down the gauntlet about fiction's supposed irrelevance; and immersing myself in ZZ Packer's novel-in-progress.

It was thus a profound surprise and deep honor to be invited as one of this year's guests, along with two excellent writers, poet and critic Cathy Park Hong and fiction and nonfiction writer Aleksander (Sasha) Hemon, to participate in the tenth version of the festival. Returning for the festival meant that I would have the opportunity to see many former colleagues, creative writers, scholars and staff members, and also be in dialogue with and listen to Cathy and Sasha offer their thoughts and share their work. Since I knew how the schedule unfolded, I knew that I would need to read and be ready to discuss the work of the student writers, prepare a craft talk (on the novella, I decided, since the undergraduate fiction majors and minors were in the midst of writing them), be ready for a guided conversation, and give a reading.

Each of these turned out to be very enjoyable, and given that our festival ran concurrently with a scholarly conference--I even ran into one of its speakers, Philip Brian Harper, who teaches at NYU, twice while there!--and a reading that brought Zadie Smith to campus the same evening as my reading, the strong student and faculty attendance and participation were even more heartening. Some highlights for me were meeting the graduate and undergraduate students, seeing and hanging out with my former coworkers, taking notes as Cathy theorized and discussed what she described as "Speculative Poetics," and hearing Sasha read a powerful nonfiction piece spurred by the election of Donald Trump. It also felt uncanny at times to be walking around Evanston (and to be in O'Hare Airport, the scene of so many waking nightmares), which I had not set foot in five years but felt like I'd only been away from for a week at most. (I did get to see my cousin Raquel, her husband Walter, and their two adorable cats, so that was an added bonus of being back there.)

I owe a debt of gratitude and offer my thanks to the English Department Undergraduate Program in Creative Writing, and all the other festival sponsors. (Thanks to the Evanston Literary Festival, which also listed our events.) Thanks to Jennifer, Averill, Brian, Eula, John, Juan, Rachel, Shauna, Rachel, and Reg, and everyone else who made the festival possible. Thanks also to Cathy and Sasha for their work and fellowship. I really appreciated getting an opportunity to meet and discuss writing by Tara, Sophie, Zoë, Mackenzie, Danny, and Troy. In addition, it was such a pleasure to also see Susannah, Brian, Helen, Harris, and Andrew, and to run into Jay, Jeff and Kate (who were leaving a dinner with...Phil Harper!). It was a great capstone to a long, full semester, and the best way to see Chicago again after a while away.

Here's a write-up by Maddie Burakoff in Northwestern's student newspaper, the Daily Northwestern. Chicago Magazine also picked the Writers Festival as the top arts and cultural event to do that week!

I was so involved I barely took pictures, so the ones above and below are the best of the lot.

It has been eons since I've blogged, I know, but this year so far has easily been my busiest in a while, perhaps ever. I've recited the litany so often I think friends and associates, and most certainly my colleagues, are tired of hearing it, but in addition to my departmental chair duties, teaching, mentoring graduate students (3 MFAs, 1 independent study, 1 TA, two different doctoral committees), undergraduates (2 honors students), multiple search committees, and university committees, as well as various non-university profession-related duties, I also spent a good portion of the semester traveling to continue promoting Counternarratives and my other books, and while I love doing so, the physical and psychic toll of travel, especially these days, is always steeper than I envision.

As the scant entries this year testify, my blogging has especially fallen by the wayside this year. This  saddens me because I enjoy writing on here, and I feel like there's a particular need for it now. (I can also recall how just a few years ago, we were told that Twitter was becoming irrelevant and that blogging would soon be joining the ranks of the dodo bird and the woolly mammoth.) My several entries on the current resident of the White House remain stubs, however, and every day--sometimes it feels like every hour--brings so many new political revelations, bombshells, and shocks that, as was the case during the George W. Bush years, if you miss a week, you might as well wait for the next cluster of horrors and outrages. I think you can reasonably describe the White House's attempted Muslim Bans, its health care bills, its assault on regulations, its draconian budget, and so on horrors and outrages, even for some of Donald Trump's supporters....

But my aim with this entry was not to talk about Trump, but rather to congratulate the Rutgers-Newark (and Rutgers more broadly) Classes of 2017, undergraduate and graduate, and by extension, all who graduated this spring and year.  I'm very glad the semester and academic year have come to a close, but I already miss the students I worked with this year. As I mentioned, I supervised three MFA fiction students, Soili Smith, Matt Weir (whom I'd taught when he was a beginning creative writing student at Northwestern!) and Magally "Maggie" Zelaya, all of whom successfully completed their theses this spring. In addition, Soili applied and was admitted to Rutgers-Newark's PhD program in American Studies.

All of these students, as well as others I mentored and taught, were a joy to work with, and I will definitely miss them, though I'll get to see Soili and Madani this upcoming academic year. Congratulations to all of them and all of this year's graduates!

Below are a few photos from Rutgers-Newark's various end-of-the-academic-year and Commencement events. For the Graduate Hooding ceremony and the actual Prudential Center campus-wide commencement, I wore a purple robe (for my graduate degree from NYU), but a creative writing colleague told me that I need to get the fancier, final degree model, with the fancier hat. Will do!