Tonight I was fortunate enough to be able to attend what I consider to be one of the more important and exciting events occurring during this historic New York LGBTQ Pride week and weekend, Other Countries: Black Gay Expression's 25th Anniversary Celebration at Summer Solstice. It was particular important for me because Other Countries,  a Black gay male writing collective founded in 1986, played a key role in my own development as a writer and artist.  For those who have never heard of the organization, the celebration program's description, which quotes the collective's first anthology, Other Countries: Black Gay Voices (1988), sums it up perfectly:

Other Countries is an embodiment of the passionate belief that the lives, voices and visions of Gay Men of African heritage are inherently valuable. It is founded from the desire to create opportunities for our precious visions to be developed and shared with each other and with the rest of our communities...As our name intends, Other Countries is a celebration of the importance of difference. Not only the difference we share, but our internal diversity as a community; the many voices we speak with, the different pasts and consciousness we bring to our commonality as Gays, as Men, and as people of African descent. 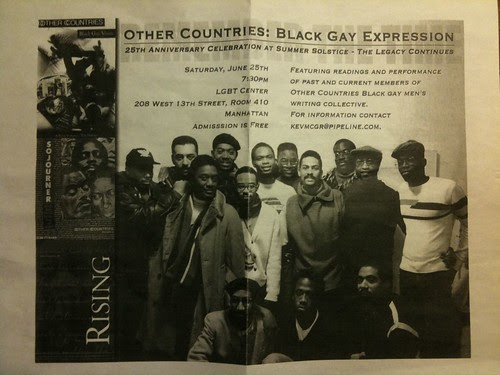 There had been previous Black gay male writing collectives in New York and other cities, including New York's Blackheart Collective, some of whose members would go on to participate in Other Countries. Other Countries built upon this legacy, which included the foundations laid by the Civil Rights, Women's Rights and Lesbian and Gay Rights movements, and more broadly leftist collective and community-oriented self-organization, as well as prior artistic and cultural legacies such as the Harlem Renaissance, whose core comprised many Black gay and bisexual people, and adapted the title of Black queer icon James Baldwin's (1924-1987) novel Another Country (1962) to capture the themes articulated above.

At the center of the Other Countries collective was and continues to be the weekly writing workshops, which initially occurred and continue to take place at the old and now completely renovated Lesbian, Gay, Bisexual and Transgender Community Center, which is still on West 13th Street, just off 7th Avenue. At the workshops participants have presented and critiqued writings across genres, while also reading critical and theoretical texts, discussing politics and social issues, and trying to develop a language through and about which to write their lives, to bring themselves into language.  Out of these extra-institutional critical sessions have come three anthologies, the first listed above; the second, Sojourner: Black Gay Voices in the Age of AIDS (1993); and Voices Rising: Celebrating 20 Years of Black, Lesbian, Gay, Bisexual and Transgender Writing (2007).  Many members of the group, including those still writing, those who have ceased to do so, and those who passed away, also published their work in periodicals and anthologies and as chapbooks and books, and also have presented their work over the years at a range of venues.

I first saw some members of Other Countries perform in Cambridge, Massachusetts, shortly after I'd become affiliated with the Dark Room Writers Collective (which was also inspired by James Baldwin's passing), and almost simultaneously got to know several of the members personally, especially Roy Gonsalves, a superb young poet who'd moved back to Boston at the end of his life.  It is hard to describe the impact first of reading these writers' work, and then of seeing them read and perform it. (Or, as I was very fortunate to experience, reading alongside some of them, like Donald Woods.)  They were not just writing about being black and same-gender-loving, but striving to assert their humanity, to record their existences in all their complexities, at and in an epoch and society that sought at best to ignore them, at worst to erase them.

We have recently been living through such a terrible decade that it sometimes seems, at least to me, to render almost benign by comparison what it was like to live under the Reagan-Bush regime, which also marked the emergence of a scourge that is still with us, HIV/AIDS, though in reality, and as a great deal of the early Other Countries writing underlines, for all time to come, its ravages were far more severe during the moment when Other Countries began.  AIDS felled Roy, Donald Woods, and a number of other Other Countries-affiliated writers, as it slew many other major black gay figures of that period: Essex Hemphill, Melvin Dixon, Joseph Beam, Assotto Saint, Marlon Riggs.... The losses are incalculable, but AIDS did not silence these figures, because their words and work, in addition to having produced a vital public and literary discourse about and around black sgl/gay male life and life with HIV/AIDS, are still with us, just as AIDS and the many other challenges its members have faced have not silenced Other Countries as an organization. As a result today, two-and-a-half decades on, the collective continues to meet, continues to nurture black sgl/queer writing and art in many genres, from music to film, selections of which were on display tonight.

Gordon Easley served as Master of Ceremonies, and introduced each portion of the program, which was divided into Past, Present and Future section.  As part of the "Past" section, historian and longtime Other Countries member Kevin McGruder opened the program by offering an overview of the collective's past.  Filmmaker and writer Robert E. Penn, another longtime member, showed a video that brought together old photographs, video clips of interviews with longtime members, tributes of others who had inspired the group, and more recent events, like the 2007 anthology launch. He also showed book titles born out of or inspired by Other Countries' vital work. Len Richardson offered the presentation in the "Past" section by reading his short story from the first anthology. I didn't tell him this, but as I read, I could remember reading that story several times over.  For the "Present" section, musician Nhojj sang one of his many stirring songs, playing an acoustic guitar as accompaniment, and the poet Dadland Maye followed him and roused everyone with a poetic performance that for me brought back memories of the first Other Countries performance I saw.

The final portion of the evening was the Open Mike, and many longtime members and admirers of Other Countries, including founding member Allen Wright, poet G. Winston James, author and editor Charles Rice-Gonzalez, and playwright and performer Reverend Jeffrey Haskins (who closed out the evening by reading one of Donald Woods's poems), and yours truly read. It was a particular honor for me to read a poem in that, as I noted to the audience, all of my work has in some way been in conversation with and in debt and tribute to Other Countries.  Someday I hope, as Roberto Bolaño did in Distant Star to write into a text a specific tribute, so that it will be clear for all to see.  Although I have never been able to participate directly with Other Countries, I also hope to continue my conversation with its members, living and those who have passed on, and, as I also said, I hope it has many more decades of nurturing creativity among its members and the wider world.