A few random photos from the last month. I've been so busy with school-related work (multiple search committees, thesis projects, etc.) that I haven't been able to get out much. But here are a few images from recent weeks.

Visiting the National Museum of African American History and Culture

Last week I ventured to Washington, DC to attend the annual Associated Writing Programs Conference, which I'll say a little more about in a subsequent post, but one of the highlights of the trip to DC was the opportunity to visit the Smithsonian National Museum of African American History and Culture (NMAAHC). Designed by British architect David Adjaye in conjunction with the Freelon Group and Davis Brody Bond, the museum sits on the National Mall, across the road from the Washington Monument. Long in planning, the NMAAHC was authorized for construction by the Congress and George W. Bush in 2003, and opened in ceremony led by the United States' first African American president, Barack Obama, last fall, September 14, 2016, to considerable acclaim for its architectural beauty and substantial collection.

I'd been warned that acquiring tickets to the NMAAHC would be a challenge, but a colleague, Tayari Jones, was able to score me a ticket for 3:15 pm, and I made sure not to be late. The NMAAHC's building immediately commands the eye, rising in bronze from its site like a series of stacked wicker baskets or bowls that both convey solidity while also shimmering with the shifts in light. (The bronze carapace aims to and convincingly symbolizes a Yoruban crown, invoking one of the ethnic groups from which a sizable portion of African peoples in the New world share descent.) As it turns out, the museum is too large to see in one day, so I chose to head to the historical section, which presents a rich panorama, full of visual and material artifacts, from the 1400s through the present day. To view this section, museumgoers have to descend in an elevator to the bottom-most floor, and then slowly ascend, via a ramp, stairs and escalator, to reach return to the ground floor. In essence, everyone viewing this portion of the museum is physically and symbolically in the ship and in the hold, to borrow two key phrases from Christina Sharpe's remarkable study In the Wake: On Blackness and Being (Duke, 2016).

On the day I went, the afternoon crowd wasn't especially heavy at first, though my cabdriver assured me that the museum was, in his experience of the last few months, the most and best-attendance attraction in the city. By the time I'd begun the tour, however, the waves of museumgoers, of all races, ethnicities and backgrounds, began increasing, and I found it a challenge at times, especially at the beginning of the exhibit, to linger over the displays and artifacts. It was also at times uncanny to read the plaques and descriptions, since I was familiar with much of the material from prior study in college and personal research, including in preparation for Counternarratives and other works, but I nevertheless found myself learning a lot that was new, and was impressed at how well the exhibits accessibly contextualized the various eras and moments from the dawn of the Atlantic Slave trade through its decline and the Civil War. At times I found the artifacts so moving I was moved nearly to tears--and at least once did tear up. Among the exhibit's revelations for me was a flag by the Bucks of America, an organization of Revolutionary War veterans whose members included a historical figure who serves as the model for the protagonist of the novel I'm currently working on; another was a whip, formerly wielded by a plantation overseer, whose metal end and thick cording exceeded most models you would find today and emblematized the brutal conditions of African American labor not only in the past but today.

As I walked through the exhibit, taking notes and snapping photos (which are, thankfully, allowed), stopping to discuss the experience with friends, and frequently moved by what I was seeing and reading, I felt incredibly grateful that this institution now existed, that millions of people would have the opportunity to see and experience it, that millions of black people, from the US and across the globe, as well as million of non-black people, would be able to walk through its rooms and learn and see and feel. What I also felt and feel, however, as a black person, as an African American, is that one museum or even several dozen, if one adds in all the smaller and single-person related museums, the various Civil Rights memorials and museums, and various key archives, collections and monuments, will only scratch the surface of my and the collective black experience, especially compared to the many thousands of museums, as well as the vast and expanding network of interlinked and dominant media, dedicated to white people, European culture, and so forth, that exist all over the United States and the globe. That said, the NMAAHC is a gift to the country and the world, and I highly recommend visiting it. I plan to return as soon as I can, to explore more of it. To all who made it possible, I say thank you! 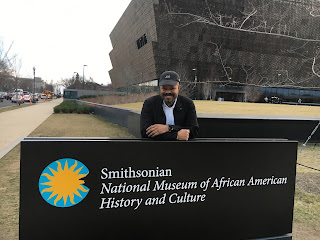