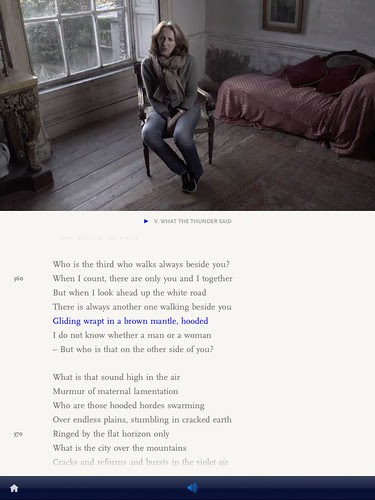 Whither publishing today, in this era of e-books and apps, and whither especially poetry publishing, which faces its own set of genre-specific issues? As Reggie H. (naturally) alerted me this morning by sending along the Guardian UK I cite below, the venerable British publishing firm Faber & Faber, in conjunction with Touch Press, an app development/publishing company, suggests through its extraordinary new offering one likely direction for the future, with its Waste Land app. I kid not.

Touch Press takes one of the landmark works of 20th century Anglo-American and world literature, T. S. Eliot's (1880-1964) 1922 long poem, The Waste Land, and, using apps' multiple electronic and digital resources and the iPad's display capabilities, brings Eliot's poem to life in a strikingly refreshing and enthralling way. It's no gimmick, I assure you. Here's the Guardian UK's video report on it, which describes how the app came about.

Not long after Reggie sent me the link to the Guardian piece, I came across Laura Miller's Slate article on the new app, "The Waste Land": T.S. Eliot takes the app store," which walks readers through the app and argues that it represents the best example of how to make a "digital book." So what does the app comprise?

You get, in very easy-to-navigate format
This list barely captures the true interactivity of the app, which allows you even with all the gewgaws to, if you please, read the text straight through, as you would in book form, but also, you can, as I've done, read along as Fiona Shaw performs it or even just watch Shaw do her thing. As I said, the text, considered to this day a forbidding work of Modernism, comes alive in ways I'd not considered before. What Faber & Faber and Touch Press have created is perfect for the classroom, but also for anyone interested in poetry, especially Anglo-American poetry.  What also makes it work is the depth of Eliot's masterpiece; it can stand up to all the digital treatment and doesn't suffer from nor is overshadowed by it. The poem has many layers, as scholars have shown since it first appeared and as Eliot's peers quickly recognized, to peel away, savor, mull, return to. A lesser work might not hold up so well, and a work written directly for this sort of publication would probably come off differently, but Eliot's text suggests that masterworks of this kind--I think immediately of Walt Whitman's Leaves of Grass, or Herman Melville's Moby Dick, or Jean Toomer's Cane, or, going further back, any of William Shakespeare's plays, or Dante's Divine Comedy, as being possible options, and see this as the leading edge for the future. (Imagine Erich Auerbach's famous discussion of the Divine Comedy, for example, alongside a number of others being woven into an edition of that book.)  Another option might be Abraham Lincoln's or Frederick Douglass's speeches, if those don't already exist, or a work constellating a range of texts--like The New York Times's Disunion series around the US Civil War. For an enterprising publisher with the resources and interest to work with a work in the public domain, there's no limit. It also suggests to me--as I'm sure it will to others--another and exciting possibility in terms of scholarly editing and publication. This might be what scholarly editions look like, at least to some extent, down the road.

As I mentioned to Reggie, after watching the Guardian piece and reading Miller's report, I had to purchase the app, which is $15 (not cheap, of course, especially given the usual app range of .99-$10), and I'm glad I did. Here are some screenshots of it. 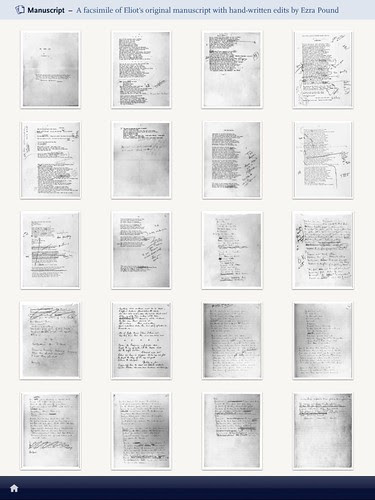 A screenshot of the facsimile pages 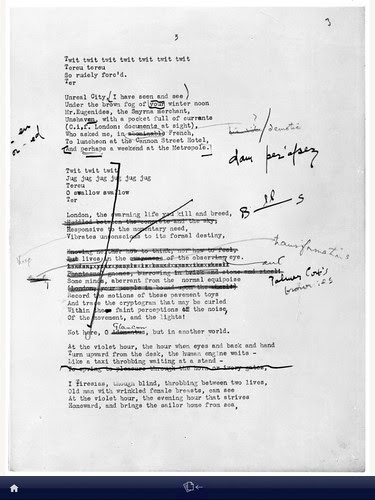 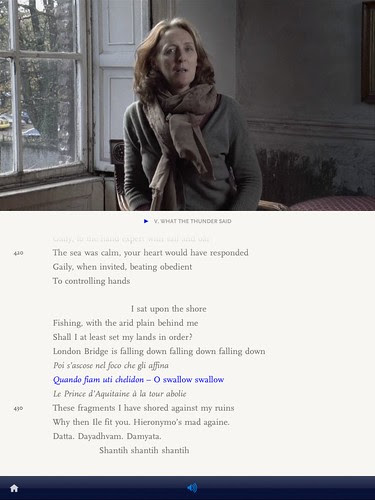 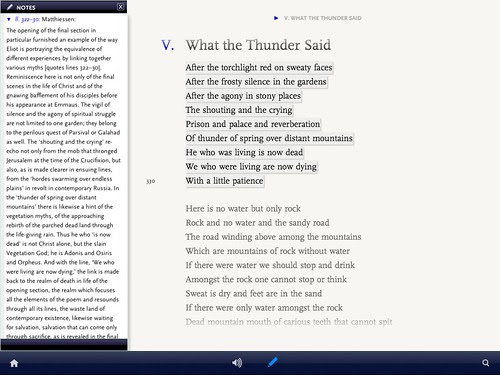 A screenshot of the app with the notes/annotations at left 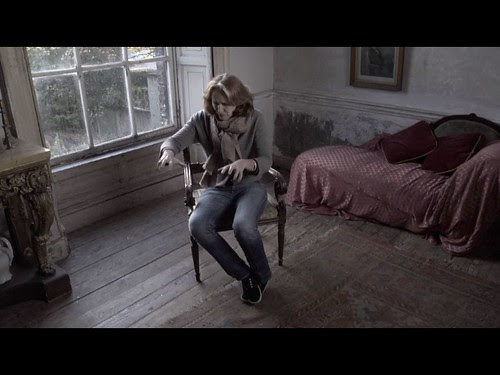 A screenshot of Fiona Shaw performing the poem

This is not the first time someone has adapted The Waste Land for new technologies. An older example is this hyperlinked version, which would have been pretty advanced 15 years ago, and which still represents a heightened and very useful option for exploring Eliot's poem. My own introduction to The Waste Land after high school--and I admit to having been somewhat obsessed with Eliot as a teenager--came in my freshman year, when I conned my way into Joel Porte's "American Modernist Thought," most of which went over my head, at least the theoretical parts, but I do vividly remember the marvelous facsimile version of The Waste Land that we read, and I was shocked by all of Pound's excisions. He was, as Eliot rightly noted, at least in this effort, il miglior fabbro, the dedication he added in 1925.  I will be returning to this app again and again, I think, and hope that other publishers, along with Touch, keep producing works of this sort.

It just might get more people reading and thinking about not just poetry, but literature and the arts and humanities in general.
Posted by John K at 8:34 PM