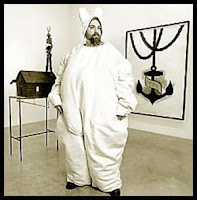 "In terms of my work I see myself as a very radical formalist. I feel taht if something would be better expressed in the form of a newsletter, then you should go out and make a newsletter and distribute it in the ways that newsletters are distributed, don't make a piece about newsletter and put it in a gallery. I see my curatorial activity now as being able to engage ideas that interest me but that I may not be able to workout though my own production, that might be better served by bringing together the work of other artists. I see them very much in terms of a continuum. It's the same thing with activism—I believe that if you want to get a new drug approved by the FDA, you go to the FDA and you scream at them until they do something. You don't go make a painting of a tortured person in an interior yelling, and then exhibit that in a gallery and expect to see any real change in your material situation, because there are many societal conditions that galleries cannot address."

"My pleasures tend to be tied to the intellect. I had a very books upbringing; I read a great deal and I'm into the physical reality of books. There's a moment in reading where you're almost in a suspension within the text and then things come together, connections happen. That type of pleasure, that moment of seeing ideas take form is the sort of thing that I want to have happen for the viewer, in the person who encounters my work."

"I think that in general people are very tired of identity politis. The artists are tired of it, both those who are self-identified and those who are not. We need to come to some point beyond the acknowledgment and tolerance of diversity, which has been the aim of most civil rights movements. We need to move to understanding diversity and delighting in it. I think that is something that we as a people are very far from, because we seem to very quickly forget the possibilities for a connection when we have our back sagianst the wall. We have had our backs against the wall for nearly fourteen years in a very specific way. The Reagan administration set about dismantling the social and emotional social fabric of the United States. As a result they have bred embattled enclaves of suburbanites who live in desperate fear that their containment strategies (e.g., of people of color, or the por) will fail and that they will be overrun and their children won't have anything to look forward to but chaos.That entire mindset was fostered by this Republican administration for twelve years.That blatant attack on the social fabric of this country has really been devastating and I do not see any leader attempting to address that. I see leaders attempting to argue for their own dignity within their difference, but not in any sense being able to argue for the reweaving of our social fabric."