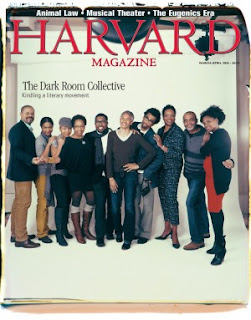 Other pieces about the organization--which I belonged to for many years-- are much better; in 1996, two years after the Dark Room's final reading series occurred in Boston, one of the Dark Room's most honored poets, Cornelius Eady, penned a brief piece with Kwaku Alston, "Reading Ahead," for The New Yorker that was much more on the mark, and in 2013, co-founder and poet Sharan Strange wrote an entry, "Total Life Is What We Want’: A Brief History of The Dark Room Collective," for Mosaic magazine that not only shared aspects of the organization's history but her vision of what its aims were and her sense of its place in the firmament of African American and American letters.

There have been other pieces, but one of the most recent entries, Sophia Nguyen's thoughtful, capacious, beautifully written article in the March-April 2016 issue of Harvard Magazine, "Elbow Room: How the Dark Room Collective made space for a generation of African-American writers," ranks among the best. Not only does Nguyen get the history and names correct and quickly dispel the fact that all the members went to or met at Harvard, but she also offers an overview of what the Dark Room's activities meant in their contemporary moment and might signify today, while not trying to use the writers and their works as a way of bashing particular traditions in the Black literary tradition (the Black Arts Movement, Umbra, etc.), or misreading the literature or cultural effects that have emerged from it.

The impact on the Boston literary scene were visible to anyone who was paying attention. As she notes:


“The Dark Room Collective was one of the more influential movements in the city of Boston,” says fiction writer Don Lee, an associate of the group. Lee, who first moved to the area to pursue his M.F.A. at Emerson College, and then became editor of the journal Ploughshares, observed how they shook up the “lily white” literary scene. “There was terrific energy, and it was contagious.” He helped write a grant application that secured the Dark Room $12,500 from the Lannan Foundation—“not a huge amount, but at the time fairly significant”—which helped cover the travel expenses of writers they were beginning to invite from farther afield.

Nguyen, however, goes further and talks about the "Drive By" readings, and much more, showing that the Collective, more than anything else, helped to create and expand a conversation which involved paying attention not just to what was happening in Boston, to the literary past and to peers around the country.

She also broaches critiques of Dark Room writers' work as "depoliticized" and "conservative," but as she goes on to suggest, as I would underline, works as diverse as Kevin Young's To Repel Ghosts or Natasha Trethewey's Thrall or Thomas Sayers Ellis's Skin, Inc. or Tisa Bryant's Unexplained Presence? These are all deeply political, and formally playful to challenging works, and they're only a small portion of what Dark Room writers have produced. Playwrights, visual artists, musicians, filmmakers, and scholars who were affiliated with the group have gone on to produce work that is both politically engaged and aesthetically challenging as well, and without question, all the various strands of black cultural production, from the past up through the Dark Room's moment, on through today, are visible in the art that has emerged from it.

Here's one more quoted paragraph that gives a glimpse of what the Dark Room was really like:

What the Dark Room gave to its members makes their output difficult to corral. It’s something Ellis has called “elbow room”—a jostling freedom of movement that made Bryant, all those years ago, feel unexpected exhilaration during her 40-minute phone interview with the Collective. Though she at first tried to fake a love of jazz and the blues—at the time, these genres were to her parents’ taste, not hers—she then admitted to being a fan of the Cure, the Smiths, and Siouxsie and the Banshees. “And it was the most miraculous thing, because suddenly we were doing these bizarre medleys of Smith songs and P-Funk and Run DMC and Billy Bragg and Psychadelic Furs and Joan Armatrading. It was outrageous,” she told her interviewer. In “Dark Room: An Invocation,” Elizabeth Alexander declares “the house/came down because/we knew how to read/each other, could code-switch/with the same fast dazzle.” Now it’s a critical commonplace to hear that some Dark Room writer can reference Homer and Tupac in the same space, making virtuoso maneuvers between different expressive registers. At the time, Bryant said to herself with relief, “Okay, I’m not the freak I thought I was.”


Do check the article, and the poems Nguyen quotes. They're a great place in the Dark Room literary corpus to start.
Posted by John K at 10:50 PM No comments:

A month or so ago on Facebook, I casually mentioned that I'd taught an undergraduate course in Black Literary Avant-gardism at Northwestern, most recently in 2010, and figured that that would be the end of it. The response, however, was enthusiastic, with a number of people asking me to share the syllabus. Northwestern never required us to post syllabi publicly, as Rutgers-Newark does, and I was amenable to sharing it, though I wasn't sure where I might do so. Here was the most likely spot.

Then Mieke Chew of New Directions asked me if I would be interested in presenting it there, and I was. After she distilled it a bit, removing dates and so forth, it went live. I intended it to be neither comprehensive nor exhaustive, and if I were to teach the course today, in addition to a longer calendar, I'd add more and new scholarly texts and draw from the rich store of contemporary innovative black writing, including digital work.

So here is "Temples for the Future": 20th and 21st Century Black Literary Avant-Gardes."

I should note that I do not have an electronic course pack, but a number of the articles and shorter materials can be found in the special issue of Tripwire featuring giovanni singleton's and Renee Gladman's famous conference black innovative writing, as well as The Harlem Renaissance Reader.
Posted by John K at 11:12 PM No comments:

I have been checking the New York Times every day to see what photographs and stories will be featured as part of its "Unpublished Black History" series, which it debuted this year for Black History Month. In essence, it is a catalogue of material, often newsworthy in some way, that nevertheless failed to make it into the paper. In some cases, the Times editors approach candor about why they did not publish the images or stories, but in other cases, some quite fascinating, they do not.

It's hard to know, lacking documentation of some sort (notes, audiotaped material, etc.) or the direct comments of the editors, writers and photographers themselves, why some of these key moments were passed over, but it also underlines the fact that even today, and not just with Black History, editorial choices of various kinds shape what makes it into the mainstream news and what gets complete passed over. As I view the photographs and read the brief entries, I keep wondering, what led to this story being skipped and others receiving coverage? This would be a great subject for the Times to devote one of its roundtables to.

A few images from the series, which you can find here (in reserve chronological order, going back to February 1):

The African Poetry Book Fund, in conjunction with the journal Prairie Schooner, has named poet Safia Elhillo the winner of the 2016 Sillerman First Book Prize for African Poets, for her manuscript Asmarani! As a winner, Elhillo will receive $1,000 and the University of Nebraska Press will publish her manuscript in 2017. As a member of the judging panel, which also includes the stellar writers Bernardine Evaristo, Matthew Shenoda, Gabeba Baderoon, and Kwame Dawes, who edits Prairie Schooner and directs the APBF, I can say that it was stunning read, and wholeheartedly congratulate Safia Elhillo!

Safia Elhillo, a Sudanese writer "by way of Washington, DC," received her MFA from New School University, and was a joint winner of the 2015 Brunel Poetry Prize. She also is a Fellow of Cave Canem and poetry editor at the journal Kinfolks, and will have a chapbook, also titled Asmarani, appearing as part of the New Generation African Poets: A Chapbook Box Set (Tatu), from the African Poetry Book Fund with Akashic Books.

Here is one of Safia Elhillo's poems, from Big Lucks, Issue 11, December 2015. It gives a sense of her work as a whole, but do check out both the forthcoming chapbook and the entire collection, which will be out next year!

Earlier this week I learned that the little art book project, GRIND, that I collaborated on with photographer Nicholas Muellner this past summer at the unforgettable Image Text Ithaca at Ithaca College, is now a book, edited by Nicholas and Catherine Taylor, designed by Elana Schlenker, and published by ITI Press! It makes its debut at this weekend's Los Angeles Art Book Fair at the Geffen Contemporary at MOCA, and will be available at ITI Press's booth.

If you're interested you should be able to order it directly from the press very soon, and please also check out their other books,  Tessex!, by Earl Gravy (Emma Kemp and Daniel Wroe), Bobby Schiedemann, Analicia Sotelo and Thomas Whittle, with contributions from the Best Friends Learning Gang and Jodie Herbage, and Andre A. Bradley's Dark Archives.

Below are a few photos of the book (all from designer Elana Schlenker's website), which I cannot wait to hold in my hands! 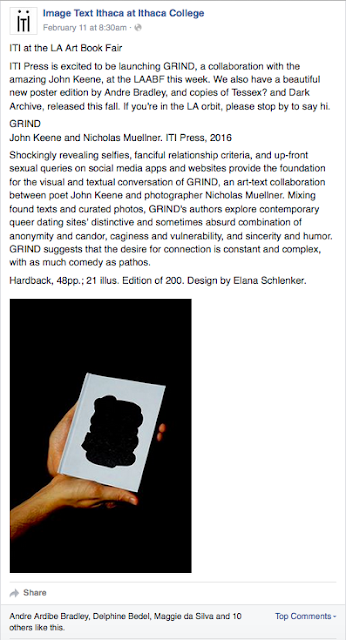 February 1 is also the birthday of Langston Hughes (1902-1967), who needs no introduction. As in past years, in honor of his birthday and of Black History Month, I'm posting a Langston Hughes poem. (One of the joys of my life these days is that I always was able to memorialize and celebrate him for posterity in my story "Blues," in Counternarratives.)

Below is Langston Hughes's tribute to the late Jacques Roumain (1907-1944), one of Haiti's greatest poets, whose work, including Gouverneurs de la Rosée (Masters of the Dew) Hughes translated. The friendship, dialogue and political affinities between the two poets was significant, in part because of the links Roumain had made with African American writers during his period of exile from Haiti. Hughes, like many of his peers, mourned the death of the brilliant, anti-imperialist, Communist-affiliated ethnographer, poet and fiction writer Roumain, at age 37, in 1944.

In fact Hughes published the memorial elegy to Roumain, a Communist, in the October 2, 1945 issue of New Masses. I don't think it's Hughes' best work, but am fascinated by its tenderness and the ways in which Hughes invokes the Diaspora and links black--and Haitian vodoun specifically--culture to politics ("Erzulie to the Pope, / Damballa to Lenin / Haiti to the universe) throughout. The dialogue, Hughes suggests, continues even after death. 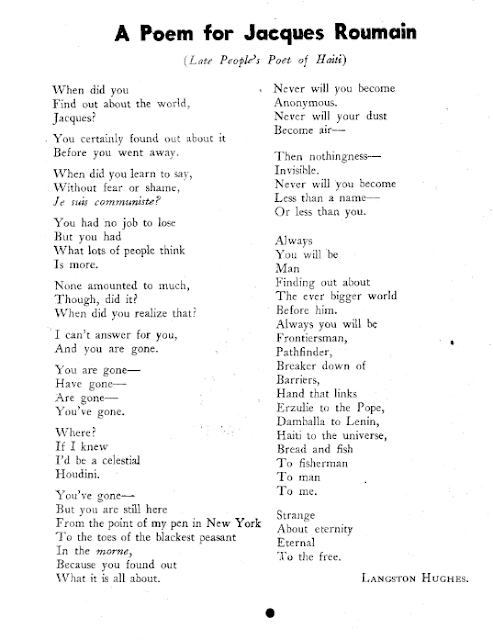