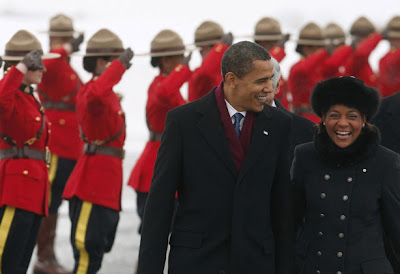 President Obama and Canada's Governor General, Michaëlle Jean, at his arrival in Ottawa, for his first foreign trip.
Posted by John K at 6:39 PM No comments:

I guess I shouldn't have spoken too soon about burrowing--clawing, carving, wrenching--my way out of the grave, because fresh shovel-fulls of reading material just keep falling, but I did manage to have an enjoyable weekend (a belated Happy St. Valentine's Day to all) at and around the Associated Writing Programs Conference, which took place in Chicago this year. The conference began on Wednesday and concluded on Saturday, and as always, it was overwhelming and invigorating (sooooo many panels, writers, books, conversations, etc.), though I would lean on the side of invigorating, since I woke up every morning exhausted but ready to head downtown to the Chicago Hilton for more. For me the highlight of these conferences is running into folks I haven't seen in years or since the last one or the last visit to their town or campus, and so while many of my friends and literary acquaintances didn't attend this year, many were in the house. Seeing fellow Cave Canem or Dark Room (or Kundiman or New York in general) writers always brings a smile of joy to my face, as does former colleagues and writers I've admired for years and never met or heard, or met and heard once, or met and heard many times. There were many such moments this year.

I was on two panels on Thursday, the first a noon assembly called "The City--Real and Imagined," with my very famous university colleagues Reg Gibbons (the moderator), Sasha Hemon, Alex Kotlowitz, and Stuart Dybek, and that discussion drew a huge audience, including several of my graduate students (Jen I said hello to, but Anna, it was great to see you out there), and friends like wonderful poet Jaci Jones LaMon, who came up afterwards to say hello. I had the opportunity to expatiate, briefly, on Morrison, Ellison, Paley, and Proust, in one answer, which I must say doesn't come along very often. The second panel, later that afternoon, which I organized and moderated, focused on "Post-racial Writing," and brought together scholars Dorothy Wang and Angelica Lawson, and poet and critic Prageeta Sharma. All three offered provocative critiques of the notion of "post-raciality," and I only wish that we'd had more time to unpack the idea even more, particularly in light of my opening comments about perspective, performativities and normativities. The audience was one of the most racially and ethnically diverse I witnessed at the conference, and it was particularly great to see poet Samiya Bashir (!) sitting in the front row.

Thursday evening I participated in a full and packed reading at Myopic Books (one of the best used bookstores in Chicago, BTW) sponsored by Litmus Press/Aufgabe, Saturnalia Books, and Nightboat Books. Afterwards a poet archly asked me, "And what is your connection to these presses?" and I reminded him that some of my work--among the first published poems from Seismosis--appeared in Aufgabe. Other readers that night included Nathalie Stephens/Nathanaël, one of my favorite contemporary innovators, whose marvelous new book-length essay, Absence Where As, is out from Nightboat; Jennifer Scoppottone; Cal Bedient; Sebastian Agudelo; Lytton Smith, whose first book Terrance Hayes selected for Nightboat's most recent annual prize; and Laura Moriarty, whose work I've admired for years. Jennifer and another poet read from Italian translation section in the new Aufgabe (#7), and I urge you to pick it up if you're at all interested in new Italian poetry.

On Friday, after going to hear Maggie Brown's tribute to her late father, Oscar Brown Jr., and Deedee Bridgewater and an ensemble (including original sidemen Julian Priester and Ray Mantilla) bring the late Max Roach's "We Insist! Freedom Now Suite" to new heights (thank you again, Dorothy!), I dropped by the Second Sun Salon, hosted by Krista, Duriel and Lisa Lee at Lisa's dream space. I'm not going to be able to list all the folks I saw, but it was great to run into people from the Chicago poetry scene like Erin Teegarden, as well as so many people I hadn't seen in a while, including Denenge Akpem, Christian Campbell, Kelly Norman Ellis, Ross Gay, Tyehimba Jess, Parneshia Jones, Dawn Lundy Martin John Murillo, Obike, William Perdomo, Hermine Pinson, Evie Shockley, Treasure Williams, Ronaldo Wilson, Avery Young, and to meet folks I've only know via the Net, like Lillian Bertram and Doc Brown, or via their work, like David Mura. I caught the second half of the Salon performances, which featured John and Duriel performing their poems, and Avery performing Averyness! I only wish there'd been live feed so that everyone could have enjoyed them as much as the people at the event.

On Saturday I popped into a few panels, ran into a lot more people, including many university colleagues (Eula Biss, Shauna Seliy, Brian Bouldrey, Ed Roberson) and students (Barbara, Eric and others), whom I was so glad to see out and about, and spent a great deal of time at the Bookfair. So many books, so little time! I must give shout-outs to Essay Press and Canarium Books, founded by my colleagues Eula (and others) and Robyn Schiff (and others) respectively; Seismosis's publisher 1913 Press, and its founders poets Sandra and Ben Dollar (whose stock was snapped up, yea!); Northwestern University Press, and editor Parneshia Jones, who hipped me to some great new books they're publishing; and the PEN table, where my college friend Stacy Leigh was representing with grace and wit only she can! So far I've been able to read just one of the many books I bought, Monica de la Torre's incisive and often hilarious Public Domain (Segue Books, 2008), but I'm determined to scale the K-2 peaks of books I've been setting aside and viewing with waxing anticipation since the relentless academic year began.

And now, some photos (my ability to document via photographs appears to be diminishing at the same rate as my ability to blog or do anything else, save teach and read for work, but nevertheless):

Listening to the Salon performance (Christian Campbell at center)

The brilliant and beautiful Tayari Jones

Ron Kavanaugh and Toni Asante Lightfoot (this was the first time I'd seen her since her new daughter was born!)

Up From the Depths

Up, from the depths, but only temporarily. I was trying to think of the right word to describe this quarter, this January and February, the steep and suffocating mound of work, and the feeling of being buried and being unable to get out from under it, to imagine a way out of or around it, and I realized, when Chris was here a few weeks ago, that I'd mentioned it in a conversation with him: vivisepulture. Which, I reminded myself, will be a title of a new project. Slowly, surely, I'm climbing up out of it, eyeing my way out of it at least, but there's still a long, ascending incline to go. And blogging, which I love to do, unfortunately has to come last on the list. But rather than let this month (Black History Month, no less!), pass by without at least an initial post, here I go.

Blackboard work, after my lit class (one of the few fun things I do every week)

A weekend ago, Tisa Bryant and Duriel Harris were in town for the final week of Jennifer Karmin and Amina Cain's month-long festival at Links Hall, "When Does It or You Begin? (Memory as Innovation): Writing, Performance, & Video Festival." I caught the Friday night set, which brought together Tisa's and Duriel's performances, as well as video clips by father and son team Bryan & Jake Saner and Chi Jang Yin.

I've read Tisa's book, Unexplained Presence (Leon Works, 2007) in various versions, but I'd never heard Tisa read from the book, and it was a revelation; she read from the Dido chapter, and the charged narrative, which gathers tremendous force all the way up through its final words, a figurative and literal gathering up of the disparate (black) voices she imagines in the London in which that story-essay is set, are still resonating for me. Duriel performed a selection from a new project, "Unquiet Borders & on the Air, a Gallows," which imagines the moment following Emancipation and preceding Reconstruction, in a way that only the multivocal, multivisional Duriel can. The two video pieces worked less well for me, in part because I thought both could have used a bit more context in the form of an introduction, and in the case of the Saner piece, The Inaudibles, which focused on young and older political activists, the divergent strands didn't really come together in the short sliver that I saw. In the post-show talkback, both Tisa and Duriel offered some cogent thoughts in response to the lively questions that moderator Tony Trigilio was asking, particularly in relation to how historical memory, cultural memories, and the lived, everyday experiences of regular people, could be viewed in relation to each other.

Here are some photographs from the event:

A still shot from the Saners' film, The Inaudibles

The following night, I went to a forum and community discussion, presented by The Silver Room and Tres, on the "Social Responsibility of the Artist" at the Silver Room, in Wicker Park. The panel featured artists Theaster Gates, Jon Bollo, Maritza Cervantes, Courtney Jolliff, and Krista Franklin, among others. Hector Rivera and Sandra Ivelisse Antongiorgi moderated. I won't attempt to recap the discussion and Q&A session except to say that the panelists and most of the audience came down on the side of social responsibility, while also agreeing that artists ought to have as their primary concern doing the best work possible. The l'art pour l'art crowd was a decided minority. Some photos:

The panel (Krista is wearing the white sweater)

The audience at the forum

The DJ getting ready for the post-forum party

I'll end there, and try to post photos from Tisa's, Krista's and my trip to the Museum of Contemporary Art, where we caught the Jenny Holzer and Theaster Gates exhibits, which were closing on February 1.
Posted by John K at 8:28 PM 1 comment: