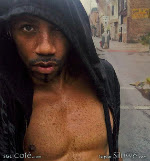 Earlier today via Rod McCullom's (@RodMcCullom, Rod 2.0) Twitter feed, I learned of the passing of Taylor Siluwé, a fellow blogger, writer, NYU alum and Jersey City resident. A native of New Jersey's second city, he was 45. I think I met Taylor in person only once, a few years back, but I do have a copy of one of his erotic novels, Dancing with the Devil (SGL Café Press), had read his articles in publications like Out IN New Jersey and FlavaLIFE over the years, and I would periodically check in on his blog, SGL Café, which offered a lively mix of news, commentary, and celebration of black same-gender-loving/gay life.  I must admit that I haven't looked at it in a while, and so I was unaware that he had been diagnosed with Stage 4 lung cancer in May and was dealing with it right up to this past Sunday. He had even begun to photoblog and write in detail about his struggle. Rod's summary of his cancer ordeal and of his work encapsulates so much. I'd only add that the signature "Taylor Siluwé," which I'd come across on many a blog, always underlined a passionate, thoughtful comment. William Johnson's obituary at Lambda Literary is here. You can read a snippet of his young adult work Something about Sin at Scribd here. Fare thee well, brother....

I haven't seen any of this summer's blockbusters, which would include the comics-to-films barrage that Hollywood has latched onto for some years now, but I do periodically read Armond White's reviews in The New York Press, and I have to say, I think I've spared myself nearly $40 (or whatever movies + a soda + popcorn, etc. cost these days) and my usual frustration and disgust at racist stereotypes by skipping Thor, X-Men: First Class, or Green Lantern.  My patience after 46 years has really grown thin. From what I gather from "Mean Green," a June 18, 2011 review of Green Lantern by Mr. White, a brilliant, incendiary critic who never stints on calling things what they are, or scanning through to their core, these portrayals (by Idris Elba, Edi Gathegi, and Michael Clarke Duncan respectively) are not as hideous as past depictions, but they remain locked in a stereotypical social and cultural logic that really should have disappeared with the last century.  I should note that Ta-Nehisi Coates had already and powerfully broken down Green Lantern's racial obtuseness in his New York Times opinion column debut several weeks ago. Since films are global nowadays, these tiresome, racist depictions don't just warp the minds of children in Chicago and Chattanooga, but like all the products of America travel here and there, doing their wretched work. Unfortunately so long as they're making money there's no way to stop them, and all the complaining in the world--my complaining, which I've done for years--isn't going to change anything, I now realize, not that I'm about to stop it. I guess I should be thankful that I'm not required to watch them, either because of a job (like White) or young ones (like Coates). Still, as White says at the end of his piece

Green Lantern should be better than it is but improvement would begin with sustained enlightened casting and characterization. What’s happened in comics movies this year has not improved on the casting in 1930s Hollywood serials. Actress Sanaa Lathan (star of Alien Vs. Predator) recently snapped “Nothing has changed!” when describing her role as an embittered 1930s black film actress in Lynn Nottage’s current play Meet Vera Stark. Lathan and Nottage’s collaboration is more meaningful and entertaining than all the comic-book franchises—or any other Hollywood movie—so far this year. Stereotyping has gotten so bad that smart viewers have come to expect the insult. They know beforehand that if it’s an action movie and there’s a black guy in it, his doom is certain—the ultimate spoiler.