Fourteen years ago, on February 27, 2005, I began blogging at J's Theater. I was regularly reading the blogs of friends and writers, artists, political commentators, and others I'd never met but felt a desire to be in conversation with, and so I started this blog. I viewed it as a creative and cultural space, with far less emphasis on politics and responsive to the news cycle--which has sped up incalculably more these days now that Facebook and Twitter have taken off--than it has assumed at various points. More than anything, however I wanted it to be a site where I could try thoughts and ideas out, imperfect as they might be, without the usual concern of perfection or even the struggle, customary as well, to get them into print. (My entire writing career has entailed a struggle to get my work into print.)

From writing about poetry and poets, like Jay Wright, as I did in my first post, to my life and experiences at the university (which has become a new university over the years I've blogged), to reviews of books and films, to snippets about Black history, art and culture, and history, art and culture over all, to translations from Portuguese, Spanish, French, and, I sometimes am amazed to admit, Dutch and German, to posts about rugby, track and field and other less popular (in the US imagination, at least) sports, my iPhone and iPad sketches, and on and on, J's Theater has provided an ideal space for me to explore, (mostly--haha!) pressure-free, as I see fit. It also has served as a site of documentation at times for cultural activities, and especially was so during my decade in Chicago, which wasn't even a decade ago but feels like a lifetime has passed between then and now.

I've repeatedly debated whether to keep blogging or to quit. One great frustration after the earliest years (2005-2008 or so) was the sharp drop off in comments, which were for a while replaced by spam, which disappeared (thanks, Blogger?), only to reappear in recent years with a vengeance. It thankfully is very easy to delete these days, but that requires its own dedicated attention. Far more pressing were my academic responsibilities, which have grown to include 12-month administrative duties that devour more mental space and energy than I ever imagined. I don't think it's any surprise that before this year, 2014, the first year I became a department chair (acting during that year) and 2017, just before my last sabbatical, saw the fewest posts. It was not for lack of interest, but time and vigor.

Not so long ago, we were told that blogging was dead. No one blogged, everyone had moved to YouTube, Facebook and Twitter. And Tumblr, which was and is a blogging platform that in essence mostly deprioritized words. (It also has banned not just pornography, but nudity in general, that's another matter.) And Instagram, which is all pictures (for the most part). And Snapchat, of course. Now there's Tiktok, and other walled gardens. One thing I loved and still do about blogging (though to its credit, Twitter also is almost fully public) via Blogger, WordPress and similar sites is that whatever you published was and remains visible to all; a private company does own this platform, but the blog remains more a public square-style venue than many other options out there. For good and ill, of course. The dazzlingly brilliant Kegur'o M, who continues to blog at Gukira: Without Predicates, is a stellar example of the good that can come from a blogger at the top of their game.

But that public aspect is one that I cherish, and one reason I hope to continue blogging. I also wish some of my old blogging friends, many listed on the blogroll to the right, and other bloggers I never interacted with but who've given up blogging, would start up again. No shade against Medium, but before ideas are fully polished, why not bounce them off readers on a blog? You can always--well, so far--revise as you go.
Posted by John K at 2:59 PM No comments:

It has been a while since I posted anything beyond holiday greetings; the end of last year was particularly busy and the new one is turning out to be even more so. Nevertheless, here are some photos from the end of 2018, and, I hope, a sign of more new posts to come. 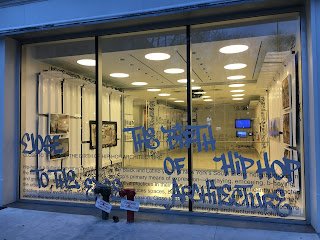