A lifetime--or decade and a half, to be exact--ago I completed a book of poetry entitled Heroic Figures. It was a finalist for an Academy of American Poets Prize, and later, a finalist for the Cave Canem Prize. My experiences with publishers, however, unfolded in the same way: interest, sometimes quite genuine, only for nothing to happen or the book to be rejected. I even thought about self-publishing it, but ended up working on Seismosis, the collaborative project with artist and poet Christopher Stackhouse, as well as a novel (still in progress) and Counternarratives, and so the poetry manuscript, I thought, would be consigned to the archives. 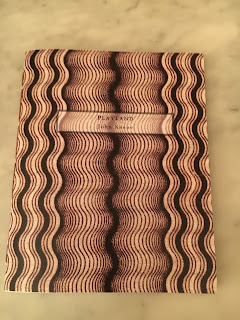 Earlier this summer, however, Ron Mohring of Seven Kitchens Press wrote to ask if I still was interested in publishing a distilled version of the earlier collection that I submitted a few years ago to one of their contests. (It did not win, of course.) I looked back over the manuscript, and realized that I could add a few newer poems and have a little collection that looked back to my writing in the 1990s, a good of which dealt with my youth in the late 1980s and early 1990s, during the worst days of the HIV/AIDS and linked them to more recent concerns. The result, which I sent to Ron and which passed his muster, is Playland, a chapbook of 20 or so poems now available, in very limited quantities, from Seven Kitchens Press. Many thanks to Ron for making this publication possible!

The poems include one of the first I wrote as an adult writer, "Mission and Outpost," a response to a visit in 1990 or 1991 to San Francisco, where I hung out with the cousin of one my former bosses and mentors, listened to his stories of pre-AIDS San Francisco, and mused about how I might have responded to the liberatory promise that seemed to beckon to those heading there in the first decade after Stonewall. A much more recent one, "Suit," emerged as I considered my friendship with the late performer and dancer Phil Horvitz, who was the boyfriend of artist Nayland Blake. Phil and I worked at National Video Resources in the late 1990s, and whose career as an artist I only fully learned about after we'd both moved on to different jobs. The title poem is one I wrote while a Cave Canem Fellow, and the collection owes a huge debt to my three years at their invaluable workshops. I should admit that I initially worried that the poems might read as out of fashion compared both to my newer writing and to the brilliant poetry my contemporaries and younger poets are writing today, but I'm happy to say I think all of it holds up pretty well, since the emotional content crosses temporal and chronological barriers. (Now if I can only figure out to publish the revised volume of poems and a new one!)

You can order a copy here. There are only two dozen for sale, so if you're interested, please get yours today!

Here are a few, from recent weeks (and the first three are from much earlier in the summer), including  one showing the new business that occupies what had been my former workout spot, Steel Gym. It was right across from here that domestic terrorist Ahmad Rahami set off one of his bombs, which blew a Dumpster straight across 23rd Street. The mangled remains landed right in front of the new Scottrade office!

Remember, if you click on them you can see them at full size!

Until Sunday, I had never attended the Brooklyn Book Festival.  More than once, though, despite the required trek, I had thought about attending, but I never managed to do so. And then, through the graces of Park Slope Community Bookstore in Brooklyn, I was invited to participate in a reading and conversation, titled "Inventing History in New Fiction," with authors Susan Daitch (The Lost Civilization of Sollucidir) and Jeremy Davies (The Knack of Doing), and New York Magazine critic Christian Lorentzen, at St. Francis College in Brooklyn Heights.

Before we took the stage, I had an opportunity to chat with Sarah Schulman (who shared a copy of her acclaimed new book, Conflict Is Not Abuse: Overstating Harm, Community Responsibility, and the Duty of Repair, Arsenal Pulp Press, 2016, with me) and also see Jaci Jones LaMon, among others.  I won't recap the event, which went very well, beyond saying that we had a good crowd for 10 am; that it was great to to meet and hear Daitch, whose work I'd been reading since the late 1990s when she published Storytown, learn about and hear Davies's work as well, and to be in conversation with Lorentzen, a superb critic. Our hour raced by, and then we signed books and I bought a number myself.

Many thanks to friends and fellow writers who headed over to hear us, buy books (we sold quite a few), and ask excellent questions!

After leaving the Brooklyn Book Festival I head north to Queens, where the final day of the annual NY Art Book Fair, mounted by Printed Matter at MoMA PS1 was underway. I had attended the NYABF a number of times, though I'd missed it last year. This time I had more incentive, since ITI Press was there with copies of GRIND, as was New Directions. The trip on the G was pleasant enough, but the day had begun to warm considerably time I got to Court Square, so I found myself crinkling a bit in the kiln of the exhibition rooms, which were packed with artists, authors, and people taking in the dizzying array of options. (I can only imagine how hot it must have been on Saturday, when a supposed 15,000  people passed through MoMA PS1's doors.


At the New Directions table, which was on the first floor, I picked up copies of the new double-novella volume by Laszlo Krasznahorkai, and the distilled Emily Dickinson envelope poem collection, among other goodies, while at the ITI Press table I signed books and chatted with founders and artist-authors Catherine Taylor and my co-author Nicholas Muellner, as well their as their cool interna (whose name escapes me) and a number of people who passed by. Afterwards I wandered around and though I'd vowed not to pick up so many books, I ended up with several bags worth, as well as very affordable prints, drawings, and photostats.


I even grabbed a book and signed poster by the artist Dread Scott, whom I'd last seen performing his fire hose piece beneath the Brooklyn Bridge a few years ago, and a massive volume, on discount--which were legion on Sunday, something I have to remember--of Robert Ashley's graphic scores and several of his operas, which I'd love to see performed live. (I missed one that was staged just not long ago in...Brooklyn!) Here are a few photos from the event. Next year if it's as hot a day I hope they at least consider a few more strategically placed fans. 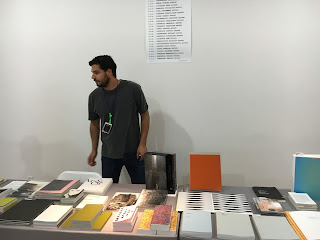 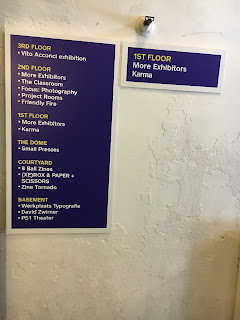 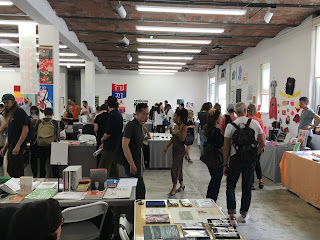 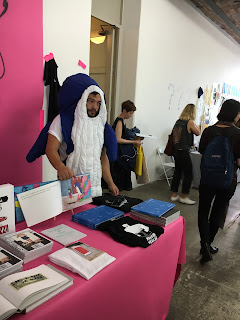 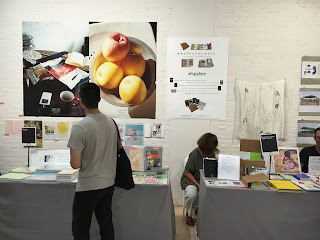 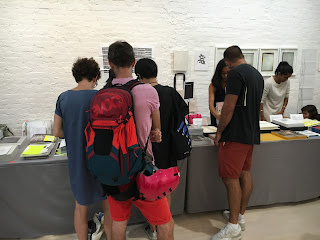 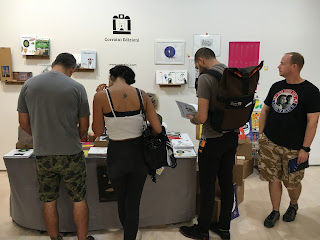 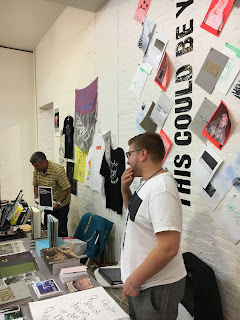 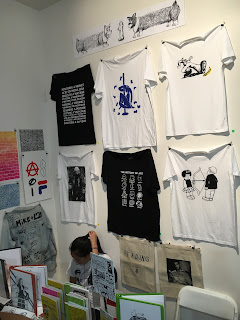 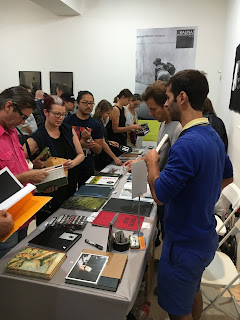 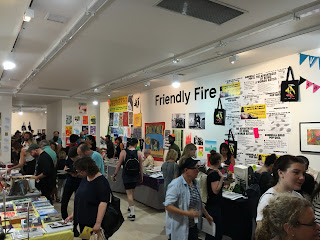 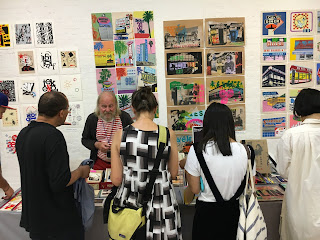 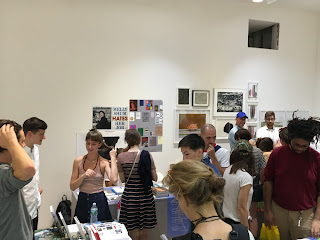 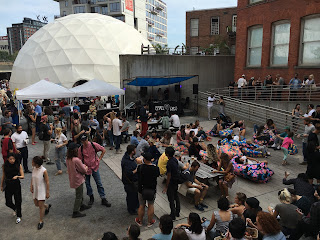 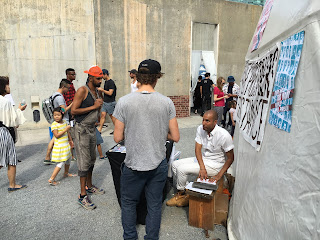 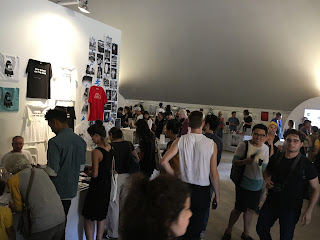 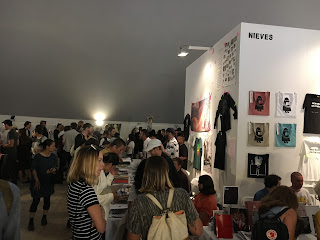 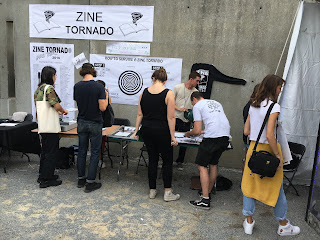