If this summer you 1) happen through New York City, 2) are anywhere near the East Village or West Village, and 3) seek a book, particularly a work of distinctive poetry, fiction, creative nonfiction, philosophy, literary or cultural theory, or magazines, zines, art books, and so on, please consider dropping by and shopping at St. Mark's Bookshop, on Third Avenue near E. 9th St., one of the best independent bookstores in the city, and one of the survivors in what was once a city brimming with indie booksellers.  Though old standbyes like Shakespeare & Co. still exist and newer bookstores like McNally-Jackson and Idlewild Books offer great selections, St. Mark's storehouse of zines, obscure critical books, and poetry titles, to name but three of their strengths, remains among the best New York has to offer, at least in my experience. It was at St. Mark's that I first came across Will Alexander's work, after months of buzz from friends about it; where I found maga/zines like Butt before any other non-Christopher St.-area bookstores were carrying them; where I used to grab my copies of Linda Simpson's My Comrade, Sister whenever I visited the City from Boston; and where my own first book initially appeared--before it showed up in any other bookstores.  The staff, though perhaps a bit saturnine as a whole, has tended in my experience to be far more knowledgeable than that of many other bookstores I've come across over the last 10 years.

In previous blogposts I've written about the 2007 closure of stores like the extraordinary Gotham Book Mart, and, I'm sad to say, St. Mark's appears to be teetering on the brink. The overall grim economic situation, the rise of online and e-book sales, problems with publishers, and New York City's exorbitant rental market are proving lethal, so St. Mark's needs every sale it can get. According to Gothamist, last October the bookstore had to lay off all of its part-time staff and reduce the hours of its full-timers, but anemic sales and an unyielding landlord have meant that the store continues to struggle financially. Mark Russo, one of the bookstore's managers, is quoted in Aidan Gardiner's June 23, 2011 article in The Villager stating the case as: "We were in a precarious position and when you add what happened with the economy in general — there you go...We’re particularly vulnerable to that because of the price of our real estate. It’s people turning to e-readers and that sort of thing."

Russo doesn't foresee closing St. Mark's Bookshop anytime soon, but the store is currently on an IV drip at best. One problem, which I admit I've exacerbated in recent years, is that nowadays customers will not buy a book if it's not in stock; waiting even 24 hours for an order to arrive, thus necessitating a return to the store to pick the book up, has become too long a wait in the era of overnight shipping of books directly to your doorstep.  Quoting Russo, "'E-book sellers have changed what people’s perception of service is and what is legitimate to expect in a short period of time....If you say to them that you’ll have to order it, a lot of people have a strange idea of what ‘right away’ means.'" Gardiner's article adds, however, that despite the panoply of challenges, New York booksellers have not suffered as badly as their peers in other cities and regions; a report by the American Booksellers Association in conjunction with Civic Economics says that New York is the "twelfth-best independent-bookstore business market" out of 363 in the US (I'm surprised it's not in the top 10). That said, the article also states that New York-area independent booksellers have noticed a "dip" in their business, though nothing as severe as St. Mark's.

The fate of the independents, once threatened by the megachains but now by online selling and e-books, once again looks bleak, so it's up to readers to do our part. If you're in or around St. Mark's or any other bookstore, especially an independent, please buy a book or several if you can afford to! 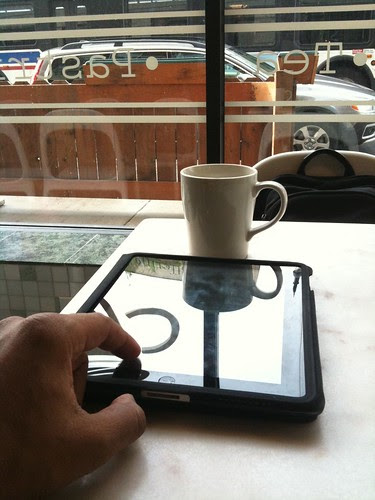 Not all that glimmers from an e-book screen is worth reading, or even a book as we know it. I am a fan of electronic books--though I keep buying and reading codex ones, and just finished Jennifer Egan's superb, Pulitzer Prize-winning A Visit from the Goon Squad (Anchor, 2010--which I bought it at The Strand, an independent bookstore!), but C, an e-book publisher now, forwarded me several cautionary articles about e-books, Amazon and its popular Kindle reader that I recommend. For example, I had no idea that Kindle-targeted "spam" e-books were "clogging" Amazon's store. But, says the LA Times, they are:

Thousands of digital books, called e-books, are being published through Amazon's self-publishing system each month. Many are not written in the traditional sense.

Instead, they are built using something known as Private Label Rights, or PLR content, which is information that can be bought very cheaply online then reformatted into a digital book.

These e-books are listed for sale — often at 99 cents — alongside more traditional books on Amazon's website, forcing readers to plow through many more titles to find what they want. Aspiring spammers can even buy a DVD box set called Autopilot Kindle Cash that claims to teach people how to publish 10 to 20 new Kindle books a day without writing a word.

Most PLR texts seem to be the product of content farms, quickly-written, work-for-hire informational material cranked out by underpaid writers with little more than a passing knowledge of their subjects. It's the same sort of stuff you'll find on ehow.com. The content packages are filled out with public domain material, usually available elsewhere for free, such as old junior league-style cookbooks ("Cat Head Biscuits And Garlic Fried Chicken") and self-help manuals ("Nice Guys, Shy Guys & Good Guys"). Some e-book spammers publish reformatted classic literature that's gone out of copyright, passing themselves off as the "editor."

One of the first to observe this phenomenon is British marketer Mike Essex, who found, in the Kindle store, nearly 3,000 99-cent e-books "created" by one Manuel Ortiz Braschi. Braschi is purportedly the author of "Canvas Painting 101," "40 Ways to Prevent or Get Rid of Stretch Marks," and "Seven Days to Profitable Blogging," among many, many others. When he's not providing this invaluable guidance to the public, Mr. Braschi somehow finds the time to offer his editorial assistance to such authors as D.H. Lawrence, Leo Tolstoy and Georgette Heyer. (Though how he reconciles publishing both "St. Michael The Archangel -- The Prince Of Angels!" and "Lady Chatterly's Lover" is an interesting question.) Since Braschi's oeuvre first came to Essex's attention in March, this authorial dynamo has added nearly 1000 new titles to his oeuvre.

Braschi's customers are, for the most part, unimpressed. "The book isn't formatted for the Kindle and states specifically that it has been downloaded from a public domain," complained one typical review. "It lists a website for free software that doesn't exist ... It's atrocious."

Beware anything published by Mr. Braschi!  Then, as the LA Times article notes, there are other interlinked problems: plagiarism and theft:


Some of these books appear to be outright copies of other work. Earlier this year, Shayne Parkinson, a New Zealander who writes historical novels, discovered her debut "Sentence of Marriage" was on sale on Amazon under another author's name.

For Amazon, the wave of e-book spam hitting the Kindle could undermine its push into self-publishing and tarnish the Kindle brand, which is set to account for some 10% of the company's 2012 revenue, according to Barclays Capital estimates.

The article points out that these the spamming and plagiary combine in some cases in which a program can rename a top-selling e-book in order to market it to a different demographic. It also states that while the Kindle, with the largest market share among e-readers, has been a target, Barnes & Noble's increasingly popular Nook has not, and makes no mention of the iPad, perhaps because although you can acquire a Kindle reader app for Apple's product, selling anything through its iTunes store, as C has attested, requires running an obstacle course of sorts.  It is anything but simple, straightforward or self-evident.

Finally, author Rahma Krambo, in posting about the issues above, links to possible solutions, including empowering readers to flag spam texts on Amazon, thus filtering out at least some of the bad results (though how can you tell before viewing them which editions of John Milton's Paradise Lost, say, which is a public-domain text, are legitimate republications by scrupulous small publishers and which are spam texts?), but he also suggests a social-networking solution that would involve recommendations by friends. Another idea is for Amazon to charge to upload texts, which would deter at least some of the greediest spammers, especially those churning out crap at no financial or social cost whatsoever to themselves; perhaps some combination of these first and last options might work best. (I say keep Facebook, etc. out of it.) Krambo ends by offering links to a great tool, Plagiarisma.Net, which you may find very useful.  Let me just say that I have utilized this with student papers, thankfully with no upsetting results, and have put some of my own published work through it, again, with no negative results (Amazon's and Google Books' entries were what popped up).

That said, I have found someone appropriating--stealing--content from this blog, down to the photos at times. (And not just from J's Theater.) Who? TITDILAPA.  I'm still not sure how to get Blogger to do anything about this; flagging the spam site doesn't seem to work, and Blogger's (Google's!) language about lawsuits is terrifying. Terrifying, that is, to the one requesting that such sites be taken down. So the other blog, like the spam e-books, remains online....
Posted by John K at 11:28 PM