Just a quick note to congratulate poets Rigoberto González and Joan Larkin on jointly receiving this year's Shelley Memorial Award from the Poetry Society of America! I know Rigoberto personally and am especially delighted that he has received this incredible honor, whose prior recipients include Ed Roberson, Yusef Komunyakaa, Angela Jackson, Kenneth Koch, Adrienne Rich, John Ashbery, Gwendolyn Brooks, and many other great poets. Today marks the 150th anniversary of the Confederate assault on Ft. Sumter, South Carolina, which was the opening salvo of the US Civil War (1861-1865), the largest and most destructive war on American soil in our nation's history. At the end of the war, over 600,000 soldiers and civilians were killed and a great deal of the South was physically devastated, but by the horrific institution of slavery, as it had come to be in the US, had ended, and soon, two new Constitutional amendments, the 13th and 14th, would initiate the process begun in parts of the country half a decade before, to ensure equality to all Americans. The country too, though sundered in deep ways we are still reckoning with, was stitched together like the halves of an immense and thick, multicolored quilt that had been torn apart, and it too continues to be expanded and recreated. 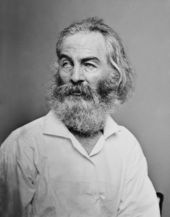 Poets wrote about the war during its unfolding and afterwards; in fact, people still continue to write poetry--and novels, historical studies, comic books, etc.--about the US Civil War, not least because of its fundamental role in the new society, the new country, the new America, that it brought into being.  Today's selections are two poems written by figures who lived through the antebellum and Civil War era, two writers without whom the fields of African American and American literature, respectively, could have developed. They are Frances E. W. Harper (1825-1911) and Walt Whitman (1819-1892). Both are well enough known (Whitman certainly, but Harper too, as her works are now central to most explorations of 19th century African American literature and culture, Black/women's writing, feminist studies, and so on.) Harper published her first book, Poems on Miscellaneous Subjects (echoing her and our ancestor Phillis Wheatley's 1773 volume Poems on Various Subjects, Religious and Moral) in 1854, while the first version of Whitman's Leaves of Grass, one of the greatest collections of poetry in American or any literature, appeared in 1855. Each poem speaks for itself, so I'll just say: enjoy.

AN APPEAL TO MY COUNTRYWOMEN

BEAT! beat! drums!—Blow! bugles! blow!
Through the windows—through doors—burst like a ruthless force,
Into the solemn church, and scatter the congregation;
Into the school where the scholar is studying;
Leave not the bridegroom quiet—no happiness must he have now with his bride;
Nor the peaceful farmer any peace, plowing his field or gathering his grain;
So fierce you whirr and pound, you drums—so shrill you bugles blow.

Beat! beat! drums!—Blow! bugles! blow!
Over the traffic of cities—over the rumble of wheels in the streets:
Are beds prepared for sleepers at night in the houses? No sleepers must sleep in those beds;
No bargainers’ bargains by day—no brokers or speculators—Would they continue?
Would the talkers be talking? would the singer attempt to sing?
Would the lawyer rise in the court to state his case before the judge?
Then rattle quicker, heavier drums—you bugles wilder blow.

Beat! beat! drums!—Blow! bugles! blow!
Make no parley—stop for no expostulation;
Mind not the timid—mind not the weeper or prayer;
Mind not the old man beseeching the young man;
Let not the child’s voice be heard, nor the mother’s entreaties;
Make even the trestles to shake the dead, where they lie awaiting the hearses,
So strong you thump, O terrible drums—so loud you bugles blow.