Li-Young Lee (1957-) is one of those poets who entered my consciousness like a meteor when I was younger; in fact, it was his book The City in Which I Love You (Boa Editions Ltd., 1990), that rocked me so profoundly. I read those poems like a sacred text over and over, and I cannot say that they had any direct influence, though I do quote him in my first book. The lyrical exploration of his family and past, the way he wrote about his Chinese-American ancestry and his experiences, his capacity for abstracting his life and yet emotionally grounding it were all key in ways I have not yet fully acknowledged. I went to hear him read several times during that period, and responded like a fanboy, but I must admit I haven't read his work much in recent years, and I'm told he lives in Chicago, though I have never heard him read t/here in the 8 years I've lived in the city. 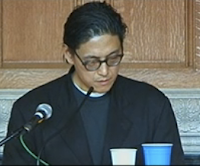 Today I came across the poem below by Lee in the New York Times, which seldom prints poetry nowadays, except on special occasions, like holidays or the beginning and ending of seasons. (They very well may feature poems commemorating the upcoming British royal nuptials, given their class fixations....) The special occasion for today's Times poetry feature was Spring, the current season now darting about coquettishly, and so, in the "Opinion" pages--not the "Arts" pages, tellingly--they published four poems on the theme of Spring, by Lee, Ellen Bryant Voight, Kiki Petrosino, and Billy Collins. Not much aesthetic diversity there, and just one poet of color, but the bigger issue is why the Times doesn't regularly publish poetry; it should, for multiple reasons, not least because, as one of my favorite poets, William Carlos Williams (1883-1963) once wrote, in his late, long and revelatory poem, "Asphodel, That Greeny Flower":


Well, yes indeed, and soon I will post an entry on the (mis-)use of metaphor and metonymy, so central to poetry and fiction, and its effects on our ways of thinking. As for the Times, one might say, what should I expect. Yes, I know, but.... I nevertheless recommend reading all the poems, and snipping the section, which is a .jpg file, for your files.  Here is Li-Young Lee's poetic contribution, "The Word From His Song," which, rather than retyping, I digitally snipped from the paper. "The voice is a sighted brink"--okay, maybe his poetry has sunk more deeply into my imaginary than I thought.... Enjoy!