Since I've between splitting my tweeting @harriet_poetry, I thought it might be a good option to introduce a different form every day (evening, really) to provide a prompt for folks. Among the forms or genres I've suggested so far are senryus, sestinas, ekphrastic poems (I provided a very simple painting I came across on Morse St. in Chicago) and today's, the mesostic. People have written and blogged or sent me original poems, which is both amazing and heartening--and they've been strong pieces to have been written so fast. The first night, though, I suggested a "nocturne," since the prompting came fairly late in the evening, and people replied with opening lines. That got me thinking about poets who write nocturnes, and about a US poet who's little remembered today but was an early pioneer in a number of ways, no least among them as one of the first major Asian American poets: Sadakichi Hartmann (1867-1944, photo Modern American Poetry Site). A native of Japan with mixed Japanese-German descent, Hartmann grew up in Germany, and moved to the US in the 1890s.  A critic, actor, friend and participant in the Modernist movement, heavily influenced by symbolism, he was also one of the first pioneers of the English-language haiku.  Below is his "Nocturne," from his original 160-issue typed 1904 manuscript, which I copied from Google Books using their "Clip" function. It's not amazing that the text is online (Google!), but it is amazing that with their tool I could save it, send, embed it, or, as you see, repost it here. 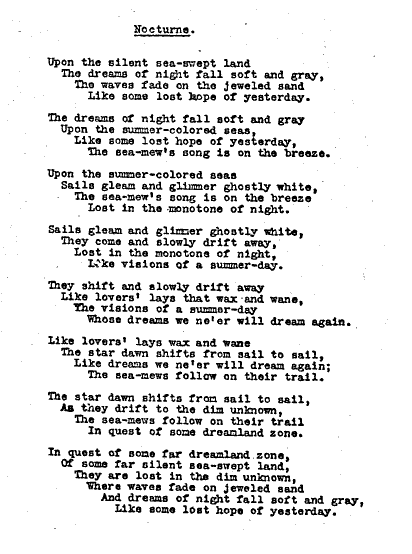