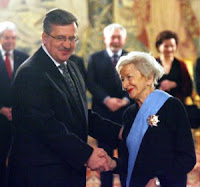 When Wislawa Szymborska (1923-) received the 1996 Nobel Prize in Literature, I recall saying: "Who?"  My knowledge of 20th century Polish poetry was five writers deep: Czeslaw Milosz (1911-2004), Adam Zagajewski (1945-), Zbigniew Herbert (1924-1998), Witold Gombrowicz (1904-1969), and Jerzy Andrzejewski (1909-1983). Milosz I knew of because he won the Nobel Prize in 1980, and I began seeing his work here and there, then started reading it, with astonishment, when I got to college. Zagajewski because when I was in college, one of his major translators, the poet and critic Stanislaw Baranczak, was on the faculty, and perhaps as a result, Z's poetry seemed to appear everywhere. Herbert I learned about from one of my fellow Dark Room members--they abounded in information like that. Gombrowicz was a name I'd seen for years, always in relation to his highly praised--but unread by anyone I knew--novels Ferdydurke (1937) and Pornografia (1966). I would lying if I said I had gotten more than 25 pages into either. Andrzejewski--I don't even know, though he was allegedly on the Nobel shortlist as well, like Zagajewski probably is. Not a single woman, no Szymborska, among them.

Then Szymborska came to world attention, and I started to see her wry, wittily ironic, deeply human and humane, often melancholy, sometimes heart-piercing poems in translation.  She has, at least to my ear and mind, a gift for boring utterly into the core of the moment the poem invokes, with wit and an undertone of sadness, sometimes so plangent, as is the case with the second of the poems I'm posting below, that it's almost painful.  A few years ago, 2006 I think it was, the writer Thomas Glave came to the university, and as part of his preparation for speaking to my "Situation of Writing" class, he asked that I have them read several poems that broached the writer's ethical responsibilities and challenges by Szymborska. I had not read these myself, so they were a revelation (I should have expected no less from Thomas, who is himself a revelation).

I say all of this as a set-up for me to post two poems by Szymborska, who remains one of the great living poets. The first I came across on the Nobel Prize site, and the second I read first in The New Yorker, and as soon as I read and reread it about 10 times, I tore it out and put in my "poetry" file.  Once upon a time, in my pre-professor days, that little file was a "sanity" file, and I would paste the poems up on the glass walls of my office, and whenever I'd hit of rough patch of bureaucratic nonsense, or my then-boss would, well, perform as the entire staff dreaded, I'd look at those poems and be transported to another place. And I'd write (a bad) one myself. Back to Szymborska: We're lucky to have her around, and if you like these poems, I urge you to go read more.

When I pronounce the word Future,
the first syllable already belongs to the past.

When I pronounce the word Silence,
I destroy it.

When I pronounce the word Nothing,
I make something no non-being can hold.


I AM TOO CLOSE

I am too close for him to dream of me.
I don't flutter over him, don't flee him
beneath the roots of trees. I am too close.
The caught fish doesn't sing with my voice.
The ring doesn't roll from my finger.
I am too close. The great house is on fire
without me calling for help. Too close
for one of my hairs to turn into the rope
of the alarm bell. Too close to enter
as the guest before whom walls retreat.
I'll never die again so lightly,
so far beyond my body, so unknowingly
as I did once in his dream. I am too close,
too close, I hear the word hiss
and see its glistening scales as I lie motionless
in his embrace. He's sleeping,
more accessible at this moment to an usherette
he saw once in a traveling circus with one lion,
than to me, who lies at his side.
A valley now grows within him for her,
rusty-leaved, with a snowcapped mountain at one end
rising in the azure air. I am too close
to fall from that sky like a gift from heaven.
My cry could only waken him. And what
a poor gift: I, confined to my own form,
when I used to be a birch, a lizard
shedding times and satin skins
in many shimmering hues. And I possessed
the gift of vanishing before astonished eyes,
which is the riches of all. I am too close,
too close for him to dream of me.
I slip my arm from underneath his sleeping head -
it's numb, swarming with imaginary pins.
A host of fallen angels perches on each tip,
waiting to be counted.