For once I acted like I had good sense and didn't take 10 books to read on a four-day trip to the Dominican Republic. I only brought along two: acclaimed author Danzy Senna's new novel, Symptomatic, which I read and finished in a little over a day, and Alexander Kluge's The Devil's Blind Spot: Tales from the New Century, which at 100 stories is a distilled version of the German original that includes, I believe I read somewhere, at over 500. (His New Notebooks 1-17: "The Uncanniness of Time", from the 1970s, has about as many, and some are recycled, such as one of my personal favorites, "From the Age of the Enlightenment." ) I did not buy any books this trip, mainly because I didn't visit even one bookstore, though at the airport's giftshop, which includes a small book section, I saw poetry and fiction anthologies that were very interesting. The last time I was there, I purchased a thorough, readable history of the country, Historia Dominicana (no less), written in Spanish by Dominican historian Jaime de Jesús Dominguez and published by ABC Editorial, a publishing company based in Santo Domingo--and, I should add, it does not stint on, but probingly examines the country's extensive African heritage, from the cover imagery to the text itself (I'll post more on the DR soon).

The Dominican author whose I am usually on the lookout for is the narrativist and critic José Alcántara Almanzar, in part because I was once mistaken for him at the Macondo bookstore in New York City, and because his short fiction and critical texts are excellent. But I didn't do much searching this time through. Me disfrutaba....

Senna's book, as I've noted above, I read in almost one sitting. I found her first, award-winning novel Caucasia rich in characterizations, well plotted and thought out, almost perfectedly keyed in tone and voice, brimming with telling details: an excellent debut. Though the themes of the mixed race person's--in particular the "mulatto"--struggle to situate herself in the social structure and racial passing have been amply treated in American and African-American literature, Senna conversed with her literary predecessors while transcending them with her deeply engaging, contemporary story. My main quibble was the periodic slackness of the prose, but I didn't think it detracted from the book's overall high quality. Tisa B. pointed out to me that Caucasia was a response of sorts to an earlier work, The Deep North, by Senna's mother, the marvelous fiction writer, poet and translator Fanny Howe, and after reading that enchanting and provocative little novel, I completely agreed, and have wondered whether anyone has written about these two works in conjunction. (Does anyone know?)

Symptomatic has neither the grand aspirations nor the depth of characterizations, structural complexity or wealth of recognition that the earlier book had; it essentially treats a similar theme, that of the emotionally, socially and psychologically dislocated mixed race person in America, but uses the genre of the noir thriller, which makes it hard (impossible!) to put down, but ultimately renders it less successful than the earlier work. My main quibbles were with the moments of implausibility and obviousness (there is one very early on that made me say out loud, "Oh, no, please, this is too over the top"), as well as passages of discursive shorthand that exist in so much contemporary writing; Senna has estimable talent, as both her first novel and this one, despite its faults, make clear, and so I wanted her not ever to take the easy path, in terms of descriptions, details, characterizations, anything. (Anytime an author describes someone as "blond" these days, I cringe--and I do so even more when an American writer of color resorts to what is basically now a null term.) Senna's skills are extensive, however, so she manages to endow the novel with elements that a work by a less talented author wouldn't achieve, such as a deftly interwoven symbolism throughout (involving names, mirrors, etc.), many moments of irony and humor, including an identity switch that calls out to be transferred to film, and those telling details that make Senna an author I admire and read carefully. I'm still trying to decide whether or not I'll teach this novel this fall, but it was definitely worthwhile travel reading, especially, given its theme, to the DR.

I'll write more about Kluge soon, but will say here that there is no writer like him in contemporary American literature, nor, for that matter, in almost any literature I know of (though there very well may be others writing elsewhere who are doing similarly unusual things). A noted lawyer, philosopher and social critic, and one of the most important filmmakers and leaders of the New German Cinema, with films such as Yesterday Girl (based on his famous story "Anita G."), The Female Patriot, Occasional Work of a Female Slave, and Artists Under the Bigtop: Perplexed, he has also published short fiction, or rather texts that hover between several different genres in which fiction, history and philosophy are central since the early 1960s, when he issued his first collection, Lebensläufe (Case Histories), which was translated initially by Leila Vennewitz as Attendance List for a Funeral, and then later under the more approximate English title. One of his most notable stylistic traits is his dizzying concision; in the early work, this function at the level of the sentence, which is to say in descriptive passages of pinpoint precision and detail, as well as aphorisms, but in the later stories (Kluge is around 73), the brevity rises to the level of the texts themselves--as overall length, concision of structure, characterization, you name it. Many of the stories in The Devil's Blind Spot (and he actually does write about the Devil, or some version of him, in many of the pieces) are no longer than two-three printed pages, or are broken up, as in the earlier work, into sections which also are as brief as prose poems, though they're written in declarative prose and fragments, and rarely in lyric language. I have about two sections to go, but I can say, anyone who can range from stories about medieval witchcraft to the unrequited souls of African slaves in Brazil to Adorno's girlfriend to the Islamicists' attacks on the American embassy at Islamabad to the thought processes of cilia (yes!) and make nearly all these texts work gets superprops from me.

I also realize as I'm concluding this book that a genius of Kluge's type is sorely needed in our contemporary American sociopolitical discourse, but his is such an acquired taste that it's unlikely he'll be read by more than a handfull of people. But more on him and the stories soon.

C. purchased a new, small camera, so we were snapping photos throughout the trip, and here is one of my favorites, a young brotha changing money in a gallery-money exchange-warehouse-hangout spot right off the main street, el Conde, and the park in front of the Cathedral Basílica of Santo Domingo, the oldest Catholic church in the oldest continously European-settled city in the Americas. To say his arms and hands are dancing as he's enjoying himself (money can do that to you!) wouldn't be an exaggeration. 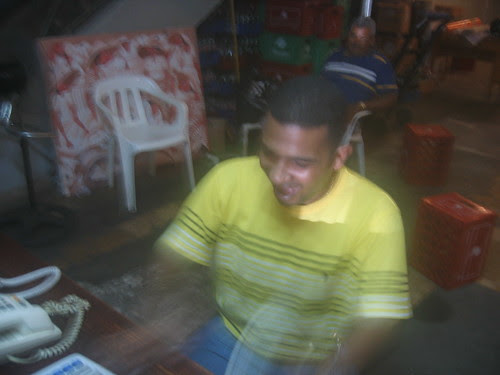