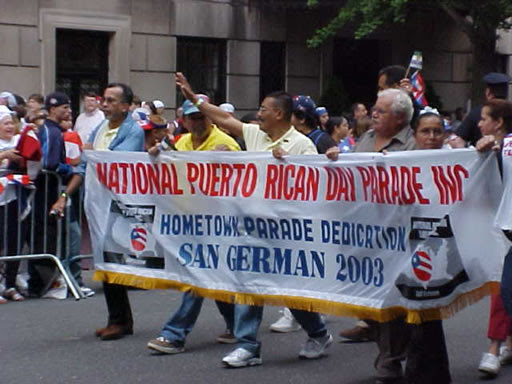 In 1958 the first Puerto Rican Day Parade in New York occurred, just over half-a-center after Puerto Rico became a U.S. colony as a result of the Spanish-American War; in 1995, this celebration of Puerto Rican heritage and pride became the National Puerto Rican Day Parade. Today marked the 10th anniversary of the national celebratory march, which took place along Fifth Avenue from 44th to 86th Streets and ran from 11 am-6 pm (officially). The parade once again drew one of the largest and most festive crowds of any of New York's summer festivals, with marchers and musical performers from all of New York's boroughs, delegations from the island and islets of Puerto Rico, as well as celebrants from across the City, tri-state area, U.S. and world.

Very obvious this year was the audible dominance of reggaeton/reggetón music and its stars (Ivy Queen, Daddy Yankee, Zion y Lennox, Julio Voltio, Baby Rasta, Adassa, Wisin, etc., and the Afrorican lodestar himself, Tego Calderón) over the more traditional Puerto Rican musical forms, salsa and bomba y plena; even the TV commentators (repeatedly) made note of it. They also noted the increased presence of younger participants, both in the parade itself and in the stands, though they offered no suppositions or explanations for why. I won't either. But it does bode well for the future of this event, which despite some recent problems (including attacks on female attendees several years ago), one of the centerpieces of New York's heritage celebrations. En el espíritu del desfile de hoy, let me add: ¡Viva el Borinken, viva la gente y el orgullo boricua!

Hearing reggetón today jogged my memory about another event that began yesterday and runs until this upcoming Sunday: The fifth annual Hip-Hop Theater Festival. Taking place in multiple cities this year (San Francisco for 10 days in May, Washington in July, and Chicago in September), the weeklong series of plays and performances hit New York with a "best-of" previous festivals event and a late-night party at Sutra, on the Lower East Side. Other events include a hiphopera, some interesting-looking solo sets, and two world premieres, including Briton Benji Reid's "13 Mics" (pictured at right, courtesy of Hip-Hop Theater Festival) and German Niels "Storm" Robitzky's "Solo for Two." I'll be away so I'll have to miss most of it, but if any readers check it out, do post a reply or direct me to your comments on it.

This weekend I did see two films at New Fest, Kyle Schickner's feature Strange Fruit, and Nicole Conn's documentary little man, which was co-produced by a friend of my partner C.

Strange Fruit was definitely worth catching, despite being very uneven, with an outlandish ending. What I found refreshing were the attempted depiction of one Black gay man's return to his former home in the Deep South (Louisiana's bayou country), the desire to tweak the viewers' plot expectations, and some of the portrayals, particularly the thoroughly handsome Kent Faulcon as William Boyals, the Black, gay, New York-based attorney who heads back to his native town to investigate the lynching on his friend, Kelvin Ayers, and David Raibon as Duane Ayers, Kelvin's straight, paroled brother (both pictured below). What wasn't refreshing was the recourse to stereotypes and clichés, the gaping plot holes and implausibilities, and the moments of (very) bad acting. For whatever reason, the actors depicting the white police officers were especially off-key, as was the young actor who overemoted as Boyals' ex. The bayou setting itself verged a bit too much on a boiled down In the Heat of the Night. (A close friend's date, a brotha who's a native of southern Georgia, said that he found the setting totally unbelievable.) I personally thought that with a few shifts in the plot to tie up some of the unbelievable elements, better direction to tone down the acting (and nail the Louisiana accents), and the elimination of the schmaltzy non-diegetic music, the film would have been much stronger. Still, it's rare to see the characters and scenarios Strange Fruit depicts on screen (down to the floating, rope-pulled walkway needed to reach the gay bar), so even with its serious faults, I'd recommend it.

Little man follows the vicissitudes of filmmaker Conn (Clair of the Moon, Cynara) and her partner, political activist Gwen Baba, after they contract with a surrogate mother who turns out to have health problems that result in a severely damaged infant. The documentary skillfully and movingly follows Conn, Baba, their daughter, and the baby boy, Nicholas, as he battles for life over a period of several years. More than once he hovers on the threshold of death, as his body's neuroelectrical system cannot regulate itself and his digestive system in particular falters; his struggles and their effects on Conn and Baba provoke each of them to question their initial aims in the surrogacy, interrogate their personal and shared values, and to ask what constitutes a "decent life" for a child experiencing such intense and continuous suffering. I won't give the ending away, but it is an excellent movie, and one ancillary point it broached for me was the issue of access to quality health care, which millions of Americans lack completely, yet which is so essential to Nicholas's survival. The film unfortunately doesn't press the question, but if these two extraordinary women did not have the resources to fund their son's repeated trips to the hospital, his surgeries, his physical therapy, his necessary medical equipment, and so on, what might the outcome have been? All in all, little man is a superb documentary which I hope, like Strange Fruit, makes it to more theaters and TV (Sundance, Logo, etc.) soon.
Posted by John K at 9:00 PM