As a counter to the post on the anti-lynching resolution, I thought I'd mention a more positive historical story, that of Sumner High School in St. Louis, Missouri. This year, Sumner turns 130 years old, making it the oldest public high school for Black students west of the Mississippi River. 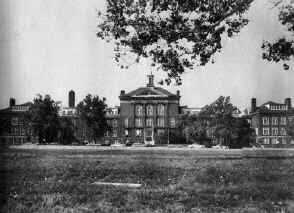 Sumner was founded in 1875 as the "High School for Colored Students" during the Reconstruction era (which Rutherford Hayes would end a year later in his successful ploy for the Presidency), and was named after the then just-deceased Massachusetts abolitionist Senator Charles Sumner, whose personal dedication to the freedom and equality of African-Americans was exemplary. In 1848, he helped to found the Free Soil Party, some of whose adherents later went on to establish the anti-slavery Republican Party. In 1849 he legally challenged the segregation of schools in Boston. In 1856, he was caned to unconsciousness on the floor of the Senate by Southern pro-slavery Congressman Preston Brooks after insulting Brook's uncle in an attack on the slavery partisans in Kansas; because of his injuries, Sumner could not attend to his Senate duties for three years. During the early days of the Civil War, he was one of the first to push for the enlistment of Black soldiers, and strongly supported Union General John C. Frémont, later Senator from California, who unilaterally freed the slaves in Missouri in 1861 without federal authorization. Later he pushed through the Civil Rights bill of 1866 and the Reconstruction Acts of 1867, all of which had a dramatic effect on the participation, at least for a brief moment, of African Americans in American public and civil life. Sumner also led the impeachment proceedings against Southerner Andrew Johnson, and during Ulysses S. Grant's first term fell out with the Union War hero over what Sumner perceived to be his insufficient attention to the cause of Black liberty. Sumner died of a heart attack in 1874.

In sum, then, an appropriate person after whom to name the first public school for Black students. I should also note that ex-slave John Barry Meachum established the first St. Louis school for Black children in 1827, yet was forced to close it shortly thereafter. In 1847 Missouri outright banned the education of Blacks on its soil, fearing that intellectually armed they might revolt, so Meachum ingeniously started a school on a riverboat shortly thereafter. Also, William Greenleaf Eliot, the founder of Washington University in St. Louis and grandfather of the poet T. S. Eliot, co-founded a school to educated free and escaped Blacks at the height of the Civil War, in 1863; two days after it was opened it mysteriously burned down, though it continued at different sites for several years. Finally, Hiram Rhoades Revels, who became the first Black member of the United States Senate in 1870, from the state of Mississippi no less, also established schools for Black children. Revels, who had earlier been a principal of a school for Black children in Baltimore, started his St. Louis school around the start of the Civil War, and it also was located on a boat. I should also add that last fall I actually met Revels's grand-daughter, now an octogenarian; she lives in Chicago and is one of the premier collectors of African-American art in that city.)

I didn't attend Sumner (my own high school alma mater turns 50 years old this fall), but my parents, one of my grandfathers and both of my grandmothers did, one of my godmothers and one of my godfathers, many of my aunts, uncles and cousins did, as did the majority of Black teenagers through the period of integration of St. Louis's schools, which began in the late 1950s and continued well into my own high school years, in the 1980s. St. Louis's public (and private, for that matter) schools were racially segregated, as were most of its facilities and institutions; as the (once) chief city in a former slave state, it applied Jim Crow laws with a vengeance. (Actually, Blacks still were expected to get their food through the back doors of some restaurants as late as the mid-1960s, though "colored" drinking fountains and required back-of-the-bus seating were no longer officially in effect. )

Originally Sumner was located at 11th and Spruce Streets downtown, but after parents protested that the students were required to walk past the gallows and morgue, officials moved the school in the 1880s, and then in 1910, after parents again petitioned the school district, Sumner moved to its final site, 4248 Cottage Avenue, in the historic Ville neighborhood, with the building designed by famous educational architect William B. Ittner.

Sumner remained St. Louis City's only Black public high school until 1927, when Vashon High School was founded. (Vashon was named for George Boyer Vashon (1824-1878), an abolitionist and jurist who was the first Black person to graduate from Oberlin College and later became the first African-American lawyer in New York State in 1847 and the first Black person to run for statewide office in New York in 1855; and his John B. Vashon (1859-1924), a noted Black schoolteacher, lawyer and linguist who taught in the St. Louis Public schools for 34 years.) St. Louis's lone suburban Black high school for many years, (Frederick) Douglass High School, was established in 1892 in Webster Groves (home also to writer Jonathan Franzen), just up a hill from where I grew up.

Among Sumner's most famous alumni are Arthur Ashe, Chuck Berry, Grace Bumbry, Hon. William Clay, Billy Davis, Jr. (of the Fifth Dimension--group members Ron Townson and Lamonte McLemore were also from St. Louis), Dick Gregory (who graduated around the time of my mother and whose brother was her classmate), Robert Guillaume, Elston Howard (Yankee great), Robert McFerrin (the opera singer and father of Bobby "Don't Worry, Be Happy"), and Tina Turner (who was there when my uncle James was in school). (I think I heard that Congresswoman Maxine Waters also attended Sumner, but I'm not sure.)

In addition to a reunion in February and a black-tie fundraiser this upcoming Saturday, a core group of Sumner alumni have envisioned a mentoring program to reach its current faculty and students, whose socioeconomic profiles and educational backgrounds differ considerably from students during the school's mid-20th century heyday, when Sumner drew from all sectors of St. Louis's Black community. The alumni's involvement can help to ensure that despite the changed conditions, Sumner remains a vital institution and continues to play a vital role in the African-American communities of St. Louis and the nation. I hope the effort takes flight, not only at Sumner but at other similar institutions across the country, and to Sumner High School, I wish it 130+ more years of remarkable service!
Posted by John K at 8:53 PM