By now most readers of J's Theater are probably familiar with the Downing Street Memo, which was actually minutes taken during a meeting, between top British officials and those in the White House in July 2002, concerning the then-looming Iraq War. The original memo, which was leaked during Tony Blair's parliamentary campaign, became memos when about six or seven more were subsequently released a few weeks ago. After the appearance of the initial one, blogs like Downing Street Memo, After Downing Street and Big Brass Alliance, and afterwards many of the other, better known liberal bloggers like AmericaBlog, Daily Kos, Atrios, Juan Cole, Doug Ireland, and numerous others, pushed the media for greater coverage of what are extremely significant documents, and the government for answers on when exactly the W administration actually decided to go to war against Saddam Hussein (the memos appear to make clear that it was well before W claimed, corroborating previous allegations by former Treasury Secretary Paul O'Neill and former top national security advisor Richard Clarke) and whether it not it actively lied and dissimulated, with the active connivance of the British government, by exaggerating, misstating or hiding evidence to convince the American people and Congress of the need for war.

The original leaked memo notes that the W administration was "fix[ing]" the "intelligence and facts" "around the policy," which seems like a clear enough indictment to me, though some W supporters and even liberal commentators have claimed alternative connotations. So be it, but actively lying to Congress, which alone has the Constitutional power to declare war, let alone all the other things that occurred to get our troops over there toppling Saddam, sounds like an impeachable offense. Given that Republicans control both houses of Congress, however, it's unlike we'll be seeing a trial anytime soon. (Would ill Supreme Court Chief Justice William Rehnquist, who got his start harassing Black voters in Arizona, be as jolly and dapper as he was when sitting in judgment of Bill Clinton?) The release of the original memo may have had some effect in Tony Blairs loss of 100 seats in the British House of Commons (were the Conservative Party more than a bad right-wing joke, and the Liberal Party not a pallid version of the old Labour Party, Blair might actually have been knocked off his perch), and yet most of the mainstream US press refused to cover it for almost five weeks. Some top editors of major newspapers, like the Los Angeles Times's formerly "liberal" Michael Kinsley, even pooh-poohed what is obviously a very serious issue altogether.

The easily cowed and timorous Democrats, however, have not been completely silent since the electoral debacle last November; Congressman John Conyers (D-MI) has led a charge by Democratic House members to demand accountability from the W administration. On Conyers' site, you can sign the letter he prepared, which is the same one more than 80 other members of Congress sent W on May 5, 2005. It asks the White House some hard questions about the Memo and its implications, and the more citizen signatories it gets, the better. I should add that the Blueblooded Weathervane himself, John Kerry, finally has prepared his own letter (he claimed several weeks ago that as soon as he returned to Congress he was going to broach this issue, but it took the senior Senator from Massachusetts, Teddy Kennedy, to deliver remarks on the floor of the Senate first), which was leaked to Raw Story today. A number of key Democratic senators, including Barbara Boxer, John Corzine (soon to be Governor of New Jersey), Frank Lautenberg, Dick Durbin, and Tim Johnson have signed on to it.

If you can, sign John Conyers' letter, and think about this: if Democrats were to regain the House and Senate in 2006, Conyers, as the ranking member would become head of the House Judiciary Committee and Henry Waxman (D-CA) would head the Government Reform Committee, while hard-hitter Pat Leahy would head the Senate Judiciary Committee. Impeachment would not be out of the question.... Voting machine shenanigans notwithstanding, do what you can to make this happen! 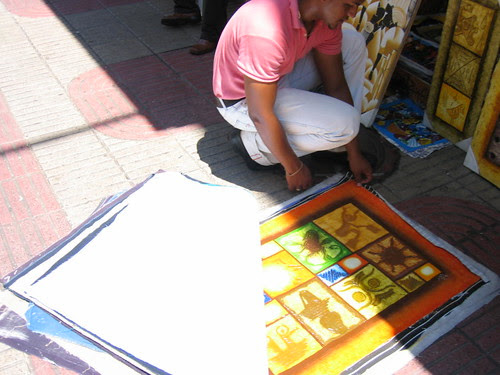 An artist flipping through his paintings on el Conde, the main street in Santo Domingo's historic Zona Colonial.
Posted by John K at 2:39 PM