Yet another DR photo. Though I'm almost cold-free, I didn't feel up to much today, so I missed New York's Gay Pride March, and haven't been able to produce any longish entries here.

Instead, I'm posting another photo from the trip, taken in the Gazcue neighborhood of Santo Domingo, west of the Colonial Zone. Most (all?) of the major Dominican political parties have headquarters there; the last time we were down there and walked through Gazcue, we happened upon the HQs of the ruling PLD party (its head, Dr. Leonel Fernández Reyna, is the current President of DR and previously served from 1996-2000), and the PRD, or Dominican Revolutionary Party, which was headed for years by the intellectual Juan Bosch (who was deposed in a coup in the early 1960s, which led to US occupation and the 12-year rule in the late 1960s and early 1970s of the arch-racist Joaquin Balaguer, who later led the Reformista Party in his subsequent decade long rule from 1984-1994).

One of the major leaders in recent PRD history was José Francisco Peña Gómez (1937-1998, pictured at right) a Dominican of Haitian ancestry and the beloved former mayor of Santo Domingo, who three times ran for and lost the Presidency, though he nearly won in 1996, despite vicious anti-Haitian and racist attacks orchestrated by Balaguer (who even wrote a book demonizing Black people). (I should note that Peña Gómez, after whom Santo Domingo's international airport is now named, also was alleged by various sources, such as Philadelphia's City Paper, 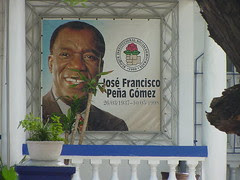 to have bankrolled his run for the presidency by courting drug traffickers). Balaguer managed to foil Peña Gómez's electoral success by forming a coalition with Fernández Reyna, who then defeated Peña Gómez and the PRD (its HQs I photoed last winter, at left) in the runoff, presiding over four years of economic success and financial scandal ($100 million simply disappeared from the government coffers).

Of course, this scandal hardly compares to the raft of scandals which characterized the most recent government, led by PRD-member Hippólito Mejia, including a bank failure that was underwritten by $2.2 billion in Dominican Treasury funds, seriously crippling an already weak economy...but that's a story for another day.

The photo below, taken in Gazcue, shows a billboard of two important figures for the Dominican left, and I believe sits on the grounds of HQ of the Fuerza de la Revolución (FR), a far-left party that united the Communists and several other key radical and independent political groups and organizations. Pictured are Che Guevara (on the left), the enduring icon of a certain era of Latin American transnational Socialism and a hero of the Cuban Revolution, and Francisco Caamaño Deñó (on the right) a colonel in the Dominican Army who was a key representative of the anti-Trujillo and later anti-US invasionary forces and briefly held the presidency in 1965.

Caamaño was a leading figure among the April 1965 revolutionists who overthrew the military-backed Triumvirate that had deposed the democratically elected leftist (PRD) leader Juan Bosch. Caamaño's associates, who came to be known as Constitutionalistas and who drew considerable popular supported, wanted ultimately to reinstall the deposed Bosch to the presidency and to reinstitute the Constitution of 1963, while the Triumvirate aimed eventually to place Dr. Joaquin Balaguer, a wily politician and confidant of the assassinated dictator Rafael L. Trujillo Molina (perhaps best known for his ordering the slaughter of 30,000+ Haitians and dark-skinned Dominicans in 1937; his brutal dictatorship and fascist leanings; his persecution of unionists and Roman Catholic clergy; and his role in helping to destabilize leftist governments across Latin America) in the presidency.

Caamaño ran the country from what was known as the Constitutional Sector, headquartered in a building on el Conde (the main thoroughfare of the Colonial Zone), and, not long after being sworn to the office, renounced it in favor of the former president of the Chamber of Deputies, José Rafael Molina Ureña. Shortly after the Constitutionalistas' removal of the Triumvirate from office and their successful attempt at blocking the military forces from crossing the Ozama River and entering the Colonial Zone area of Santo Domingo, the United States sent an contingent of marines and for the second time occupied the Dominican Republic. Despite international protests, the US manipulated the Organization of American States into backing its action, got several other Latin American nations (including Brazil, which was then under a dictatorship) to send forces, and helped to establish a parallel government that, unsurprisingly, facilitated the election of Balaguer; though Caamaño was sent to London as an envoy in 1966, by the following year he was in exile in Cuba, which had opposed the Trujillo dictatorship and openly protested the American occupation.

According to the Dominican authorities, Caamaño died leading a guerilla group in 1973. According to Ernesto Sagas's and Orlando Inoa's The Dominican People: A Documentary History, Caamaño, an enduring hero of Dominican independence and one of its great leftist visionaries, was slain along with his small, unsuccessful expeditionary force by the much larger and more powerful military forces, then under Balaguer's command, to which he'd once belonged. 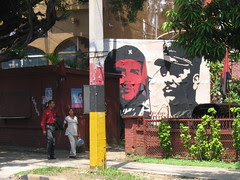