Let's say you're like millions of people out there and you are disgusted by the actions--in Iraq, on the economy, the environment, the judiciary, on the leaking of a covert CIA operative's name, etc.--of the current administration and you want to increase your level of non-violent political resistance.

Well, here's one option linked via Raw Story: Winter Patriot's Whispering Campaign, a Web clearinghouse which provides you with thoughtful, page-long essays and articles you can print and leave anywhere--in laundromats, on buses, in libraries--for people to find them. In the words of journalist and blogizen Chris Floyd:

Winter Patriot has launched a brilliant new DIY activist effort: The Whispering Campaign. It's very simple. WP has set up a website with a selection of short, succinct, printer-friendly articles detailing some nugget of unexplored or underplayed truth about our times; all you have to do is print them out -- and leave them in some public place for passers-by to find and read. As WP puts it: "Ideal locations include book stores, copy shops, libraries, train stations, buses, taxis, laundromats, grocery stores, hair salons, barber shops, rest rooms, gas stations, coffee shops, truck stops... use your imagination!"

It's real grass-roots stuff -- in fact, it reaches all the way down to the individual blade, a personal form of activism either to supplement collective action or to let each person carve a particular path. It's also a good way of reaching people outside the seething blogosphere or the media/political world in general -- the vast majority of the population, in other words.

Now you won't have to write the pieces yourself if you don't have time, nor need you rely mainly on earnest radical people like the Harlem Leafletter, pictured below. 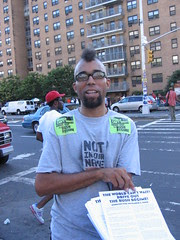 Just remember: don't leave anything larger than the sheet of paper, like a package; be careful not to be advocating violence of any sort (especially against public figures); and make sure you're not violating any littering or other public statutes, or you could find yourself in some (serious) legal trouble in our increasingly hyperpoliced country.

Just this past weekend, Khalid Jarrar, the Iraq native whose English-language blog, Tell Me a Secret, offered a Baghdad-based perspective on the ongoing war and US occupation, made his way back to Amman after having been jailed by the Iraqi Secret Police (Mukhabarat). TalkLeft provides links and details, among them that his brother, Raed, who has his own blog Raed in the Middle, along with an international chorus of bloggers and activists, appealed to the Iraqi government authorities, both there and in Washington, for his release.

He hasn't posted yet about his most recent experiences, but past posts on his blog, like his brother's and those they link to, provide an on-the-ground view of the horrible situation over in Iraq that the media reports about the slaughter and the neo-cons' endlessly rosy perspectives both miss.

As the situation in Haiti, another nation in which our government saw fit to meddle, continues to worsen, the newest issue of The Nation includes an interview journalist Naomi Klein conducted with its its last democratically elected and undemocratically deposed and exiled president, Jean-Bertrand Aristide.

"Aristide in Exile" doesn't portray the former Haitian president through a gauzy screen; as Klein notes in her introduction

Aristide is certainly no saint. But even if the worst of the allegations are true, they pale next to the rap sheets of the convicted killers, drug smugglers and arms traders who ousted Aristide and continue to enjoy free rein, with full support from the Bush Administration and the UN. Turning Haiti over to this underworld gang out of concern for Aristide's lack of "good governance" is like escaping an annoying date by accepting a lift home from Charles Manson.

In the interview Aristide offers his rationale for why the US, aided by France and Canada (and others), conspired to oust him from power:

But Washington's negotiators made one demand that Aristide could not accept: the immediate sell-off of Haiti's state-owned enterprises, including phones and electricity. Aristide argued that unregulated privatization would transform state monopolies into private oligarchies, increasing the riches of Haiti's elite and stripping the poor of their national wealth. He says the proposal simply didn't add up: "Being honest means saying two plus two equals four. They wanted us to sing two plus two equals five."

While I do read Aristide's words critically and skeptically (it's very likely that he, like government leaders everywhere, presided over extensive corruption), I also keep in mind the Clinton administration's support for the failed logic of global neoliberalism and its push for privatization of national industries, both of which have accelerated under W Bush, whose hostility towards leftist and left-leaning governments across Latin America--in Cuba and Venezuela most obviously, but also Brazil, Chile, Argentina, and most recently Uruguay and the Dominican Republic--is well documented.

Clinton, as Klein's exchange states, restored Aristide to power in 1994, with a terrible proviso, which the Haitian leader, for reasons of national sovereignty, wasn't willing to (or able to) fulfill, dooming his and his successor René Préval's governments. But the worst losers in this gambit have been the Haitian poor, especially the majority who elected Aristide; they are struggling not only to eke out livings, but also to avoid being killed by those affiliated with the coup plotters and the US-backed UN troops (many of whom, ironically enough, are from Brazil). Yet even those whose obstruction enabled the coup are suffering as well, as Haiti disintegrates even further into political and economic chaos.
Posted by John K at 9:58 PM