The newsmedia and many blogs have covered to the extent possible this morning's terrorist bombings in London, so I don't have much to add beyond my expression of unsurprised horror, sadness and outrage that London was attacked and my condolences to the families of the 40 or so people who were killed and my best wishes to the more than 300 injured. 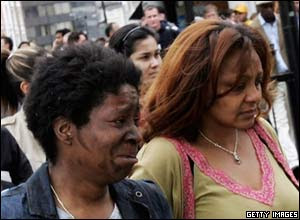 Only those wearing blinders fail to see that the Iraq War has become a chief recruiting tool for Al Qaeda and its sympathizers or to acknowledge the overall rise in terrorist acts over the last three years, at least as documented by the US State Department; and given that Britain's Labour Prime Minister Tony Blair has been not only the US's, but in particular George W. Bush's, most stalwart ally since the September 11, 2005 attacks, first in toppling the Taliban in Afghanistan, and then in the ill-advised war in Iraq, it was only a matter of time before Britain itself suffered a terrorist blow, especially in its sprawling, ancient capital city. Even the British security services recognized this, though it appears they initially believed today's terrorist threat was aimed at Israeli interests, and warned the Israeli embassy minutes before the first bomb went off, which kept Israeli Finance Minister (and former Prime Minister) Benjamin Netanyahu in his hotel room and away from the site of his meeting, which was to occur, it seems, just above where one of the bombs went off! Yahoo! News has reported on this, but I saw no mention of it on the TV news or in several of the online newspapers I browsed, so perhaps it's not common knowledge or is just being suppressed. With the "mainstream" media these days, how can you ever know?

I've railed in other spaces against the surveillance society that Blair has fostered in Britain over the last decade, but one good outcome of all the security cameras in London may be that it'll be easier for the British authorities to catch the people who planted the bombs, which seem to have gone off by timer or remote, and in so doing to uncover or unravel other cells or any web of people linked, even tenuously, to Al Qaeda. Also, though I am no fan of the police, from all accounts I've seen, I gather that the British police, fire and rescue, and emergency officers, who had previously drilled in case of such an eventuality, responded swiftly and with great care and professionalism.

I sincerely hope that New York's and our country's senior officials are taking note, since the Big Apple unfortunately remains a prime target. In fact, the London attacks can--and probably should be seen--as an indirect attack as well on the US. Despite the tragedies of 9.11.2001 and all the vows to improve coordination (let me add that on that day the New York police and fire officials, like innumerable New Yorkers, performed a heroic effort), just a year ago C. and I, like hundreds of thousands of New Yorkers and New Jerseyans, encountered utter pandemonium and found it extremely difficult to leave the city during the blackout; it was if there were no plans for such a major contingency, which thankfully was not the result of terrorist actions. Supposedly Mayor Bloomberg and the police did learn valuable lessons that day, and I hope they've woven them into everything else they've learned in order to be able to provide the best response if the worst occurs again, which I pray it won't.

Today I did notice a few police on the NJ Transit Light Rail train, but none on my PATH train, though I'm told they were out in force earlier in the day. Perhaps the attacks, horrible as they were, may spur the government also to address the many lingering security holes across the nation, including the outdated and underfunded Coast Guard, the underprotected chemical and nuclear facilities, the general porousness of the southern border and the ability of illegals to gain access to sensitive national and private facilities. Perhaps.

Lost in the news today was the Zarqawi group's shocking murder of Egypt's top envoy to Iraq, Ihab Al-Sherif. This was very significant news given that Sherif was going to be the first official ambassador to Iraq from a predominantly Sunni Arab country, and Egypt also has been a close ally of the US in the region. Instead, Egypt is now withdrawing its staff, and last night Pakistan withdrew its envoy after he survived an attempted attack (Bahrain's was wounded but survived a kidnapping). At the same time that this was occurring, Iraq was signing a military accord, which included training, with Iran, the second nation in W's infamous "axis of evil." Iran just elected one of the most ultraconservative leaders in its recently history, Mahmoud Ahmadinejad. The W administration's claims, after the failure to find WMDs and decisively link Hussein to Al Qaeda, included the desire to promote a secular, Western-leaning democracy in Iraq; instead, the conservative Shi'ite majority won and now control the government, the Sunnis remain disaffected and many are fueling the rebellion, and the nation the US most hoped to thwart, Iran, is now the Iraqi government's closest ally in the region. (We shouldn't forget that Ahmed Chalabi, who funneled so much bad information to the US government that he got to sit behind Laura Bush at the 2004 State of the Union address, and who transformed the now-jailed Times reporter and government shill Judy Miller into another info drop, is not only Iraq's Deputy Prime Minister of and Acting Oil Minister, but a close friend of--alleged counteragent for--Iran.) You couldn't make this stuff up....

At any rate, one very positive bit of news is that fellow CC'er and poet Christina Springer and her family, who moved to London last year, I believe, are safe and doing well, and as she often does, she has posted a poem about her experiences on her site, which is always worth the visit.
Posted by John K at 10:28 PM