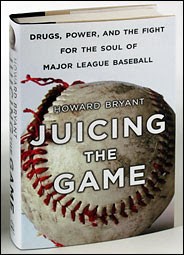 Howard Bryant, the talented author of the acclaimed Shut Out: A Story of Race and Baseball in Boston and the younger brother of brilliant writer and friend Tisa B., has just published a new book, Juicing the Game: Drugs, Power and the Fight for the Soul of Major League Baseball (Viking, 2005) on the steroid scandal, and in the process has hit a grand slam, which seems the like most appropriate metaphor given Michiko Kakutani's glowing review, "The Taint Baseball Couldn't Wish Away," in tomorrow's New York Times.

Kakutani is one of the toughest (and sometimes harshest) book critics writing today, so a rave from her is noteworthy. About Bryant's new book, she says," "In 'Juicing the Game,' Mr. Bryant...provides a smart, savvy appraisal of the steroid scandal, looking at its genesis and evolution and its implications for the game." She continues:

Mr. Bryant's book, which draws upon in-depth interviews with players, baseball executives, union leaders, team managers and journalists, is informed by a deep knowledge of baseball history. And it's valuable not only for its lucid, unvarnished account of the steroid scandal and its long-term consequences for the game, but also for putting that scandal in context with other conflicts like the decades-old clash between owners and players, the divisiveness fostered by the growing importance of television (which tends to showcase individual heroics over team efforts, home runs over less spectacular plays) and pitchers' complaints that the game's recent infatuation with offense has devalued their own craft.

You can read the full review online (the NY Times requires registration). I also highly recommend Bryant's excellent first book on the Boston Red Sox, race and racism, which decisively clarified and historicized for me many of the negative anecdotes, factlets and arcana that I'd heard over the years about last year's Major League championship team.
Posted by John K at 8:30 PM