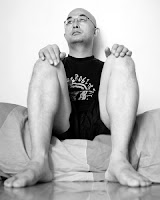 A few weeks back in the Situation of Writing class, which is now concluded, we talked a bit about dissident writers and writing, but I thought about this ongoing issue and how little it's discussed these days as opposed to during the late Cold War period, when I was in college and the US was engaged in its decades-long ideological and political struggle with the Soviet Union, when I read about the plight of Liao Yiwu (廖亦武), a poet and critic, and bestselling author in Germany.  On March 1 Liao was headed for Beijing to connect with a flight to Cologne to attend the lit.Colony/lit.Cologne festival when Chinese authorities pulled him off his plane. Liao was detained, questioned for several hours, and remains under house arrest.

Philip Gourevitch reported about this in a recent New Yorker, adding much background information about Liao's work and activism, but I've seen almost no mention of it in the mainstream media. In fact, I rarely if ever see any discussion of the treatment of Chinese dissidents in the media or among government officials, not least conservatives/Republicans, who still love to rant about "communism" and "socialism" (and harp on Cuba and Venezuela, no less) however terribly misapplied both labels are: I guess the price of China's underwriting our unsustainable way of living is, despicably, official silence.

But back to Liao: this was the second time he'd gotten in trouble involving potential travel to Germany. As the Human Rights in China website (h/t Pierre Joris) points out

In early 2010, after Liao Yiwu accepted the invitation to attend lit.Cologue from March 10 to March 20 – with planned activities including lectures, readings, performances with German musicians, and meetings with German readers – he was warned by police that he would not be permitted to leave the country. On February 8, Liao Yiwu wrote to German Chancellor Angela Merkel to ask for her help, a letter which HRIC previously released in Chinese and English. According to Liao, German officials have relayed a message from Merkel to Liao that she would try to intervene, but that, if unsuccessful, he could wait for the next opportunity.

After Liao’s letter to Merkel was made public, he was threatened by Chengdu police on February 26. They even asked him to cooperate with the government by saying that he did not want to go abroad. The police also warned him against accepting international media interviews, telling Liao, “They are harming you and don’t care whether you live or die.”

This is the second time in less than six months that Liao has been denied permission to travel abroad. In October 2009, Liao was not permitted to go to Germany to attend the Frankfurt Book Fair.

Liao nevertheless wrote a letter to his German readers, which was posted on the ; and it's worth posting in toto.


To My German Readers

I regret to say that I have exhausted all my efforts. I remain unable to reach Germany and unable to make it to my reading arranged by the Cologne literature festival [lit.Cologne].

I am physically and mentally exhausted, but I still want to say thank you to everyone.

I have specially sent everyone the xiao song that I wrote and performed. You have already heard it, right?

I learned to play the xiao in prison. My master was an 84-year-old monk. When I first entered prison, he had already been there for many years. This monk, who was aloof from worldly affairs, had also committed a kind of age-old crime—participating in a counterrevolutionary reactionary sect—reactionary sects are secret organizations that exist in remote mountainous regions of China. Their source can be traced back several centuries to the Qing Dynasty, where their aim was to resist foreign rule. Because the villagers supported the old monk, he became the head of the sect. However, he kept nothing by his side besides his Buddhist prayer beads, a wooden fish, and a dongxiao. He did not have any weapons of rebellion.

That was the winter of 1992. The mountains outside the high walls and electric fences were covered with snow. A few of the other prisoners and I were standing, our arms crossed, our necks bent, just staring blankly skyward. All of a sudden, within the sound of the blowing gusts of snow, there was the sound of a whimper. I thought that I was hearing things and vigorously cleaned out my ears, but surprisingly the crying sound became increasingly clear. That kind of desolation that flowed from ancient times gradually froze me.

Without my realizing it, tears froze on my face.

A prisoner next to me said that this was the sound of the dongxiao, it was an old monk who’s playing it. He had been playing it for over ten years but no one knew the meaning of his song. At first, you would feel a mysterious sadness, later just numb. Play on, play on [old monk] – after all, who isn’t sad in prison?

I was deeply moved and I tried to think of any way to get close to the old monk. The first time we met, he was leaning against the bottom of wall. The wind was making a flapping sound and there were a few rays of sunlight scattered on the top of the wall. He was like a turtle with his neck retracted, his hands covered with varicose veins were grasping a bamboo pipe [also] covered in blue veins. He was playing it quietly, repeating the same tune over and over. I stood before him but his eyes were closed. He was solely absorbed in his own sound or perhaps his memories. I don’t know how much time passed before he raised his head and met my gaze; we both froze, staring blankly at each other.

He asked me, do you want to learn?

Then he said, you’ll need to find a xiao to play.

And thus I became his last disciple.

Where is the old monk now? I do not know. I only know that after more than a year, after I had completed my sentence and left prison, he was still inside. I was especially worried about him that night, but I couldn’t find him; I could only play my xiao and let the floating sound tell him that his disciple was leaving.

But he remained silent. In my heart I believe that he heard me and stubbornly kept silent.

I played several songs. Finally, from beyond the roof ridges of the layers upon layers of high walls, came the sound of an answering xiao, playing a song called “Dakai Men” (“The Great Open Door”), a tune said to be over two hundred years old. I understood the old monk’s goodbye in an instant. The locked door has already opened, just go, don’t look back, walk on, walk, walk until you have forgotten the inside.

I called out, Master! Were he still alive, he would be 100 years old in the blink of an eye.

To my dear readers in Germany whom I have never met, how many other sages like my master are there among the Chinese people now? I do not know. How many innocent political prisoners are still imprisoned? I also do not know. Before the June Fourth massacre in 1989, how many old blood stains have been wiped away? I still do not know. But writers like me from the bottom of society still have to write, record, and broadcast [our stories], even to the dismay of the Communist Party of China. I have the responsibility to make you understand that the life of the Chinese spirit is longer than the totalitarian government.

Below I entrust my fellow writer in Germany Miss Liao Tianqi to read my piece, “Chuigushou jian hao-sang zhe Li Changgeng.” The main character of this piece plays the suona, a Chinese musical instrument made of copper. The pitch is high, intense, and sharp like a knife. It contrasts distinctly with the dongxiao that my master taught, but the spirits of the instruments are the same.

These two instruments, with the addition of wailing mourners, are also used to remember the dead and to console the living.

In this China which is free for neither the living nor the dead, my readers, your attentive listening to this story will also comfort me at the edge of the grave.

Liao Yiwu
From my home on the outskirts of rural Chengdu, Sichuan Province
March 2010