International Women's Day + On the road to vegetarianism?

Happy International Women's Day!  Today, all over the world, countries are celebrating the lives and contributions of women, and in some countries, like China, Vietnam and Russia, today is a holiday. This year's United Nations global theme is Equal rights, equal opportunities: Progress for all, a goal that we're far from all over the world, including the United States, though we continue to make advances.

Throughout today across the US, there have been some 130 official events, including President Obama and First Lady Michelle Obama's tribute and reception in the White House this afternoon.

The first International Women's Day took place in 1911, so next year will mark the centenary. In honor of today and next year's 100th anniversary, think about how you might make a contribution to improving the lives of women and girls across the globe.  One thing I thought of this morning was that poor and working-class women and girls in Haiti and Chile are particularly vulnerable right now, and could greatly use various kinds of assistance.  If anyone knows of organizations that will channel aid of kinds to them, please let me know, and I'll post the links here. 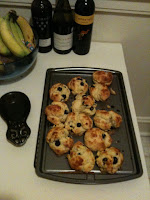 On a completely different note, I've been trying to figure out a way to write on here about how I've become an almost-vegetarian since January (2010), which has also meant, interestingly enough, that I've lost about 15-18 lbs. (I was 219 lbs. on January 4, and I range between 200-203 lbs. today.) This has happened less from me consciously dieting, but rather from cooking even more regularly than in the past, eating less meat--I've gone long stretches, perhaps the longest a week--following more of a pattern in what I eat (coffee and oatmeal for breakfast, fruits and a sandwich for lunch, a cooked meal for dinner, with wine and dessert), and mostly centering my diet around fruits, vegetables, grains, and legumes.  In the process, and while not really changing my daily driving routine and not going to the gym any more (usually 3 days/nights max) than I have in the past, I have shed the pounds and yet I am eating many of the things that people are urged not to eat: lots of CARBS.

Some of these are complex carbohydrates, as in fruits (apples, pears, oranges, kiwi fruit, bananas, tomatoes, all kinds of berries) and vegetables (you name it, I eat it, from beets and turnips to eggplant, carrots and brussel sprouts), and some are semi-refined, as in various breads and pastries, or chocolate, etc. But, here's the deal: I have hardly eaten any store-bought bread since January. All the bread loaves (J's Theater readers know my love of breadmaking), scones (very easy to make, and they include heavy cream, eggs, butter, and sugar), even hamburger buns, I've made myself.  I also have been eating lots of other kinds of grains (in addition to the oatmeal, brown rice and whole wheat pasta, which is so delicious and naturally sweet I don't understand why it's not more popular, I've tried Moroccan big grain couscous, quinoa, and small grain types) and legumes (red and green lentils, black and kidney beans, great Northern beans, etc.). And lastly, I eat lots of walnuts, peanuts, cashews, and other kinds of nuts. And the pounds have come off.

I was trying to think if this mode of eating was inspired by the trip to Sicily (and I've broken the meatlessness mostly with slices of sausage or pepperoni pizza and fish), which is to say, by the sort of Mediterranean diet we experienced there, and perhaps it was, but I also think I've reached an age where I'm able to say, I can do without meat every night and also, I can prepare what I want, try it out, and if it works, let's go with it. And it's worked out. In some cases, I've taken imaginative leaps in terms of meals that I probably wouldn't have in the past.  To give one example, a few nights ago, I decided to make eggplant and yellow squash, seasoned with garam masala, and combine that with a side dish of cooked beets, and as my starch, have the finer grained couscous. I wondered for a minute how the combination would work, but it was delicious. The pungency and sweetness of the seasoned eggplants and squash played well off the sweet beets, and were a perfect complement to the couscous. The combo also filled me up completely, and I had enough for 3 nights. I've found that I don't miss having meat with the meal at all--combinations of several different vegetables usually do the trick--though it would be easy to integrate some in if I wanted. 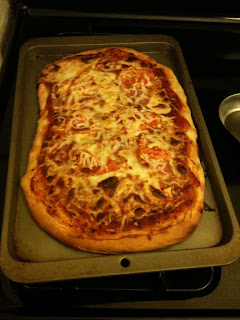 I mention the carbs above, because the unyielding law I hear from people is that if they're trying to lose weight they cannot eat carbs. No carbs. Zero. Nada. Etc. It's all proteins and heavy exercise, and starvation, and whatever else they've tried. There's also the issue of limiting portions, and so forth. I am not dismissing all of this (though I will say that no one ever got obese eating apples, oranges or carrots), but eating moderately, reasonably, and cutting back on the meat has worked for me. I did take a glance at Michael Pollan's new book, Food Rules just before I headed back to Chicago, and while I think that following any kinds of restrictive rules for eating or anything else is problematic, most were commonsense and in a spirit not of restriction or prescription, but as a helpful guide of the sort Americans love. One of them went along the lines of: you can treat yourself to sweets and so forth but only if you make them yourself. Part of the genius of this is that if you have to make something, you probably won't be craving it all the time once you realize how much effort it takes, but also you'll have enough to last a while and you know exactly what goes into it. I tried this philosophy with blueberry cream scones, since I love pastries (I can really eat anything in the muffin, scone, cake, or pie families), and it worked perfectly. For several weeks, my lunches consisted of three pieces of fruit (usually an apple, which I used to find wouldn't fill me up; an orange or tangerine; and a third piece of fruit, usually either a banana or a kiwi fruit, though I found cheap star fruits (!) at the organic coop I shop at, and those provided a tart and delicious conclusion to the trio) and one of the scones, which are lighter than any scone I've ever bought at the store, and I was full. And, as I've said above, I still lost weight. Eating scones daily. On top of this, I also sometimes would have one for dessert, with or without butter and jam. And I lost weight.

Another effect is that I have more energy, and never feel bloated like I used to. I know many people have diagnosed their stomach issues to gluten, but despite all the bread I eat, I never feel the bloat I used to at times. I think it has everything to do with the fact that I'm baking the bread and know exactly what goes into it, and hyperenriched gluten (or whatever they're calling the gluten that goes into most commercial bread), and all the preservatives, including bromines, are not in my breads. I try to use organic flours and sea salt, and add flavor to the natural sweetness of the wheat, barley or rye flours with additions like rosemary, black olives, pecans, walnuts, raisins, and, my new favorite, sundried tomatoes. Again, despite the daily bread (and oats, and other grains), and snacking (sometimes with crackers and cheese, artichoke spread, etc.), the pounds have come off. 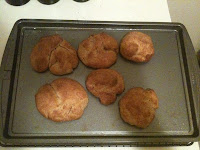 A few things I haven't eaten much of recently are potatoes (though I do love and eat sweet potatoes, but I've found turnips are a more flavorful alternative, and since they're extremely easy and quick to cook, they've done the trick), corn, any prepared spreads (except mustard, which I guess I should start making myself, since it's quite easy), and far less unfermented soy. In fact, the only times I have unfermented soy these days is when I'm drinking hot chocolate made with soy milk. I used to overdose on this stuff, until I read a few too many articles on the dangers of it. I do admit that I miss eating french fries, which are extremely easy to make and one of my favorite foods, but I think that if I'm going to have them, I'll be sure to buy organic potatoes and bake (or fry!) them myself.  One additional effect is that my blood pressure--and, I imagine my bad cholesterol, though my doctor will have to check this--has gone down. This has been the case despite my stress levels remaining relatively equal to prior years. Perhaps it's the loss of weight, especially around my stomach, perhaps it's the absence of the meat, but this does appear to be occurring.

I know that Michael Pollen discusses this with much greater sophistication in The Omnivore's Dilemma and other works, as do others in relation specifically to vegetarianism, locavorism, sustainable and healthy eating, the slow and raw food movements, and so forth. I agree with many of these approaches in and on principle; factory farming, especially of livestock, is inhumane and abhorrent, and industrial farming is doing tremendous destruction to the environment, to the economy, and to our bodies; eating locally, organically, and sustainably will benefit all of us in the long run. We also do not have to eat meat to the degree that we've come to expect in the US, nor should we be eating fast and prepared foods to the extent we do. The effects are visible everywhere, in the landscape and in us. Yet what's motivated me has been less of these beliefs that something perhaps less coherent and articulable; and yet I've felt like I've wanted to say something about my own personal creeping vegetarianism--though, as I said, I still do occasionally eat meat, and fish, and had a turkey burger the other night, on homemade buns no less (they take no time and are delicious!)--thus this somewhat incoherent entry.  Thoughts?
Posted by John K at 9:45 PM