Spring break came, I left the grid for a bit (including, amazingly for me, Twitter), but now the new quarter is set to begin. I am teaching two classes: one is a continuation of the advanced fiction writing-novella class (Theory and Practice of Fiction), and the other is a brand new experiment, an advanced creative writing class, Concepts of Conceptual Art. I'm charged up about both; the novella class's first half-quarter went pretty well, I thought, and all of the students produced what approximated the beginning of a long work (long short story/novella) by the end of the quarter, so now they'll be refining these and extending this work to create something that is or approaches a novella. Our final reading is Don DeLillo's curious, powerful novella, Pafko at the Wall, which he originally published as a folio in Harpers in 1992, but which he later incorporated as the prologue to his greatest novel (in my opinion), Underworld (1997). After DeLillo, it's on to their work exclusively.

With the Conceptual Art class, there isn't enough time to explore all the theorists, artists, and movements I'd hoped to, so we'll start with a bit of background, moving from Idealism (Plato) to Formalism (Aristotle, Kant), then look at Walter Pater and Oscar Wilde, Marcel Duchamp (+ Dada and Surrealism), and Clement Greenberg, one of the chief formalists against whom many of the American conceptualists were reacting, and then explore conceptual music (Cage, Finer, Reynols), conceptual art and performance (Situationists, George Brecht, Alan Kaprow, Adrian Piper, Yoko Ono, Sol LeWitt, etc.), and finally conclude with conceptual writing (Warhol, Stephens/Nathanaël, Philip, Goldsmith, Mesmer, and Lewis Obadike + Obadike). Things aren't as schematic as this appears, and I will be including some theorists like Lucy Lippard, Rob Fitterman, perhaps Benjamin Buchloh, etc. I also am going to have them create a number of projects, ranging from event scores to a durational project. I hope it'll be as fun for them as it's been for me to conceive the class. Tomorrow, too, I hope to perform Cage's 4'33" for them as part of our opening discussion.

Just a glimpse of something really cool: C, who's doing development projects with his new company, created a prototype iPhone app of this blog, pictured below. It's not available for downloading yet, but I've been playing with and testing it since he created it, and it works really well.  Doesn't it look cool?  I'm looking forward to him creating many more. 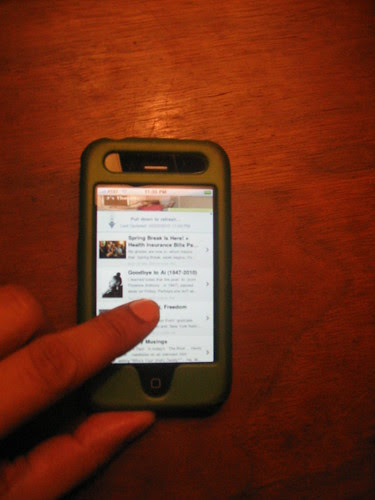 Prototype app of my blog on my iPhone 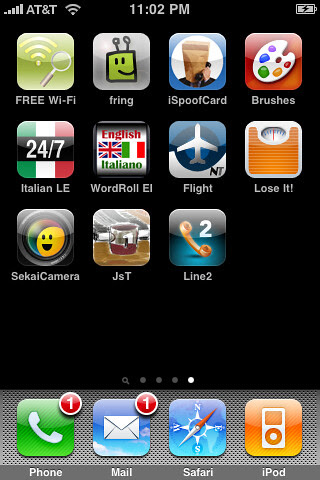 Screenshot, from my iPhone (JTs is the prototype app) 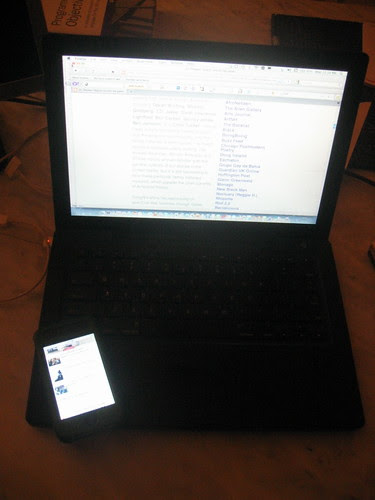 My blog on my MacBook and on the iPhone (app prototype) 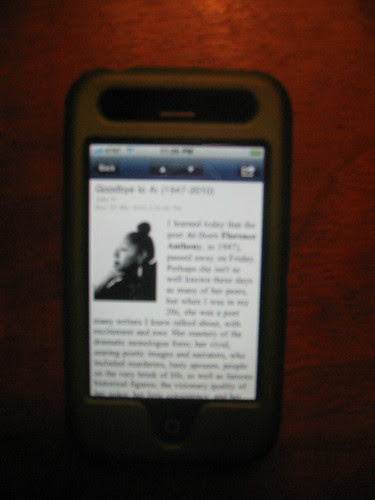 Today, when I got back to Chicago, I met up with my cousin and her husband, and both, though pretty well informed, admitted to bafflement over the rage and vituperation of the Tea Party teabaggers. Why, they wanted to know, were these people so angry that they had moved from bilious rallies to racist, ethnicist and homophobic epithets hurled at and spitting on Congresspeople, to outright violent and vandalism, like hurling bricks through windows, cutting gas lines, and issuing death threats, over a health care bill? My cousin thought it might have something to do with higher taxes for everyone; her husband wondered if there were some sort of poison pill that no one had heard about in the legislation; both concurred that in part it had to do with the right-wing's visceral hatred of President Barack Obama.  I offered my thoughts about this now enacted Republican-style program, its background, and the furor surrounding it, but I mentioned some online posts I read that really spelled out the crux of the teabaggers' venom, as well as the truth of who many of these people are.  The irony that many of these folks are unemployed and relying upon government programs to survive seems to be utterly lost on them, but this wouldn't be the first time this happened in American history.

In case you haven't seen these, here are some links:

Frank Rich: "The Rage Is Not About Health Care"

Kate Zernike: "With No Jobs, Plenty of Time for Tea Party"

Ronald Brownstein: "Dems Caught In Populist Crossfire:
Most white Americans think health reform benefits the poor and uninsured, not people like them"

Stanley Kutler: "So Much for a Post-Racial America"