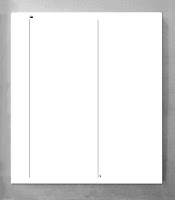 Returning to teaching after a short break is always easier than after a long(er) one. I'll say no more about my classes for now except that my performance of John Cage's 4'33", which I improvised on/using my computer (projecting the keyboard onto the hanging screen), and 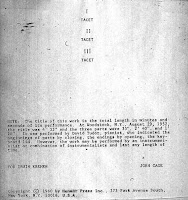 followed by giving students a double-sided copy featuring the first two versions of the score (cf. below) on one side and Cage's original commentary about the piece, along with a series of questions I sought to have the students answer at that moment and without a lot of thought, appeared to go over well. It also was the first musical performance I've given since adolescence (band). 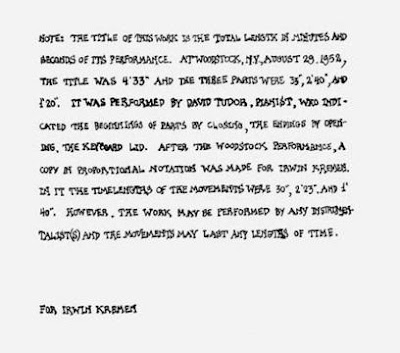 What a quarter this ought to be.

Speaking of conceptual art performances, I would have paid double to see this particular Marina Abramovic performance at the Met: what began this past Saturday, March 27, 2010, as another day of Abramovic's reprise of her marathon sitting-still-in-silence performance, "The Artist Is Present," turned into something quite different, when a young woman wearing her hair in a black knot over her shoulder, just like Abramovic, and dressed in a long blue caftan, like Abramovic, took her place across from Abramovic and, to the bemusement, awe, consternation, and surprise of other attendees, proceeded to mirror Abramovic's performance with a remarkable one of her own. She did not speak, she did not move, she did not nod off or rise to use the bathroom or anything else: for the rest of the day, she matched Abramovic's presence with her own, leaving only when the gallery closed and guards politely ushered her out.

The performer: Brooklyn-based artist Anya Liftig. The performance? "The Anxiety of Influence," a title she took from the eponymous book by critic Harold Bloom. Why did she do it? She explains her rationale and her motives to Tatiana Berg at Bomblog.  A quote:


I did feel like a transgressor but I love the subtle art of subversion—playing with ideas from the inside out. As I was sitting there, I felt like that was one of the strongest elements of Marina’s piece. She is attempting to “interact” with the audience, but really, the endeavor for empathy is one of implicit sadness, as we connect and miss one another. It is not meant to be read at face value. It also brings up the role of the artist, how they connect on an individual, emotional level with others when they are constantly being observed and commented upon by the masses held at bay by the guards. 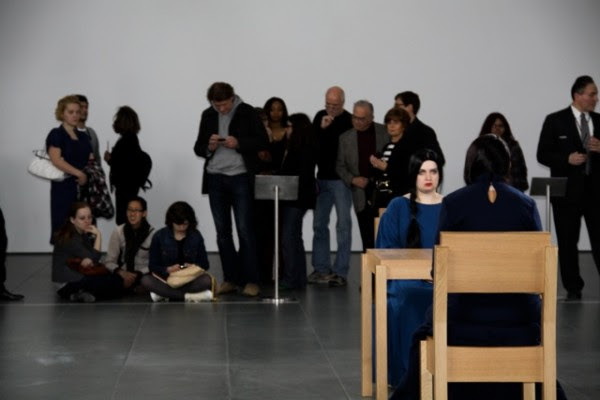 (I'll let Liftig speak for herself, but this reminds me of Yoko Ono's famous "Cut Piece," to give one example, and the marvelous unpredictability of performance, particularly of the conceptual sort, and the role, with all its attendant possibilities and dangers, that other participants can play.)

As for playing games with serious, grave consequences, and the disinformation campaign that currently plagues our political discourse, here's at least part of the reason why (the "mainstream" media are also a huge part of the problem):

As to confronting liars and criminals, Code Pink took some direct action this weekend, confronting fascistic propagandist Karl Rove as he attempted to spew his mendacities, now packaged as a "memoir," in southern California. Guess what? He fled.