Well, I am finally done. The students' grades are all in, undergraduate and graduate, and the school year is over!

For my brutal lecture course, I want to give special and sustained thanks to Brietta, Patricia, Sarah, Wana, and Wendy, my wonderful TAs, whose brilliance, insight and diligence I cannot say enough about. And to all the students, thank you for a great quarter.

Here are some of them in the lecture hall, taking their final exam. 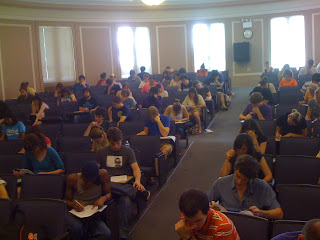 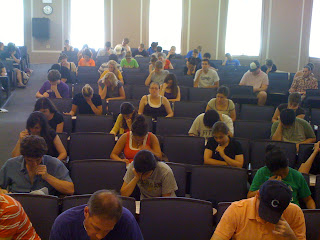 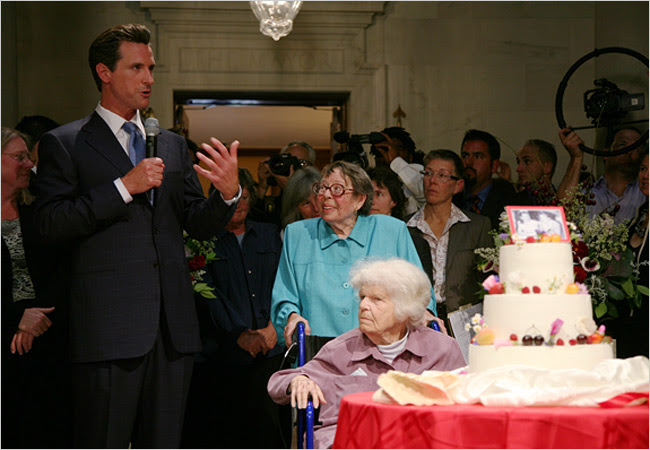 It's official, extraordinary and still somewhat unbelievable to me. Whatever you feel about marriage as an institution (I personally have always been somewhat of a skeptic), California has taken a huge step in terms of equality under the law. This evening, the Golden State will begin issuing marriage licences to same-sex couples, and legally permit same-sex weddings to occur. (At right, from the New York Times: Del Martin, seated, and Phyllis Lyon were the first same-sex couple in San Francisco to exchange wedding vows on Monday. Mayor Gavin Newsom, left, presided; Jim Wilson/The New York Times).

I knew this day was coming, and I figured that California would be on the leading edge, but I didn't know it would happen so swiftly, especially after Republican Governor Arnold Schwarzenegger (twice?) declined to sign bills permitting gay marriage passed by the California legislature. The marriages still face the threat of an anti-same sex marriage referendum, which will be voted on this upcoming November, I believe, but the most recent opinion polls I've seen appear to show a majority support same-sex marriages being legal.

With New York's governor David Paterson announcing that he wants the state to follow legal rulings and recognize same-sex marriages, and with California allowing marriages of out-of-state same-sex couples, how much longer will it be before other states beyond Massachusetts recognize these couples or change their own laws? What will the next states to take this step be? I predict that of the non-civil union states, Rhode Island will be among the first; of the civil union states, Vermont and New Jersey, where I believe a challenge to the legality of not allowing same-sex marriages is still wending its way through the courts. And which states that have barred same-sex marriages will be among the first to repeal those laws?
Posted by John K at 11:59 PM