First, congratulations to all the Ph.D. students in my department who took their orals this week: all passed! And especial congrats to one of my TAs, Wanalee Romero!

Congratulations to Felicia Butts, the brillliant student whose honors thesis in African American studies I supervised this winter and spring. Felicia was one of two students to receive departmental honors, and she graduates in a few weeks, so congratulations!

Congratulations to all of my former writing students and to all the students who received prizes at last week's departmental prize ceremony!

Congratulations to my colleague Barnor Hesse, one of the smartest people I've ever come across, who received tenure!

Congratulations (belated) to my friend, exemplary editor, writer and teacher, Rone Shavers, who successfully defended his Ph.D. at the University of Illinois-Chicago not long ago! Rone also has a gotten a job on the East Coast, and as my students who studied with him will attest, he will rock! And when his novel appears....

Congratulations to the many, many Cave Canem-affiliated writers who've received awards, graduated from various programs, are publishing new books, chapbooks, pamphlets, and who're lighting up the literary and cultural realms!

We are still in the midst of senior major readings and graduation is still several weeks away, but congratulations also to all of my many undergraduate and graduate students, in the major, in the minor, in the English and African American studies departments, and in the graduate creative writing program!

It's spring, right? Almost summer? Here are some photos from yesterday in Chicago. It was so foggy when I drove up to the university that I vowed I'd drop by the beach after work to take pictures. I went to Leone Park Beach, in Rogers Park, and snapped quite a few, but here are four. Standing outside near Sheridan Road, the air was cool but not especially gauzy, but the closer I walked towards the sand and water, the chillier and denser it became. It actually felt quite wonderful, though I would much rather have the sun beaming and 70s weather. It also reminded me of San Francisco when I visited there some years ago; it was June, I think, but the temperature was in the low 60s and, when my cousin and I took a little trip around the city, we reached the summit some hill and you could both see and feel the fog not far away. I'll take the fog over snow and ice any day. 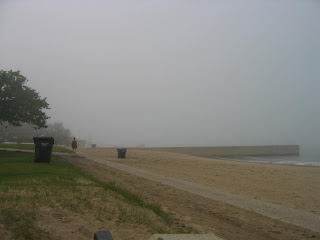 The beach facing north, towards Evanston 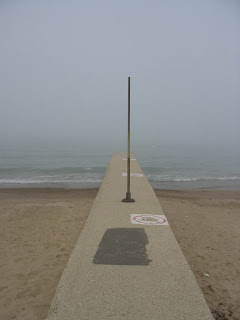 One of the concrete piers, facing west, towards the lake and Michigan 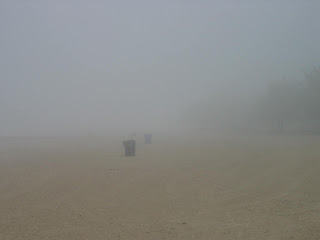 Look south towards downtown Chicago (I've been to Britain but never to British beaches or to any part of Ireland, but this is what I imagine they look like around this time) A kayaker heading out into the lake! (He asked me if the police "up here" give lots of tickets, I guess to figure out if he should leave his car at an unpaid meter, so I let him know that they gave out tickets like candy. He found a meterless, tow-less parking spot soon after, and I guess was on his way. I didn't check to find out if he was from Illinois or some neighboring state--Wisconsin? Indiana? Kayaking under these conditions strikes me as a bit terrifying and foolhardy, but what do I know?)

Good old Chicago, which has (along with Hawaii and other points along the map) given us our next President Barack Obama.

Some interesting points: Obama's margin of victory in Cook County (which includes the cities of Evanston, Oak Park, Winnetka, and a few other well-known Chicagoland venues) was about 400,000 votes, which about equals his popular vote margin over Senator Hillary Clinton if you exclude Michigan and Florida.

Senator Obama won his 2004 Illinois Senate race in a landslide, and Illinois was the first state ever to elect an African-American Democrat to the US Senate, doing so in 1992 when it elected the history-making Carol Moseley Braun, who defeated an incumbent, Alan Dixon, in the primary, and then defeated her Republican challenger Richard Williamson by 10 points. Moseley Braun remains the only woman elected to the US Senate from Illinois, and the only African-American female Senator ever. Illinois is now reliably Democratic in presidential elections, having not voted for a Republican presidential candidate since 1988 (George H. W. Bush). The state has elected a Republican Senator, Peter Fitzgerald (who defeated Moseley Braun in 1998), since then, though he served only one term. Chicago, the state's metropolis and the hub of the entire Midwest, has made great strides as well. 25 years ago, it elected its first African-American mayor, Harold Washington, who served for one full term and part of an abbreviated second one (which Eugene Sawyer, another black politician, served out); this was a landmark election in a city that was long considered (and well chronicled, by figures such as Richard Wright, Gwendolyn Brooks, Studs Terkel, and others) as perhaps the most segregated and violence-wracked in the North.

Rick Perlstein, the author of the highly praised new book Nixonland, a history of contemporary Republican-conservative political dominance, notes the changes that have occurred in Illinois and Chicago alone in his blogpost today. He discusses the general backlash against this legislation, and the many letters with which constituents besieged Illinois liberal Democratic Senator Paul Douglas concerning the open housing legislation, one of a raft of liberal legislative triumphs that President Lyndon Johnson and the Democratic Congress passed in the wake of his landslide 1964 election, and which led, Perlstein notes, to severe Democratic losses in the 1966 election, two years after which Richard Nixon was elected President of the United States. In that 1966 election, Douglas, an economics professor who'd been one of the architects of the New Deal and a passionate advocate for civil rights, lost to the wealthy executive and moderate Republican Charles Percy, who remained in office until his defeat by another progressive Democrat, Paul Simon, in 1984. Perlstein posts some of the letters, which are potent reminders of the widespread, fear, ignorance, hate, and misunderstanding that has often marked the history of this country, and of how far, in some ways at least, we've come. Here are a few:

Recently we members of the Marquette Park area of Chicago witnessed violence over the so called subject of civil rights. Since the Civil Rights Act Act was passed all we have seen is violence, riots, and general defiance of the laws of our land by the Negro population under the guise of this nebulous term, civil rights. When is the Congress going to wake up to the fact that it cannot legislate morals or love?
"We white people have taken a lot from the Negro. We have been patient, and now find ourselves pushed up against a wall by groups that feel it is their God given right to have our property. We have worked hard and saved to get what we now own. Because we do work hard and wish to maintain our property are we to be denied the right to dispose of our property as we see fit? Is the ultimate aim the same as the Soviet Union when all property was collectivized....
The Civil Rights legislation amendment that which deals with the so-called open occupancy law is disgusting and makes me almost ashamed to admit that it has been proposed in America. All this civil rights legislation is un-American.

At least fifty square of Chiago is occupied by negroes which means that no part of that area is safe for white people to travel...
It is safe to say that not a single white person has ever moved into a negro neighorhood yet there has been over a million white people dumped, shoved, or pushed out of their homes by expansion of negroes....
"NEGROES HAVE BEEN MADE THE BOSS OF THE UNITED STATES.

As a member of the over 150 million white population of this country, I respectfully request that some action be taken to prevent such demonstrations in the Nation's capitol. This is an imposition on the majority and prevents the average citizens from enjoying his capital. This is itself is one of the most severe forms of discrimination.

Here is the fundamental tragedy of the backlash: Voters like this empowered a party that decided they didn't need protection against predatory subprime mortgage fraud. Didn't need affordable, universal health insurance; made it easier for companies to rape their pensions; kept on going back to the well to destroy their Social Security; worked avidly to shred their union protections. Fought, in fact, every decent and wise social provision that made it possible in the first place for mere factory workers to live in glorious Chicago bungalows, or suburban homes, in the first place.

Now a black man from the city King visited in 1966 and called more hateful than Mississippi is running for president, fighting for all those things that made the mid-century American middle class the glory of world civilization, but which that middle class squandered out of the small-mindedness of backlash.

On his Monaga blog, Anthony points to Joe Contreras's new Newsweek article, on the rise of Afrolatinos. Here are the first two paragraphs of Contreras's piece:

Hugo Chávez is known as a revolutionary in many contexts, especially his defiance of the United States. In recent years, however, he's also broken ground on a far less well-exposed subject: the question of race in Latin America. The saga began two years ago, when, during a tour of Gambia, Chávez surprised observers by declaring that "I've always said that if Spain is our mother, Africa, mother Africa, is much more so." Since then, the Venezuelan leader has often revisited the theme at home, even drawing attention to his own African roots. It may not sound shocking. But such language would have been inconceivable from a major Latin American leader just a short time ago.

That's now changing, due to a black-consciousness movement stirring in Central and South America. Emboldened by the success of their indigenous countrymen in pressing for resolution of long-ignored grievances, Afro-descendientes (people of African descent), as they are known, are now lobbying for recognition of their own communities' land rights and for increased spending to improve living conditions in urban slums and rural villages. Local activists have begun urging Latin blacks to take pride in their culture, and with the help of the Internet, leaders are reaching across borders to share tactics and compare notes with their brethren in the Caribbean, the United States and Africa. This "black-power movement has gone way beyond anything that has happened in the past," says Ann Farnsworth-Alvear, director of Latin American and Latino Studies at the University of Pennsylvania. "People are making critiques of racism in their own societies, and there's been a real shift in black consciousness and involvement.