Quraysh Ali Lansana at Second Sun
I told Krista Franklin today that Naïeveté Studios were becoming my second home in Chicago, and it felt that way today as I was back there to hear fellow poet Quraysh Ali Lansana read from his poetry. Q is a professor at Chicago State University and one of the primary forces behind Chicago State's annual Gwendolyn Brooks Conference Writers' Conference for Black Literature and Creative Writing. It's usually in that capacity that I see him in the city, but he's also the author of two collections of poetry, a children's book, and several chapbooks, and the editor or co-editor of several more, including Roll Call (with Samiya Bashir and Tony Medina, 2002), which included two of my poems. Just a few years ago he published the highly regarded volume They Shall Run--Harriet Tubman Poems (Third World Press, April 2004). He's also a musician, and teaches poetry to Chicago schoolchildren when he's not raising his own family. This afternoon he read early personal poems and very new ones in the same vein, a combination most poets usually don't try except when reading a collected anthology or similar volume, yet his selection worked very well. I mentioned to him during the post-reading affirmation period that his condensed language managed to spring entire worlds forward, which made the poems sound and feel richer than their deceptively brief presences on the page might portend. As always, the crowd was full, there was delicious food, quite a bit of art filled the walls and display nooks, and the winter-dispelling hot wine, which manages to render the December winds a little more bearable, flowed freely as always. 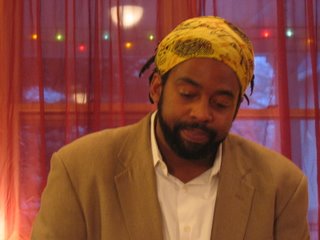 Q, during the reading 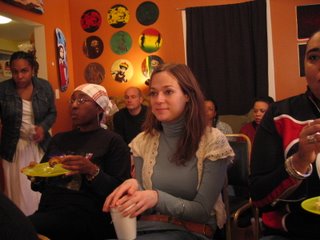 Part of the audience, right before the reading 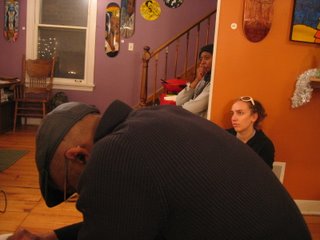 Karen Carter Loses, Democracy Wins (?)
The people of New Orleans overwhelmingly reelected their incumbent federal representative, William Jefferson, despite serious criminal charges hanging over his head, rejecting the challenge by Karen Carter in yesterday's runoff election. Or perhaps he was reelected because of them; Jefferson is an embattled sitting Congressperson, facing federal indictments for alleged bribery and other crimes, and in addition to convincing local and national Black politicians to circle their wagons around him, was able to rally a majority of Black voters and enough Whites in Jefferson Parish, on the southern side of the Mississippi River, to his cause. Despite a progressive history, including founding a "progressive Democratic" group, he attacked Carter's support for gay and abortion rights in the latter weeks of the campaign. The notorious, racist Jefferson Parish sheriff, Henry Lee, also came out harshly against Carter for calling attention to the fact that he forbade New Orleansians and visitors fleeing Hurricane Katrina from crossing a bridge to safety. How effective he can and will be in Washington, as he spends time dealing with lawyers and lawsuits, is anyone's question, and it's also moot how his fellow Democratic caucus will respond. The incoming Speaker of the House, Nancy Pelosi of California, has already removed him from one committee post. Had Carter been elected, she would become the first Black woman to represent Louisiana in Congress. If Jefferson is convicted, and the evidence against him appears damning, Carter very well could head to Washington, though not as soon as she or her supporters would have liked.

Mortgage Market Problems
Today on DailyKos there's a thorough diary on the problems in the mortgage market. The housing market is down in many parts of the country, and has softened considerably in Chicago, but much of the coverage I've seen has focused on sales and building, rather than on the banking side of things. The Kos entry, by bonddad, points to the collapse of the country's 11th largest sub-prime lender, Ownit, the serious problems that 2006 loans in general are having, and the rising price of credit derivatives, which are insurance policies of a sort for mortgages. This is bad news for the economy on many levels, but the mainstream media don't seem to be too interested in reporting it, at least not now when it might scare consumers away from racking up even more debt in pursuit of crap they hardly need and don't really want. But it's worth checking out. 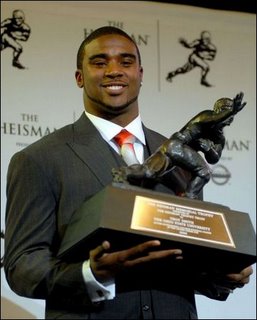 After Rutgers' loss to Cincinnati, which knocked them out of the national race, I pretty much stopped following college football (they subsequently lost to West Virginia and thus were out of the Big East league championship race).

That is, I avoided it as much as I could, though since the university is in the Big 10 conference, I constantly heard about or saw the name of the league's and nation's most dominant team, The Ohio State University, which will play the national championship game against the University of Florida. This year's Heisman Trophy winner is the stunning young man at left (photo from Detroit Free Press, LOUIS LANZANO/Associated Press), Troy Smith, who has quarterbacked Ohio State to its 12-0 record.

Smith graciously thanked his teammates for their roles in his award, and also called attention to a friend's father, Ted Ginn, Jr., who has served as a surrogate parent for him. After a period of attitudinal problems in high school, Smith, with the help of this surrogate father, was able to turn his life around. He'll need every iota of fortitude and perserverance against Florida, a point he duly expressed after receiving the award.

Hell Welcomes a New Resident
That's how Steve Gilliard puts it over at the News Blog, and no, I don't mean Jeane Kirkpatrick. Instead, he and others are writing about the death of Augusto Pinochet, the brutal dictator of Chile for over 15 years, who managed to escape foreign and domestic prosecution for his many crimes, which included the overthrow of the democratically elected socialist government of Salvador Allende, in 1973. (There are many excellent books on Chile's long nightmare, but two of the best, fairly recent fictional ones that come to mind are by the late, extraordinary Roberto Bolaño: By Night in Chile and Distant Star.)