You thought the 2006 midterms were over, right? No, I know you're up on things, and you know that Karen Carter (at right) is in a runoff against scandal-tainted, gay-baiting William Jefferson, in whose freezer the FBI just happened to find $90,000 of a $100K bribe that was allegedly meant for the Nigerian Vice President. (I wish I'd thought of that as a plot element.) Jefferson has not been convicted of anything yet, and is innocent until proven guilty under our legal system, which means that he can still run for Congress and act like he's doing his job, but why not help to ensure that can devote his full energies and time to defending himself and put Karen Carter in office instead? She needs your help to win her 2nd Congressional District race in Louisiana. If elected, she won't be so compromised that she can't work hard for the people of her district, who desperately need a representative focused on their needs and concerns in Washington, as well as one with an active and effective record of legislative success.

If you can, help Karen Carter out and give the Democratic caucus in the House one more voice they need.

Last night, as I paused to break from my work work, I began to write a short fable about a young African-American Senator who once upon a time was a notably outspoken, progressive state legislator, and who, after dazzling viewers nationally with his stirring speech at the Democratic convention and winning election to the US Senate in spectacular landslide fashion, began moving quickly first to the center, and then to the right. Now, instead of addressing union halls and demanding a swift exit for our troops from Iraqmire, he's giggling with evangelicals and identifying faults among his fellow Democrats as he glides among rich potential backers and party hacks in an effort to prepare the ground for a possible presidential run.

Yet I came across a link to a long and involved essay, "Barack Obama Inc." in Harper's, by Ken Silverstein, on my projected fable's protagonist, Senator Barack Obama (above left, in front of the Superman statue in Metropolis, Illinois) and ended up scrapping what I wrote in favor of pointing readers to this superior, informative piece. After reading it, I considered the fact that Illinoisans are in a good position these days, since they have the liberal, very outspoken Dick Durbin in the Democratic leadership, which now has control of the Senate, and a charismatic, Grammy-winning, best-selling national figure, who floats above the fray but still can deliver some local goods when needed. On the other hand, Black Americans really lose out because since Obama has decided to be a national figure--in case he decides to run for the presidency--we have no one willing to take stands specifically on our behalf in that elite club of 100 as Carol Moseley-Braun sometimes would, or as Obama did before his rock-star echo chamber starting blaring. He has consistently opposed the war in Iraq, did speak out about Hurricane Katrina and has proposed some citizen and consumer-friendly legislation, but recently, while gladhanding George Soros and other amply moneyed friends in New York City, he uttered the sort of weak, triangulating mush about the horrific police killing of Sean Bell in Queens that Democratic voters--and not just Black ones--have come to dread from presidency-craving wannabes. Obama cannot be all things to all people, especially most Black people, and right now, he wants to be the bestest, most moderate Demopublican America could ever dream of.

This is why I think it's crucial that in the next election cycle we elect another African-American senator, and preferably a very progressive, outspoken one from a soundly blue state, who has no designs on the presidency. Harold Ford Jr. would not have been that person, since he was ideologically to the right of Arlen Specter, but Kweisi Mfume, despite his personal baggage, might have done it. It's too bad Deval Patrick was just elected governor of Massachusetts, or he'd be a good option. Perhaps New Jersey State Senator Nia Gill, one of Jon Corzine's alleged considerations for the seat that became Bob Menendez's, will run to replace snoozing doozy Frank Lautenberg, who is likely to and should retire after his term is up.

"extraordinary, savagely uncompromised"
So says the iffy Manohla Dargis of David Lynch's INLAND EMPIRE--and there's much more about this super-bizarre Lynchian dream that'll soon be on movie screens. I. cannot. wait. to. see. it!!!

Reception and Reading for Kwame Dawes at Naïeveté Studios
I'll post more photos tomorrow from the reading, which was excellent, but here's one of poet Kwame Dawes, as he was speaking, pre-reading, about "Miss Rosalie," one of the larger-than-life Sumter, South Carolina denizens whose stories and spirits animate his marvelous 11th book of poems Wisteria (Red Hen, 2006). 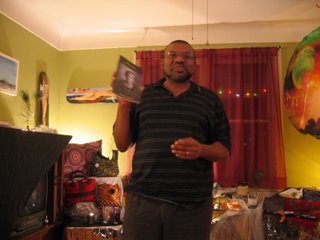 For people in Chicagoland, he'll be reading tomorrow at the University of Illinois Chicago's Institute for the Humanities, at 6 pm, 701 S. Morgan, and giving a lecture on "The Art of Bob Marley" at the Chicago Cultural Center's Claudia Cassidy Theater, 78 E. Washington Street, with receptions to follow both events.
Posted by John K at 9:17 PM