Bedeviled by Beta Blogger
Since I temporarily lost my blog because of my attempt to switch to Beta Blogger, I've kept open my email updates to the thread I started on the Google Groups site, and almost every other day, at least one or two new bloggers join the thread, in complete panic, because their attempted switches to Beta Blogger have resulted in the complete disappearance of their blogs. Like me, they attempt to contact Blogger via its Help site, but receive no response. None. After repeated email appeals, they discover Google Groups Blogger Help Group, find the place to post, and start or join a thread as I did, at which point a Google employee responds fairly quickly and lets them know how to retrieve or refind their blog. This leads me to ask: why does Blogger even have the Help page if they're not going to respond to it concerning vanished blogs? Why not just put a big, blinking sign on it urging people to go directly to Google Groups Blogger Help if the Beta switch turns into a disaster? And why doesn't the Beta Blogger page contain extensive warnings about the potential disappearance of your blog if you try it? Wouldn't Google spare itself a lot of frantic posts, rants, and denunciations if they were up front about the problems people are encountering?

At the Beach in December
Before I began spending part of each year in Chicago, I had never lived in short walking distance to a beach. There are numerous beaches in Massachusetts and New Jersey, but none that I could reach from where C and I haved lived in less than a hour. The one time a buddy of mine and I visited Revere Beach, which was train ride away from where we were living at the time, we got so freaked out by how completely the people, stores and restaurants near there seemed trapped in the mid-1970s, down to a kitschy Shawn Cassidy mirror on the wall of a pizza shop there, that she and I ran as fast as we could back to the train for fear of getting stuck there. We could already feel the mullets starting to grow. The eastern edge of the city of Chicago is lined by an almost continuous beach that I like to stroll to when it's warm or even cool, since I find the churning waves and the rote that fills my ears to be incredibly calming, as well as beautiful. (I am never here in the summers, so I never experience the extensive beach culture--instead, we get the New Jersey kind.) Today, on the way to the university, I stopped (driving, however, not walking) by Loyola Beach, one of the northernmost in Chicago, to spend a few minutes at the vast inland sea, also known as Lake Michigan. It was far too cold (around 25°F in the sun, with a light wind blowing landwards) to stand outside longer than a few minutes, but I love visiting the lake, which up close feels like a sea, down to its steely immensity, sky-rimmed horizon (except on certain days, when points on the Michigan shoreline are visible) and the seabirds that gather on the docks and pilings and benches. Today, there were lots of gulls, and, though I've seen it numerous times, vast coats of snow and ice atop the sand. Since I still tend to associate beaches with summertime (unless I'm in the tropical place), it surprises me when I see a thick white crust atop the undulating sandy mounds. The snow does disappear the closer you get to the lakewater. I snapped a few pictures and then hurried back to the car before I froze, but the sight and sound of the water had its relaxing effect, as always. 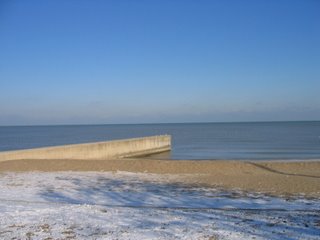 The lake, a pier, and the snow-covered sand. 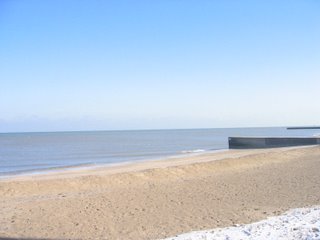 A lake view south towards the Chicago Loop 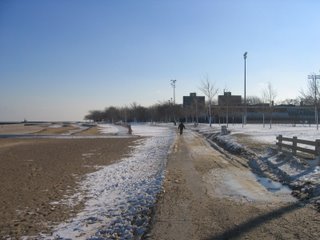 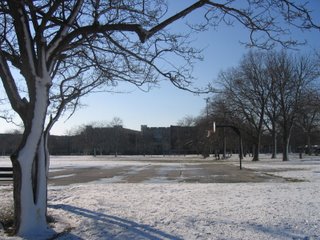 One of the park courts, and Rogers Park's stolid buildings in the background

Worst Supreme Court Ever
Yes, that's hyperbole; there have been worse ones, such as the one under Roger "Dred Scott Decision" Taney, to give one example. The new right-wing majority on the court, however, was created by the Worst President Ever, an sobriquet for the Resident I began using a while ago, along with Warrantless Wiretapper (all but forgotten, like everything else he's had a hand in) and Emperor Katrina, and now the Washington Post, sometimes his court paper, has decided to come to its senses and validate this view in its Outlook section. Mostly. (He's competing against the likes of Richard Nixon, Herbert Hoover, Warren Harding, Millard Fillmore, James Madison, James Buchanan....) But that wasn't the aim of this entry; instead, I wanted to call attention to one of the effects of this horrible new court he's created, led by the genteel and nauseatingly ultraconservative John Roberts Jr. It's strongly considering helping to reinstitute segregation in public secondary schools. De facto, that is--but segregation nevertheless. Today's arguments before the Roberts court looked very bad for proponents of racially distributive school assignment plans to integrate students in districts in Louisville and Seattle. As the New York Times's Linda Greenhouse describes it, the question is not whether the plans will be overturned, but how far will the justices go. She described the new court's scrutiny of the integration plans as "hostile" and moderate-to-liberal justices as "visibly dispirited" by the line of questioning. For the conservatives, as I read Greenhouse, any accounting for race in the distribution decision-making to achieve racial integration was equated with segregation, though that would be the likely effect if the plans were struck down. This decision, if it turns out as Greenhouse augurs, is sure to be one of more than a few notorious ones with Worst President Ever's death-tainted fingerprints all over it. If there is any motivation to keep the likes of John McCain, Rudy Giuliani, or some of the other Republican wannabes the media is slavering over out of the White House, let me utter one name: John Paul Stevens. Right now, the court has a quasi-swing vote in right-winger Anthony Kennedy, who is hostile to some progressive or liberal views but not others. With another far right authoritarian type of the Thomas-Scalia (who mocked global warming last week)-Roberts-Alito stripe on the highest court, Kennedy's views would be superfluous either way. We cannot let this happen, especially now that Worst President Ever spirals ever deeper into dystopian fantasies of his continued relevance. He, like many in the Republican Party (cf. second in command Trent Lott) has shown that he is going to be even more recalcitrant, truculent and dangerous, despite the national rebuke of his administration and its policies, especially regarding Iraqmire and the disintegrating situation across the Middle East.

I'm very much an anti-hype person, but I've been totally sucked in by the Dreamgirls pre-release press. I can't wait to see it, both because the original is one of my favorite musicals (I even found a way to weave Jennifer Holiday, singing one of the musical's anthems, into a poem), but also because I want to see how well this new cast animates the story on the screen. (At right, Annika Noni Rose, Beyoncé Knowles, and Jennifer Hudson, from couturecandy.com.) Oscar winner Jamie Foxx, Eddie Murphy, and chanteuse Jennifer Hudson are all receiving acclaim for their performances, but the supernova among them is the 25-year-old R&B babydiva, Beyoncé Knowles, who plays the Diana Ross-esque part she'd already assumed in real life with her now-defunct group Destiny's Child. I'm not a Beyoncéphile nor one of the constant critics of her style/voice/relationship/etc., but I've enjoyed her singing since Destiny's Child's début, including her first solo effort. The songs I began to hear from B'Day, the newest one, however, didn't really grab my interest, so I while I would catch some of the tracks on the radio, I didn't download any of them. The one day last week I was reading the New York Times, and came across Kelefa Sanneh's review of Beyoncé's new CD. His praise-tinged analysis of her song "Irreplaceable," which I hadn't heard, got me to check it out. And I disliked it, to put it mildly--and right after that it popped up every time I landed on a video channel or show on TV. Today I came across the brilliant Daphne Brooks's reading and historicizing of Beyoncé's B'Day, entitled "Suga Mama, Politicized," in the new Nation, and I found it so well-written and provocative that I just may give the CD another chance. Well, all of it except for "Irreplaceable."

Hugo Chávez coasts to reelection as Venezuela's president, loved by the poor because of his socialist revolution, despised by the middle and wealthy classes (and the US administration) because of his socialist revolution • Fiji has suffered its 4th military coup in the last 20 years, and Australia has sent warships but will not intervene - Four US servicepersons are killed when a military plane crashes in Anbar Province in Iraq, while over 70 bodies were found in Baghdad and other cities • Ethnic cleansing and de facto partitioning is occurring apace in Iraq despite rhetoric to the contrary • More than 1,000 people are thought dead in the aftermath of the Phillipines typhoon • A US Marine is sentenced to 40 years for rape in the Phillipines • Gay unions near 16,000 in the UK • Bill Clinton becomes an honorary chief in Papua New Guinea as he helps to battle AIDS there
Posted by John K at 8:29 PM