Grades are in, and now it's letters of recommendation time, a few more graduate projects to read, and final preparations for the new quarter, which begins January 3. Yes, you read that correctly. A swift little break this will be...half of it spent at the library! 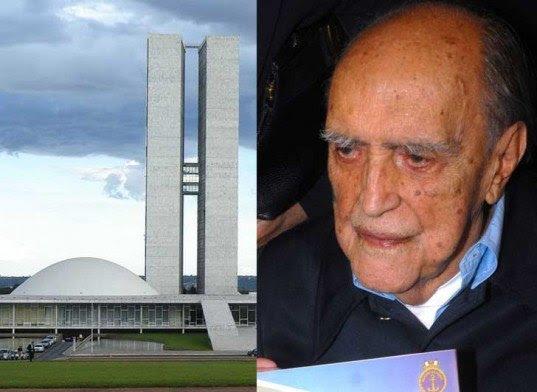 There are octogenarians among us who continue to create, nonagenarians still at their art, and, believe it or not, centenarians too who are practicing their craft. One is the Brazilian architect and political activist Oscar Niemeyer, who turns 104 years old today. Perhaps most famous for his now iconic buildings for the new, mid-century Brazilian capital of Brasília, Niemeyer has continued to draw upon his inner visions to create buildings of note, transforming metaphors and images into unforgettable structures. One of the 20th century's pioneers in reinforced concrete structures, Niemeyer designed his first building, the Education Ministry in Brazil's then-capital, Rio de Janeiro, in 1936, creating what was reportedly the first state-sponsored modernist skyscraper in the world. The building debuted in 1943.

As this building was underway, Niemeyer met Juscelino Kubitschek, then mayor of Brazil's fourth largest city, Belo Horizonte, the capital of Minas Gerais state. This personal connection would would prove fruitful several times over. At the behest of Kubitschek and Minas Gerais's governor, Benito Valadares, Niemeyer designed Pampulha, a suburb of Belo Horizonte, whose striking complex, completed in 1943, included a church, São Francisco de Assis, which the church authorities would not consecrate until 1959 because of its form and the imagery in it.  Later, when Kubitschek became president of Brazil in 1956, he immediately called upon Niemeyer to help him design a new capital in the country's interior. Niemeyer's former employer, Lúcio Costa, created the plan, and Niemeyer the buildings, and thus was the core of what is now one of the most famous world capitals launched. Even today, over half a century later, Niemeyer's buildings in Brasília, the Presidential residence (Palácio da Alvorada), the House of the Deputies, the National Congress of Brazil, and the Cathedral of Brasília, among others, have not lost an iota of their unique beauty or capacity to arrest the eye and mind.


Among Niemeyer's many other buildings notable creations are the Headquarters of the United Nations, designed collaborative with one of his epigones, Le Corbusier (1947); São Paulo's Ibirapuera Park, which commemorated that city's 400th anniversary (1951); the French Communist Party seat in Paris; the headquarters of Mondadori, the Italian publisher, in Milan; and, in Brazil, two of the most eye-catching of buildings of the last 40 years: the space-ship like Museum of Contemporary Art in Niterói, the former state capital that sits across Guanabara Bay from Rio de Janeiro, and the hovering eye that is the Oscar Niemeyer Complex in Curitiba, Paraná State. Niemeyer designed the Niterói museum at the age of 89, in 1996, and the Niemeyer Complex in Curitiba in 95. In Brasília, he also designed a tribute to the city's founder, the Memorial Juscelino Kubitschek, in 1980. In 1988, he received the highest international prize for architecture, the Pritzker Architecture Prize, becoming the second Latin American (after Luís Barragán, of Mexico, in 1980) and first Brazilian (Paulo Mendes da Rocha followed in 2006) to be so honored.

One of Niemeyer's most recent designs, the Óscar Niemeyer International Cultural Center (or Centro Niemeyer) in Avilés, Asturias, Spain, opened 9 months ago to national and international acclaim, but is shutting down, temporarily one hopes, and will remove Niemeyer's name after an ongoing brouhaha between the new conservative government and the art center's administrators, who are accused of having misspent public funds. Whatever happens with the arts complex, it's clear that as long as he's breathing Niemeyer will keep designing, and I look forward to marking his 105th birthday next year.
Posted by John K at 10:49 PM