1/2 US Near Destitution + Acemoglu on Inequality

I don't spend much time in the precincts of the 1%, so it was no surprise to me to read back in the New York Times back in November that according the US Census figures, in 2010, 1 in 3 Americans, or around 100 million Americans, adults and children, were economically just above or already below the poverty line. The Times article focused on how an alternative measure of the US economic situation that adjusted for cost of living and included government benefits and income lost to taxes, health care and work expenses showed 17% now falling into the "near poor" category, as opposed to the 10% that the official government measures had identified (cf. the US Census Bureau). For these Americans, only a gossamer barrier--a paycheck or two, ill health, a shock of any sort--is keeping them from outright destitution. 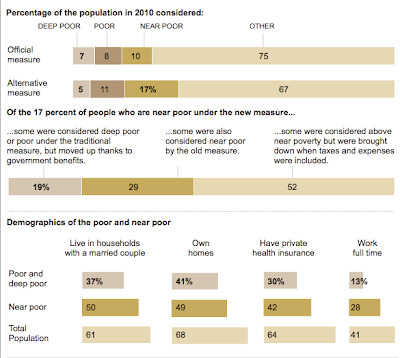 Recent figures, however, suggest the situation is even more dire. NPR reported on Thursday that new measures of poverty, which account for "medical, commuting and other living costs" have pushed the number of those living in the near-poor to deep poor range to 146.4 million, or 48% per cent of the US population. To put it another way, nearly half the US population is right up against or in economic destitution, and despite the official economic indicators, which point to slow, modest economic growth and private job creation, half the country is still staggering through the Great Recession. As both the earlier and the current figures make clear, were it not for governmental programs, more people would be in the poor and deep-poor categories; even with them, millions of Americans are barely keeping food in their and their children's stomachs, roofs over their heads, gas in their cars or change in their pockets for public transportation.

These figures underline the fact that despite the White House's and Congress's conservative shift towards deficit reduction, the most pressing national and global problem is the economy, and a key element of the US's economic problems continues to be the unemployment crisis, especially for those trapped in long-term joblessness.  Persistent joblessness and underemployment are exacting a severe toll on Americans, especially children and people of color.  As the NPR segment notes, these dreadful economic figures represent as clear a picture as one might envision of the shrinking middle class. 30 years of wage stagnation for most working people, coupled with the 2008 global financial and economic crash, and the resultant Great Depression, have devastated the fortunes of a sizable chunk of America.  I would venture too that though the figure say little about those who are doing somewhat better, for many millions more out there making ends meet is more difficult than it has ever been.

The wage stagnation since 1980 for most workers, along with other factors including regressive federal individual and corporate taxation, job outsourcing, technological and structural changes, and the increased focus on short-term profits and rising stock prices, have led to the widening US income and wealth inequality gaps that the Occupy Together protests have brought to national and international attention. Yet I still do not see any move by those with the power to rectify things doing so. Instead, from the President and too many Democrats we get defensible but unimaginative plans that are watered down to nothing through "compromise," or as bad, "Grand Bargain" policies that will not address the problematic status quo; from the GOP we get intransigence and policies, when economically feasible at all, that will wreak even more social havoc.  One of the major aspects of the current economic crisis, the housing debacle, is still getting too little attention from

All over Europe, too, the Left has been supine, while conservatives have implemented policies that are bringing the Eurozone and individual economies, like the UK's, to the brink.  The push for fiscal austerity has been a shove towards contraction wherever it has been tried.  In Britain, Labour's leader, David Milliband, instead of challenging the demonstrated fiscal ineffectiveness of David Cameron's Conservative-Liberal Democratic coalition government's policies, offers only a tepid counterargument.

Yet it's not like other plans are nonexistent. There is The People's Budget, a truly progressive short-and-long-term plan that runs counter to the approaches of both major parties, as well as self-described "centrists" and their establishment media enablers, but it can barely get a hearing. Occupy Together protests are right to stay away from electoral politics, but if they can--if we, and we must--press a hearing on options other than the awful ones we have endlessly dangled before us, options like the People's Budget, and elect representatives to enact while also changing the structure of the system, as Senator Bernie Sanders is urging with his Constitutional Amendment to end corporate personhood, we will be on the road to preventing some of the most serious problems we now face.

Daron Acemoglu, who won the American Economics Association's 2005 John Bates Clark Medal for the top economist under 40. and who is now the Elizabeth and James Killian Professor of Economics at MIT, recently participated in an interview, featured on the The Browser's website, in which he discusses US and global economic inequality.  The interview itself is too brief to provide much insight on the topic, but far more enlightening are what follow the interview questions: his recommendations and concise discussions of five books on inequality, each of which takes on a different facet of the topic.  Alongside Paul Krugman's New York Times blog and columns, and the discussions of the topic I've found in online posts by Dean Baker, Brad DeLong, and Felix Salmon, among others, it fills in some useful gaps.

A snippet of the interview:

In terms of the actual figures, how bad is inequality in the US and, say, the UK?

Based on the work of Thomas Piketty and Emmanuel Saez, if you look from the 1950s up to the end of the 1970s, the share of total national income in the US earned by the richest 1% was about 10%. If you look at the 2000s, it’s well over 20%. It rose up to nearly 25% and then came down. In the UK it’s at about 15%, up from 7% or so. The trend towards inequality over the last 50 years has been very similar in the Anglo-Saxon economies, though it’s important to say that it’s not just an Anglo-Saxon phenomenon. There are similar trends in many economies, though there are a few that haven’t experienced it to any notable extent.

And an excerpt of his discussion of one of the recommended books, Unequal Democracy, by Larry Bartels, a political science professors at Vanderbilt University:

I’m definitely in that camp. I do believe in markets. I passionately believe in the importance of property rights and private property. I think they are absolute sine qua nons for prosperity. But I also believe that these things are very political and the politics shouldn’t be one-sided. Gore Vidal said, “The United States has only one party – the property party. It’s the party of big corporations, the party of money. It has two right wings; one is Democrat and the other is Republican.” If that is true, that’s a real threat to a free market and a fair society. For that reason I think Occupy Wall Street is very important. It’s a grassroots movement that tries to stand up to this tendency of our political system.