The Gonzales Cantata @ The Rotunda, Philadelphia

Millions of people all over the US face very tough times right now; the unemployment ranges from the official 9.7% to the morely likely 16.4% or higher, and runs as high as 40% or more in parts of some states, like California, and in some metropolitan areas, particularly among certain groups like African American men and young people. The Obama administration and Federal Reserve chief are touting a recovery that began in August, but so far the country continues to shed jobs, though at a slower rate than before. From what I can tell, there appears to be little indication, despite the helpful suggestions and arguments of labor advocates and workers themselves, employed and unemployed, economists, and others, that those in charge are taking the longer-term issues of labor in this country to heart, except in an abstract sense. The financial industry and multinational corporations appear to be the chief concern of the nation's economic leaders, and our mainstream corporate media. We heard a lot of airy rhetoric about "Main Street," as tiresome a cliche as there is, during the campaign season and again early in the year, but Wall Street continues to hog all the air--and money--in the room, and the neoliberal agenda among the Democrats, and a corporatist right-wing agenda among the GOP, continues unabated. Perhaps one thing to do today is think about the present state of working people, especially working-class and poor people, in this country and globally, and consider ways that you can help to refocus the discussion to ensure that this country and its industries creating viable and sustainable jobs here, but also helping to create conditions for viable and sustainable jobs elsewhere.

Yesterday we dipped down to the City of Brotherly Love to see Melissa Dunphy's The Gonzales Cantata. As longtime fans of J's Theater know, I'm fond of operas and orchestral music, particularly anything written from the late 19th Century forward, and I'm also a political junkie, so I was very happy when C suggested we check out this piece, which we first learned about from the invaluable Rachel Maddow Show. The Gonzales Cantata, part of the Philly Fringe and Live Arts Festivals, ran for three shows at The Rotunda, a crumbling but beautiful former Christian Science church (meeting house?) and now contemporary performance space designed by the famous early 20th century Beaux Arts architects Hastings and Carrère (architects of my beloved New York Public Library Research Branch, at Bryant Park), on (the edge of) the University of Pennsylvania's campus. I hadn't been to Philadelphia since I gave a reading a few years ago, and hadn't been on Penn's campus since a friend lived right near it a lifetime ago, so I really relished the quick trip from Jersey City.

According to the press materials, Australian native Dunphy quite inventively conceived of the cantata after watching the exasperating (my word) US attorneys firing scandal hearings on TV. How often have you watched our crazy political dramas and thought to yourself, I'm basically watching a (soap) opera? Dunphy did, and then pulled it off. (Hint: someone ought to consider the Blago story as grist for a musical drama of some sort.) She used truncated versions of the hearings transcripts and Gonzales's resignation speech to create her libretto, and then set the words to music that incorporate baroque, classical, Romantic and modernist, but overall tonal, traditions. While the piece did lack narrative drama and drive, its ending already known and its "story" an extended ellipsis whose true backstory remains greatly unknown to us even 2 years later, Dunphy more than made up for it through her confident, charged composition and orchestration, her pragmatic inventiveness in the cantata's construction, and the work's frequent wittiness and use of irony. Since most of the Senators grilling Gonzales were men, Dunphy reversed the performers' genders, so all of the individual male roles, and most of those in the chorus, were sung by women and vice versa. In addition, to highlight the preening quality of the politicians, all of them appeared as sashed pageant contestants, the male Senators in gowns and elegant dresses, crowned with tiaras, the female one (Feinstein), in quasi-white tie. None of the Senators were singled out, at least by Dunphy, for ridicule, their words being enough of an indictment, but the character of Gonzales was structured so as to emphasize the combination of absurdity, idiocy and criminality he embodied during his Attorney General tenure.

One of the highlights of the piece was Dunphy's playful incorporation Gonzales's repetition, 72 times during the original hearings, of "I can't recall" to the Senators' questions about the attorney firings. She also juxtaposed his repeated contradictions of his having been in control and not in control of the firings, and she managed to rekindle real outrage when the chorus recited only a portion of the Bush administration's crimes, including the widespread use of torture and illegal spying on Americans, in which Gonzales played a central role. I personally began asking about halfway through the hour-long piece why Gonzales was not in jail, which provoked a bigger question I think we can never ask enough: why aren't numerous members of the previous administration at the very least on trial, either here in the US, or at the International Criminal Courts, in the Hague.

My abilities to assess voice quality are minimal, but I found most of the individual singers, as well as the chorus, vocally gifted and assured. The young women singing the Gonzales and Senator Pat Leahy parts, and the young man who sang as Feinstein, had pipes. Dunphy conducted a small orchestra of strings and harpsichord, a clever, baroque touch, very deftly, managing to wring an immersive, often dramatic and thrilling soundscape from a tiny ensemble. One of my favorite moments was just before the Senatorial chorus lodges its complaints against Gonzales, and Dunphy switched from a Bachian mood, which in a few spots perhaps didn't work to the best advantage of the piece, beautiful as the music was, to something evoking a Bernard Herrmann score (think Psycho). An addition treat was her orchestration of three "patriotic" songs, including the treacly, jingoistic "Let the Eagle Soar," which were sung often in near falsetto by a very talented tenor and accompanied by the harpsichord and flutes. As you might imagine, the Republican anthem was appropriately syrupy, sentimental, and yet, in its performance, astonishing at the same time. 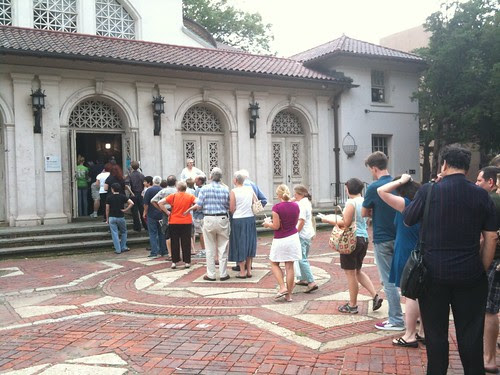 The line to enter the Rotunda 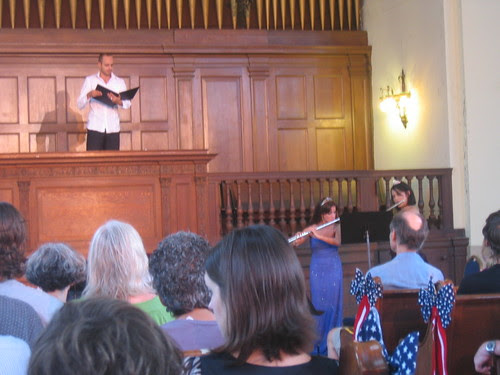 The perfomance of the patriotic songs 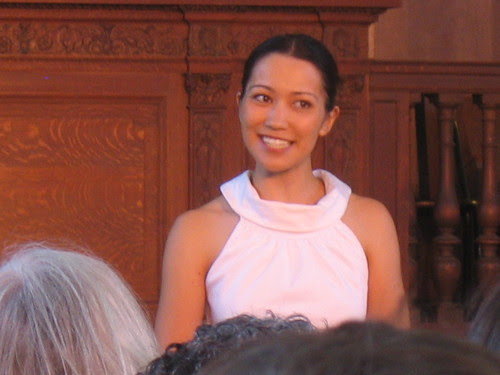 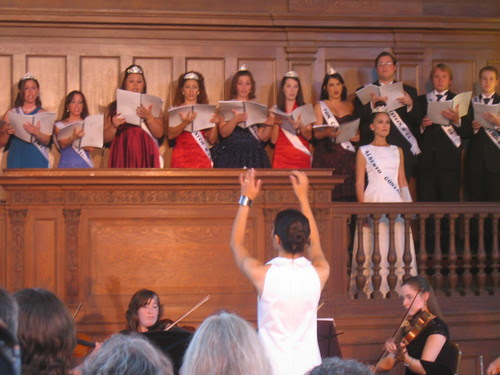 Dunphy, conducting the chorus (The singer of the Gonzales part is at the front of the lectern) 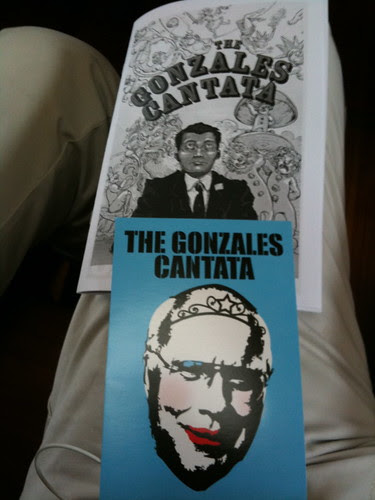 The Gonzales Cantata program and postcard 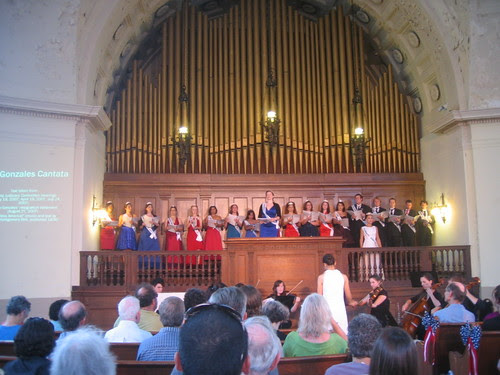 The cantata underway; Leahy stands at the lectern, opening the piece; the supertitles are visible at left; the orchestra, led by Dunphy, is in the chancel area up front 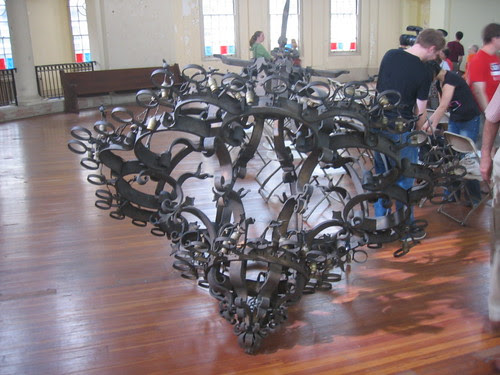 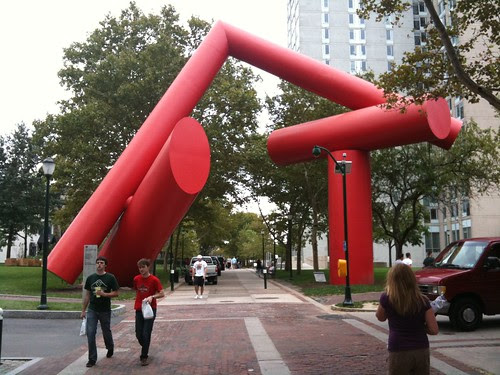 Alexander Liberman's "Covenant," on Locust Walk, University of Pennsylvania campus
Posted by John K at 11:11 AM