Last week, as I was dropping a movie off at the university library's media center to be digitized for an online class screening, I glanced up at the wall of new and current DVDs on display, and saw one I hadn't noticed or heard of before: Quilombo Country. (You can see a trailer here.) I assumed from its box that it was either a feature or documentary about the settlements, or quilombos, across northeastern and other parts of Brazil that escaped slaves, or maroons, along with renegade Portuguese, Native Americans, and mixed race people, established beginning in the late 16th and early 17th centuries, the most famous being Palmares* (1600-1694), led by Ganga Zumbi and Zumbi, west of the city of Recife. (In Spanish-speaking countries, such settlements are also known as palenques.) That was enough to make me want to check it out, but what also intrigued me most was that rapper and activist Chuck D. of Public Enemy was its narrator.

Leonard Abrams directs the engaging film, which focuses not on the widely known quilombos (from the Kimbundu [a language native to Angola] word kilombo) or macombos of northeastern Brazil (Bahia, Pernambuco, Alagoas, etc.), such as Palmares; Carlos Diegues's fine 1984 feature film Quilombo compellingly treated this particular history. Nor does it examine analogous settlements in the Southeast region (Rio, Minas Gerais, and São Paulo), which are the main venues for many of the best-known recent films set in Brazil (City of God, Madame Satã, Central Station, etc.). Instead, it looks at the ones that exist in the North Amazon region, in the states of Maranhão, and Pará, at whose capital, Belém [or Bethlehem], the mouth of the Amazon River meets the Caribbean Sea. Quilombo Country looks specifically at quilombos in Maranhão's Itapicuru-Mirim area, on giant Marajó Island at the mouth of the Amazon in Pará, and in the Trombetas region in the Amazon River basin. (The photo above, from the Quilombo Country website, shows a father and child eating manioc doughnuts in Trombetas.) As it explores each site, the film succeeds in showing how the communities have survived more than a century of economic, political, social and cultural struggle against an array of forces, beginning with the Dutch and Portuguese governments, and then with the Brazilian state and powerful regional landowners, and more recently with globalization and global capitalism with a Brazilian face. In some cases, the quilombos arose out of estates that were abandoned after the collapse of the sugar economy, in the late 18th century (this was one of the factors that led to the transfer of the national capital from Salvador da Bahia to Rio de Janeiro in 1764), yet eventually the land, though occupied and settled, became the target of land grabs for industrial or governmental uses, requiring the quilombolos (residents) to wage battle directly, sometimes by collective force, and in the courts, to retain theirs. In 1988, Brazil's post-dictatorship constitution granted ownership of the land to the residents, but the film shows how racism, indifference and structural social inequalities, in the form of incomplete schools, infrastructure projects that have bisected some of the quilombos, and industrial encroachment, continue to ensure that the quilombolos' lives aren't easy.

Although the ancestral history of the quilombolos is mixed, the African roots, at least in the setttlements Abrams profiles, predominate. This is clear in many aspects of the quilombolos' material and spiritual culture on display. In addition to the practice of Macumba and the various Carnival-style celebrations, musical forms, dances and performances, and various other kinds of retentions, in the forms of aesthetic artificacts and social practices, are central elements of the quilombolos' lives. The film also shows how strong the sense of racial pride, as Brazilians of African descent--as negros--is among the residents. (As I watched the film I also thought about a fascinating book, Blackness Without Ethnicity, by Livio Sansone, that I've been reading, which problematizes some of the understandings and uses of Blackness in certain regions of Brazil.) In the Trombetas quilombo, several of the residents describe the intense racism they faced as soon as they stepped outside the settlement. One of the terms of opprobrium was, get this, "macaca" (meaning "monkey" in Portuguese). In the Marajó quilombo, which also had a strong Native American influence, one of the men also described how he maintained traditions deriving from this heritage, including tying a ceremonial belt and sacred inscriptions that illuminate the multilayered worldview. As the residents show the abiding sense of racial and cultural pride and community in their settlements, some also make it clear that they fear losing it, along with the means to sustain themselves economically, when they leave the quilombo and go to the city. Some of the former quilombolos describe how alienated they are from their rural roots and way of life, and one young woman notes that, among her other indispensible accoutrements of modernity and urbanity, she simply could not live without her TV. The film also shows an elder lamenting the threat played by globalized Black popular culture, here in the form of reggae, which is especially popular among the young (as rock, hip hop, soul, R&B, house, and other global music forms are in other parts of Brazil).

The film emphasizes that despite the society's racism, hostility and indifference, the quilombolos' pride and joy in their history and survival is profound. In fact, Quilombo Country repeatedly underlines how independence and sovereignty, in the face of constant duress, demanded that the quilombolos develop a range of skills, from farming and hunting to construction and river navigation that the descendents have retained. The film shows a rich and vibrant material and spiritual culture. As I noted above, some of these traditions derived from the African, and especially West (Yoruba-Fon, etc.) and Southwest African (Angolan-Congolese) sociocultural traditions, yet some also developed out of contact with the Portuguese and indigenous peoples in Brazil itself. The quilombos' religious-spiritual, aesthetic and sociocultural traditions, which are thoroughly intertwined, especially interested me. Macumba, which I noted above, has survived and provides another source of sustenance for people in many of the quilombos, as have a number of popular folkloric festivals and celebrations, like the Tambor de Crioula (which a sprightly older woman dances as if she were moving on air); the Santa Filomena; and the Bumba Meu Boi, a lively Carnivalesque (and carnivalesque) performance and ritual celebration that combines African, European and Native American elements around a various legends involving a slave and a bull, since ranching was not uncommon in upper Pará. Abrams doesn't delve too deeply into Macumba, but I detected some of the complexity around issues of gender and performance in the scenes that dealt with it. 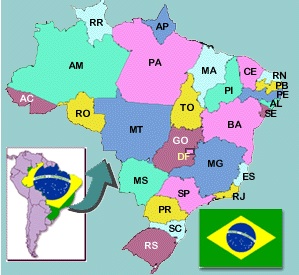 One of my few criticisms of the film is its aesthetic roughness; it's shot in digital video, and the editing is okay, but it at times it almost feels cobbled together. Chuck D's voiceover provides a great deal of background information whether you're familiar with Brazil or not--and though I am, I did learn a number of new things about these regions I knew little about--but I was curious to know more about his involvement, though, and Abrams's as well; did he accompany Abrams on the trip, who was present for the filming, and so on. On the website there's a downloadable ethnographic report on three quilombos in Maranhão, and reading them made me wish that Abrams had included a personal interview or discussion of how he came to the project on the DVD. Unfortunately, there are no DVD extras on the film or anything else for that matter, like a menu. The DVD I got from the media center starts up immediately after being popped in the DVD player or computer, so beyond fast-forwarding or rewinding, you cannot really control it at all (and our DVD player in Jersey City sent it into continuous loops). I'm not sure if this was the result of the production company or what but it could use a little bit of technical fine-tuning. Overall, I recommend it for anyone with an interest in this area of Brazilian, African Diasporic and South American histories and cultures.
___
*According to City Brazil, you can visit União dos Palmares, which is in Alagoas State, south of Pernambuco and north of Bahia, and see the Parque Nacional do Zumbi, which occupies the area where Palmares and its satellite towns were situated.
Posted by John K at 6:10 AM