Novel Days and So Much Else

National Novel-Writing Month
It's November 1, which means this is the first day of National Novel-Writing Month. It's also the first day of several other specialized months I don't recall, and to tell the truth, the idea that someone could write a novel in a month is a bit preposterous, unless you clarify that the aesthetic standard is not the best novels ever written or even the vast tide of mediocres churned out but the lowest common denominator, which very well could be penned in one month. That is to say, the novel need not be 1) complete, 2) more than a first draft, 3) very good, 4) good, 5) even mediocre, and 6) a novel. I keep reading "50,000" words or "175" pages bandied about as if the length of a work of prose fiction alone determines the genre, but it might be fair to say that at 50,000 words you no longer have even a long, long short story ("The Dead") or a novella ("Seize the Day"), even if what results isn't really, well, a novel. I guess someone'll have to think up a name based solely on length.

William Faulkner did supposedly write The Sound and the Fury, one of the greatest novels in the English language, in a very short time, but it took more than 4 weeks, I believe (16 might be more like it); Barbara Cartland, on the other hand, wrote countless novels (perhaps the number exceeds several hundred) very quickly, even breaking a record by writing 24 in one year, and they did bring many people (I think the number is 1 billion) great pleasure, but as for their quality.... Speed, it strikes me, is a necessity with this project, as is a preexistinng idea; most decent novelists have tended to let the ideas for their books steep for at least a good moment, and of course anyone familiar with most novels since the days of Miguel de Cervantes, François Rabelais, or, moving forward a bit, to England's Samuel Richardson, is aware that they often change in revision, sometimes radically--and sometimes over many, many revisions. My former student Francisco Mejia is a verrrrrry fast writer. He works at almost Joyce Carol Oatesian speed. But I think a month may be even too swift for him....

At any rate, the idea is an interesting and provocative one. At the university we ask our upper-level undergraduates to write a novella in about 5 months (1/2 the winter quarter and all of the spring one), which leads to great anxiety, many lost nights for the professor and students, and some wonderful pieces by the end of the year (or at least good starts), and certainly it's possible to write a novel in less time than it took James Joyce with Ulysses (yet again another of the greatest novels in the English language, requiring 17 years, which show in every line), but...one month! Well--let's say a first draft or much of a draft. That I can see. Maybe I'll try it. If anyone is game, keep J's Theater posted. And get cracking!

PS: Maybe a quick, painless November-written novel to go along with the right Jimmy Choo shoes, closet full of spring 2007 Prada suits, new Mercedes SUV, and McMansion in that gated community in the ex-ex-urbs! The commodity society wins out every time! 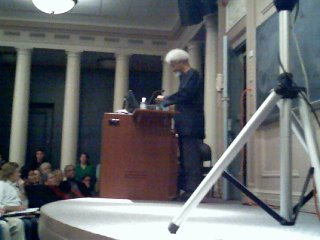 When I was in college, I went through a mild literary obsession with Wole Soyinka (at left, tonight, cellphone pic). I'd happened upon Chinua Achebe's Things Fall Apart (which many universities and even high schools now teach, though I wasn't so fortunate to get that kind of institutionalized introduction), and the poetry of Christopher Okigbo (who died in the Biafran War and whose poetry seemed so elusive and exquisite and hopeful and tragic that I wanted to mimic it), and that jumpstarted an interest in anything written by anyone from Nigeria. In those pre-Google days, I went and searched the library shelves and card catalogues, and one of the first names that popped up was Wole Soyinka. I am trying to remember what of his I read first; I think it was the poems in A Shuttle in the Crypt, because I concretely recall thinking about them (elusive and exquisite and not very hopeful but not tragic either) when he was named the 1986 Nobel Laureate. He had written them during his imprisonment during the Biafran War, and yet again, I wanted to mimic them but realized fairly quickly that I lacked not only his linguistic gifts but the context in which they were written. After he received the Nobel Prize, many of his books went into print, and I ended up reading most of the poetry I could get my hands on, his novel The Interpreters, and many of his nonfiction books, like the memoir Aké and his study of African mythology and its relation to African societies. I didn't read any of his plays until sometime later (the mid 1990s), but the spell cast by those poems (which interestingly enough my former classmate and old friend Ngozi Ola's work was deeply in dialogue with) has never fully subsided. I had the opportunity to use some of his theorizations of myth in the first literature class I taught, and I periodically dip into his poetry for inspiration and to remind myself of what I have considered to be a standard.

As part of this fall's One Book One University program, which is focusing on Shakespeare's Othello, Soyinka gave a talk on "Othello's Dominion, the Immigrant's Domain," this evening. I got to speak with him briefly before his peroration, which drew a line from Othello's strange status in Venice through to the United States's protestations of its dis-ease in the world and its ongoing cry of why does the rest of the world dislike us so, touching upon a range of issues, including his own immigration in the 1950s to Britain to study at Oxford and his status as one of the "Princes of Exotica," which changed several years later as waves ("boatloads") of Caribbean immigrants arrived to work in the United Kingdom's factories and rebuild its economy. I saw him calling into question the simple reading of Othello as an assimilationist who ends up being duped; he wanted to show how cut off, isolated, family-less and denatured, defamiliarized, that is, Othello was, and how the violence he enacted were not crimes as we know them, but operating in contexts that are unknown to us today and yet, as in the case of honor crimes across the globe, and the radical alienation of the self resulting in murder and suicide, horrifyingly comprehensible. At least that's what I think I heard, but my immediate thought at the end was that the talk was inspired and enlightening, and that I wanted to read it slowly to grasp all that was in it. Part of the time I was marveling at his sheer performance of the self--his white picked-out afro and goattee, his trim profile, his immaculate buba, his rich, resonant voice. Given the technical glitches preceding the event, I doubt that it was captured on tape and I didn't bring my trusty DAT recorder, but perhaps someone else did record it, and they'll put this and the other Othello events, including a discussion of Tayeb Salih's Season of Migration to the North, featuring three colleagues, Nasrin Qader, Christine Froula and Evan Mwangi, that I introduced the other night, in book or audio form.

Kerry's Gaffe, 5 Questions for the Iraq-mire Gang
The media is in a state of total testeria about John Kerry's gaffe (at least so say the blogs), but then again, he was the (lackluster) Democratic presidential candidate in 2004, he always knows how to put his patrician foot in his platinum shovel-shaped mouth, and the Republican echo-braying machine has gotten whipped up into yet another lather of sanctimony, so of course the mainstream media follow along like the dazed sheeple they are. But here are five questions I'd like one of these media bobbleheads to ask Bush, Cheney, Rumsfeld, or any of their surrogates leading up to the elections next Tuesday. All five are very simple, and let's see if we get a straight answer, outrage, sanctimony, people whipped up into a Hitl...you get my drift.

Clifford Geertz RIP
Clifford Geertz, one of the most important, legendary figures in the field of anthropology, and a central giant in 20th century social sciences, the humanities and American intellectual life, just passed away, at 80. Here's the obituary from the Institute for Advanced Studies, in Princeton, New Jersey, where'd he conducted research (they don't exactly "teach" there) for many years.

Post-Traumatic Stress Syndrome Affecting Abandoned New Orleans Teens
I have many thoughts on Adam Nossiter's New York Times story on some of the struggling teenagers of New Orleans, many of whom are raising themselves, but rather than take a week to comment, I'll post the link and welcome any responses.

Damian Maurice (Saunders) Exhibit in DC
Recently I received a flyer for painter Damian Maurice Saunders' new show, which is going up soon in Washington, DC. If you're in town, it looks like it'll be a show to catch. 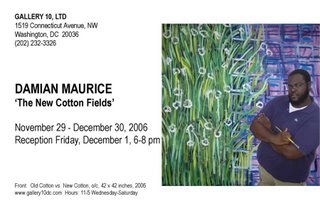