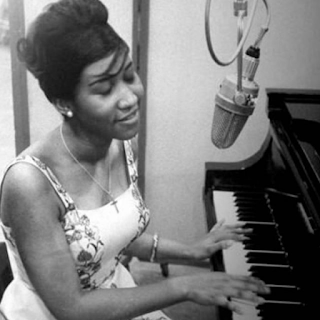 Though I knew she had been ill for some time, it was still a shock to hear that Aretha Franklin (1942-2018) had moved to hospice care earlier this week and that yesterday, she passed away in Detroit. One of the greatest, most vocally gifted and agile singers of her generation or any other, with a rich, layered mezzo-soprano voice that could project with tremendous power and draw emotion out of each note, she set the standard for her peers and all who followed her, earning the title of the Queen of Soul in 1964. But as she proved throughout her career, in addition to possessing major talent as a pianist, she also could sing gospel, the musical genre she grew up hearing and learning in the church, New Bethel Baptist, led by her legendary father, Rev. C. L. Franklin; R&B, in which she became a superstar; pop, leading to her early fame; the blues, which suffused all of her music; rock & roll, as she proved in the 1970s; jazz; and even classical operatic music, as she demonstrated to the world (though close friends like Grace Bumbry knew it) when she stepped in for Luciano Pavarotti on national TV and sang "Nessun Dorma" at the 1998 Grammys.

A path blazer as a woman in the music industry who at age 12 joined her father on his "gospel caravan" tour, Franklin also received acclaim as a strong supporter of the US Civil Rights Movement and of Rev. Dr. Martin Luther King, Jr., joining him on tour when she was 16, and singing at his funeral after his assassination in 1968. She attempted to post bond for Angela Davis after her arrest, and remained an ardent supporter of the Black fight for civil rights and equality, not just in the US but in South Africa and across the globe. After moving back to Detroit to take care of her ailing father, who had been shot twice at point blank in his home, she kept the city as her chief residence, supporting local artists and its communities through her philanthropy. LGBTQ equality was among the many other causes Franklin championed. (This summary only scratches the surface of her life, which included considerable challenges from childhood on through her final illness.)

Her catalogue includes over 40 studio-produced albums, twenty Billboard Number 1 singles, beginning with "I Never Loved a Man (The Way I Love You)" in 1967 through "Freeway of Love" in 1985, and countless awards and honors, including 17 Grammys in categories ranging from Best Female R&B Performance to Best Soul Gospel Performance to Best Traditional R&B performance; Grammys Legend, Lifetime Achievement and MusiCares Person of the Year awards; American Music Awards; NAACP Image Awards; Kennedy Center Honors (she was the youngest person to receive the award when honored in 1994); the first woman inducted into the Rock & Roll Hall of Fame, in 1987; induction into the Rhythm & Blues Music Hall of Fame and GMA Gospel Music Hall of Fame; and a 1981 star on the Hollywood Walk of Fame. I would be remiss if I did not mention her brief but unforgettable turn in the iconic 1980 movie The Blues Brothers, in which she sang "Think," which won her a whole new slew of younger fans. Though she has now left the mortal plane, her music, perennial and enduring in its beauty and power, will always be with us as testimony to her greatness.

Here are some videos of Aretha Franklin performing some of her countless hits. May she rest in peace and sing on in the great beyond.

Luther Vandross & Aretha Franklin - A house is not a home (live)