One of the joys of the internet, and of Twitter--horrible social media platform though it sometimes can be--is the serendipity of coming across positive public notes and links, among them responses others might have to your work and you that you might otherwise not see. I appreciate these especially at a time when letters and even emails are less common than they once were. (I have never received many letters from readers, positive or negative, let alone emails, concerning my work, at least without something else being involved, like an invitation to read or a request for a blurb.)

The other day, after signing on to Twitter, I saw that I had about 8 notifications, and once I clicked on the button, I saw the following post, by the great Irish author Keith Ridgway, whose Hawthorn & Child (New Directions, 2013) I thought was one of the best and most original novels of that year. It is an anti-detective novel in the best way, and exquisitely written, with sections of such striking strangeness I had to read them again. For whatever reason--its freshness? its queerness?--it did not receive the attention it deserved when it appeared. (Perhaps some forward-thinking British director will make it into a feature film, with David Oyelowo, David Gyasi, Daniel Kaluuya, Ashley Walters, Aml Ameen, Gary Carr, David Ajala, or Jimmy Akingbola, to name just a few the talented British actors out there, starring as the eponymous Child, and Max Rhyser, Simon Woods, Jeremy Sheffield, Kieron Richardson, or Andrew Hayden-Smith, to name some of their counterparts, as Hawthorn.) 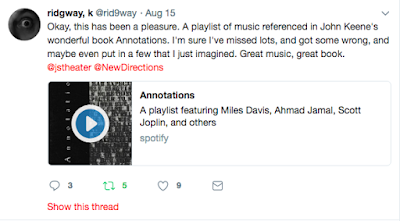 Scrolling through the thread, I saw he'd posed a prior question:

As he realized, no one had recently--I seem to recall someone doing many moons ago, perhaps in the mid-00s?--so he compiled one himself, on Spotify, the streaming music service I have to admit to having never signed up for. (I only signed up for Last.fm among the more recent streaming services, and, some years back, Naxos, which basically streams album clips of classical European and American art music with some jazz.) He culled most of the musical references, and this is the marvelous playlist he came up with: 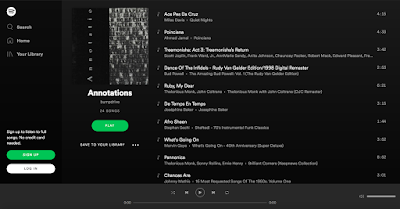 You can access it here even if you aren't signed up for Spotify.

Keith Ridgway expertly includes references from the direct mentions of standards, like Ahmad Jamal's "Poinciana" and Thelonious Monk's "Pannonica" to more subtle ones like "Afro Sheen," which is both the hair product and a song, as he shows, by Stephen Sechi. Another reference he susses out is "Dance of the Infidels," by Bud Powell, and he selects Josephine Baker's stirring "De Temps En Temps" in response to a reference to Baker in the text. (She was a native St. Louisan.)

There are some not on the list, like John Coltrane's "Naima," though "Ruby, My Dear" is here, and the R&B references, to Marvin Gaye and The Stylistics, are also in the mix alongside all the jazz. Reading his list and listening to the snippets was almost surreal, as it carried me back to my father's immense record collection when I was growing up in the late 1960s and throughout the 1970s and early 1980s, the exact time span of Annotations. It also gives deeper insight into the sound- and cultural world of the novel-memoir, and for that, I offer my deepest thanks to Keith Ridgway, and urge Spotifiers to check it out!
Posted by John K at 3:40 PM