In 1954, Alain Leroy Locke (b. 1885), one of the chief intellectual forebears and anchors of the Harlem Renaissance, an important theoretician of philosophical pragmatism, and the author who coined the term "New Negro," which was the title of his landmark, eponymous anthology and essay, announcing the arrival of a new artistic, social and cultural movement, died in New York City. For many decades Locke had been Professor and Chair of Philosophy at Howard University, from which he was temporarily dismissed for three years in the 1920s, before being reinstated, for teaching a course on race relations. It was at Howard that he taught Toni Morrison and many other major African American artists and other cultural and political figures.

A native of Philadelphia, Locke had graduated from Harvard College with highest honors and been elected to Phi Beta Kappa, and in 1907 became the first African American recipient of a Rhodes Scholarship, allowing him to study at University of Oxford's Hertford College, after which he studied at the University of Berlin, before returning to Harvard to receive his Ph.D. in philosophy in 1918. All of the important figures in the Harlem Renaissance knew and interacted with Locke; for some, like Langston Hughes, who would study at Howard in part through Locke's urging, he played a key role in cultivating their intellectual development. Like a number of his fellow Harlem Renaissance peers, Locke was also gay, though this was not widely known beyond his close associates and other Harlem Renaissance figures until after his death.

Despite his stature, upon his death and after his cremation, his ashes were not interred anywhere, but passed into the custody of his estate executor, dear friend and fellow educator, Arthur Huff Fauset, half-brother of Harlem Renaissance author Jesse Redmon Fauset. After Fauset's death in 1983, his 91-year-old niece, Conchita Porter Morison, received the cremated remains and she contacted her friend, Sadie Mitchell, who also knew Locke and Arthur Fauset. Mitchell would serve as an "intermediary" with Locke's longtime employer to secure a place for the late philosopher's remains. When Howard coordinator of music history J. Weldon Norris traveled to Philadelphia in the mid-1990s, Mitchell passed on the ashes to him. From Norris the remains went to Howard's renowned archives, the Moorland Spingarn Research Center, where Locke's papers are stored, and then on to the W. Montague Cobb Research Laboratory, where they were repackaged in a simple urn and placed in a locked safe by then director Mark Mack. 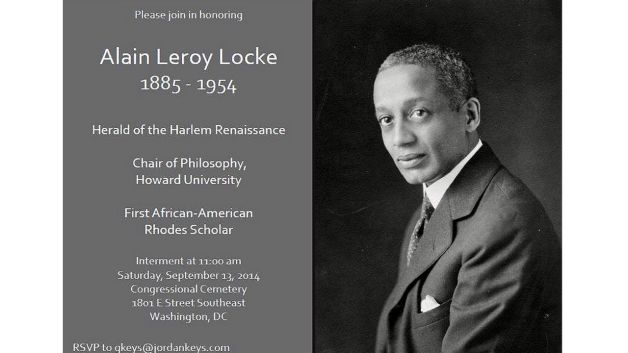 Finally, as Frances Stead Sellers reported in a Washington Post article on September 12, Locke's ashes were buried in Capitol Hill Congressional Cemetery, in a September 13 ceremony funded by African-American Rhodes Scholars, of whom there are over six dozen now. This tribute and proper memorial, with an engraved granite headstone, arose during planning by the Association of American Rhodes Scholars, in conjunction with Howard, for a symposium to honor the centenary of Locke's Rhodes Scholarship. In the process of conceiving the symposium, the Association learned of the status and location of Locke's remains, and through the financial support of Black Rhodes Scholars, he is now properly laid to rest.

According to Stead Seller's article, his headstone appears as follows:


Alain Leroy Locke, it reads, 1885-1954: “Herald of the Harlem Renaissance, Exponent of Cultural Pluralism.” On the reverse side are four symbols: a nine-pointed Baha’i star representing the religion that emphasizes the spiritual unity of humankind; a Zimbabwe bird, the emblem of the African country formerly called Rhodesia, which the American Rhodes community adopted; a lambda, symbolizing gay and lesbian rights; and Phi Beta Sigma, the fraternity Locke joined at Howard.


Some years ago, I wrote a short poem for Locke that I've never published, but in his honor, I'm posting it here. He was, as the Washington Post article notes, and as Toni Morrison described in her public conversation with Ishmael Reed at Margaret and Quincy Troupe's Harlem Arts Salon last year, utterly "fastidious,"  so I hope the poem possesses some of the spirit of his rigor too. He was an extraordinary figure, one of so many of his time and era, who have made so much that followed him possible, in this country and beyond. I thus share with you "Alain Locke at Stoughton Hall" (Stoughton is one of the freshman dorms at Harvard, Sever is the home of Harvard's philosophy department, William Henry Lewis was one the college's first and black football stars, William Monroe Trotter one of its famous black activist alumni. Du Bois needs no introduction).