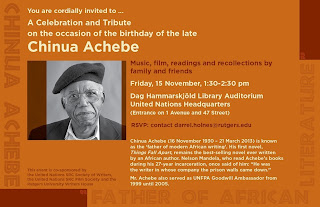 It doesn't seem as if it has been that long since Chinua Achebe passed away, but March 21, 2013 was nearly a year ago. I had planned a little tribute on here to Achebe, one of the leading lights of contemporary Nigerian, African, Anglophone, and global letters, but such are the best-made plans during a steamroller of a semester. I believe there have been various tributes to Achebe in and around New York City, but I was not able to make one until recently. Thanks to talented poet and fellow Rutgers educator Darrel Alejandro Holnes, however, I finally did get to experience a loving, public tribute to Achebe the writer, thinker, visionary, and advocate for peace. Representing event co-sponsor Rutgers University Writers House, Darrel, along with Bhikshuni Weisbrot, President of the United Nations SRC Society of Writers, which also co-sponsored the event with the United Nations SRC Film Society, offered a warm welcome to a packed room of Achebe fans, former students, family members, and UN officials and visitors.

I actually had never been inside the United Nations complex, so this was a special treat, and because of construction and, I surmise, security requirements, other attendees and I had to take a long, circuitous route to the Dag Hammarskjöld Library where the event took place. I am often snapping photos, but I kept my camera in my suit pocket as we walked along the UN's East River promenade, which I must say is one of the more picturesque views you will get in Manhattan. After what felt like a journey along an almost Kafkaesque (or Borgesian) trek, we reached the library, and the event began. Among the speakers were Nigerian Ambassador Usman Sarki, Deputy Permanent Representative of the Federal Republic of Nigeria; author and priest Uwem Akpan; Chukwuma Azuonye, a professor of African American and Africana Studies at the University of Massachusetts, Boston, who called for the UN to pass a resolution for an "International Week of Peace" in Achebe's honor; Frederick Douglas Academy VII High School teacher and Afro Heritage publisher Olutusin Mustapha; and Rutgers-New Brunswick scholar, poet and Chair of Women's and Gender Studies Abena P.A. Busia, who read her poem "A Poet Daughter's Farewell: Still Morning Yet".

Also speaking or performing were Darrel himself, who talked about first reading Achebe's novel Things Fall Apart while in middle school and Panama, and being empowered tremendously by it, before he shifted to a discussion of teaching Achebe's work and the trove of insights his students gained from it; singers from the Sri Chinmoy: the Peace Meditation at the United Nations, who sang a poem Sri Chinmoy had written specifically for Achebe; saxophonist David Engelhard, who performed a solo piece entitled "Things Fall Apart"; Bahula Boring, President of the UNSRC Film Society, who introduced a short film clip of a 2008 interview with Achebe at his home on the Bard College campus; and, among the afternoons highlights, Chochi Ejueyitchie, Achebe's granddaughter, who spoke endearingly of the chief lesson he taught her, "humility." As she spoke I thought about this in relation to the fact of Achebe as a pioneering and best-selling of African writers and literary artists, as a brave figure who put his life repeatedly on the line on behalf of the state of Biafra, as a critic who risked ostracization by his colleagues when he openly critiqued the racism of Joseph Conrad in the 1970s, and as a "gentle" man who persevered after the 1990 accident that paralyzed him from the waist down. Humility: this is one of the supreme human and spiritual virtues, and a central aspect of ethical personhood.

In the film clip several of Achebe's quotes really struck me, particularly in reference to sitting in a room in the United Nations, the reality of the debates about immigration in the US and elsewhere, the status of refugee and stateless people, xenophobia, neocolonialism, imperialism, racism, and ethnocentrism, and the various kinds of supremacies that still are too prevalent--and deadly: "Because we are one we are entitled to move from place to place," he said, in relation to his experiences living in Nigeria and the United States, which he followed up with "you are entitled to the world." These are the words not just of a great writer, thinker and visionary, but, as Professor Azuonye said, of a "weaver of myths to live by," the King of Masks, Ijele himself, and his presence was in that room, and, let us all hope, stays with us all always. As always, photos from the event, below. 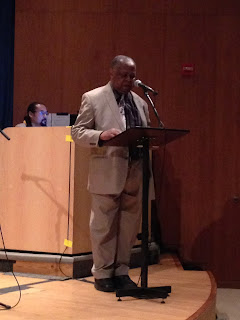