On Saturday evening, as part of the great Myopic Books reading series that Larry Sawyer organizes and runs, I participated in a reading to honor two new books, both translations by wonderful writers: Daniel Borzutzky's new translation of Chilean poet Raúl Zurita's Song for his Disappeared Love (Action Books, 2010), and Kristin Dykstra's translation of Cuban poet Omar Pérez’s Did You Hear About the Fighting Cat (Shearsman Books, 2010). 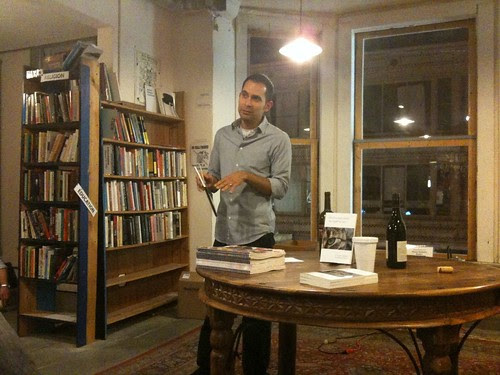 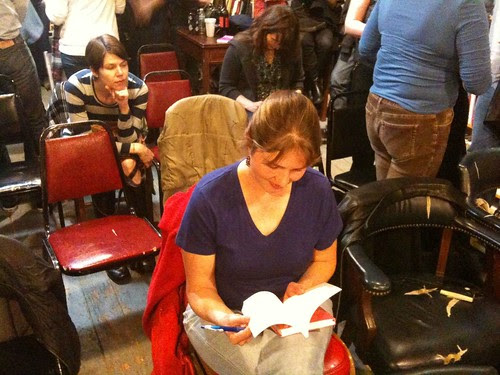 The audience after the reading 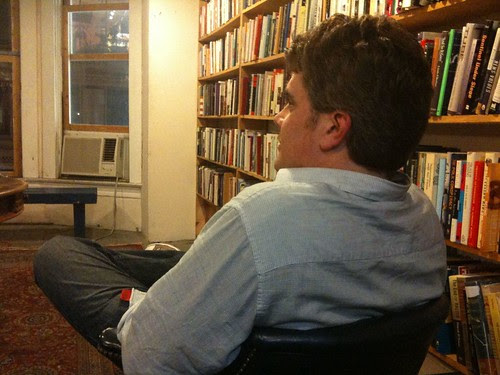 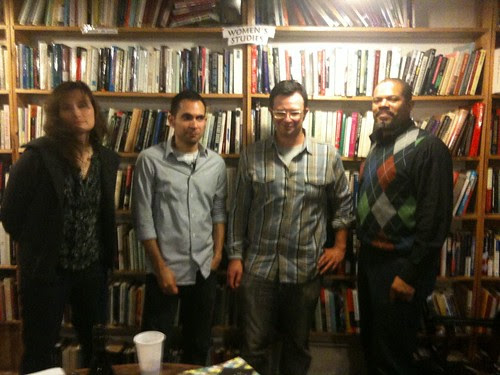 Kristin Dykstra, Paul Martínez Pompa, Daniel Borzutzky, and I, after the reading (taken by Gabriel Gudding) 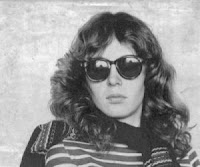 Paul Martínez Pompa and I also read, and because the event was celebrating translation, I read translations of two poets I've been translating over the last few months, Brazilian writers Ana Cristina Cesar (1952-1983) and Paul Leminski (1944-1989), both of whom were contemporaries of Zurita (Pérez was born in 1964), and are highly regarded in contemporary Brazilian and South American letters.  Both also have been linked as part of the loosely affiliated "marginal poets," an affiliation based in part on their novel and somewhat experimental, though differing approaches to poetic style and address.

Cesar was a queer São Paulo-born poet who studied and spent time in London, before later living in Brasília, and her poetry often unfolds like conversation, or dialogues, the intimacy enhanced and mitigated by her wide range of references, allusions and irony.  Her fame has steadily grown since her death, by suicide, at the age of 31. Leminski, whose ancestry included African and Polish roots, often played with rhyme and rhythms, while also incorporating poetic forms such as haikai and haibun, drawings and calligraphy, and other languages, such as English.  I find myself drawn back again and again to the work of both, and was delighted to have an opportunity to read some of these publicly. I am posting one translation by each below.  Enjoy!

The heart has little irony in the late afternoon
Carnal secrets on the surface of the skin
skinny poems, just waiting