Note: A link to information on poet Craig Arnold, who was on a creative fellowship in Japan, and has disappeared.

A few recent events I've attended have included readings by Zimbabwean novelist and filmmaker Tsitsi Dangarembga, who spoke at the university as part of the Program in African Studies' 60th anniversary; authors Thomas Glave and Dorothy Allison, who presented new work at Women & Children First bookstore; and anthropologist and leading scholar of Afro-Atlantic religions J. Lorand Matory, who spoke on his new book project as part of DePaul University's African Diasporic studies series. Photos below.

Tsitsi Dangarembga visited the university as part of the Program in African Studies' yearlong celebration of its 60th anniversary. (I believe it's the oldest in the United States.) I found myself delivering an impromptu introduction for Dangarembga, which was an honor to do as I've been a fan of her work for some time, and have repeatedly taught her first novel Nervous Conditions, which I imagine is probably one of the best known novels outside Africa by a late 20th century African woman writer. Dangarembga, whose name I pronounced correctly phonetically (though the accented syllable was wrong--I think she pronounced it Dahng-GAHRM-gah) read from that book, and its sequels, The Book of Not (Oxford: Ayebia Clark) and the third in the trilogy, Bira (sp.?), which cumulatively explore the life trajectory of her protagonist, Tambudzai, as she grows up in pre- and post-revolutionary Rhodesia, which became Zimbabwe, whose current sad fortunes the world is quite familiar with. The excerpt from the third, not-yet-published book in the trilogy was particularly disturbing; in it, Tambudzai, whom society has molded into an utterly alienated quasi-person, not only witnesses, but cheers on a violent attack against a coquettish young woman who fails to show proper decorum, in behavior and clothing, at a bus station. Dangarembga talked about all three books, her filmmaking career (the university screened two of her films, which I unfortunately wasn't able to catch), and the difficulties, especially economic, of life in Zimbabwe today. In response to one graduate student's query, she discussed writing in English, which she feels most comfortable working in and which has allowed her to reach a wide audience, alongside Ngugi's dictum to write in an African language, which in her case would be Shona. One of the problems for anyone writing in Shona, as opposed to English (the colonizers' language, of course), or some other African languages like Yoruba or Gikuyu, is the lack of any mechanism of standardization for Shona. When I mentioned this to a Zimbabwean student at the university, he agreed, and said it was an issue under debate back home. 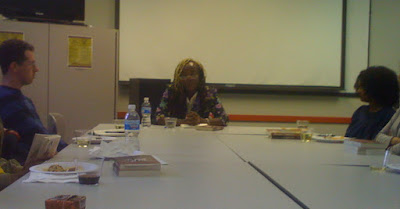 Tsitsi Dangarembga at the university

Writers Thomas Glave and Dorothy Allison read this past weekend at Womens' and Children's Books, in Andersonville. I hadn't seen Thomas since he was last at the university about 4 years ago reading from his collection of essays, Words To Our Now, and hadn't seen Dorothy since one of those early 1990s OutWrites, I think (how I miss those days!), but both were in sharp form. Thomas read excerpts from two stories: first he offered up a sliver of his new collection, The Torturer's Wife's, final story, "Out There," which is set in Jamaica and explores the consciousness of a married man, Aston, who witnessed and then returns to the ruins of the country house where his one close friend and fellow lover of men, Carlton, was burned alive by the local townspeople. The excerpt touched upon Aston's desire for a local fisherman, Solomon, also known as "Brattie," whose presence assumes mythic proportions as Aston reckons with the tragedy and trauma of his late friend's and his lives. Then Thomas shifted to the horrifying ending of the title story, in which the eponymous wife, who has been witnessing vaginas and other body parts, very likely from the young women her husband tortured and murdered, decides to take action into her own nearly disembodied hands. Now don't those descriptions make you want to read the stories? Dorothy Allison read a new story, whose narrative engine was the well-modulated voice of a teenager in Sonoma County (where she lives), who imagines what will happen if he's kidnapped and thus becomes famous. It sounds almost trite to describe it as touching, but the story was, even as it was also often hilarious. Allison knows how to get into character via the technique of voice, while also sketching, from the inside out, an entire (working-class) world. Afterwards I got to hang out a little with Thomas and filmmaker Jason Tompkins, a fellow St. Louisan. 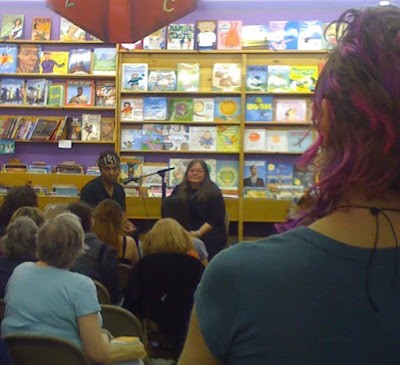 Yesterday I headed down to DePaul University to hear J. Lorand Matory, one of the leading anthropologists studying Afro-Atlantic religions, from Nigerian Òyó Yoruba religion (which led to his acclaimed first book Sex and the Empire That Is No More: Gender and the Politics of Metaphor in Òyó Yoruba Religion [Minnesota, 1994]) to Brazilian Candomblé (about which he's written an important book, Black Atlantic Religion: Tradition, Transnationalism and Matriarchy in the Afro-Brazilian Candomblé [Princeton, 2005], which received the Melville J. Herskovitz Award from the African Studies Association) to transnational Santería. His talk, which was part of DePaul's African Diasporic Studies series, was originally titled "Afro-Atlantic Ontology and the Problems of Transnationalisms," the title of an essay he's writing for a forthcoming edited volume and part of a new project, but he shifted the focus of the talk to a discussion of the signs of citizenship and spirituality, with an emphasis on how sign systems worked in relation to the nation-state in the former, and to transnational spiritual systems in the latter. The resultant title was "Sacred Double-Consciousness: The Signs of Citizenship and of Spirit Possession in the New World," and while I won't try to recap the talk-performance, because Matory really did perform the talk in a way I rarely see scholars do, engaging us in talk, song, dance and, above all, in a show-and-tell session utilizing not only slides but numerous sacred objects that he passed around, I will say that he offered what to me was an expanded way of thinking about "being" itself when he talked about how many Afro-Atlantic religions equate human beings as vessels of multiple spirits and spiritual systems, and discussed the transnational aspects of these spirits. To put it another way, we might think of our bodies and ourselves as "ensembles of being."

As I noted, he displayed actual vessels (soup tureens, cauldrons, etc.), flags, banners, crowns, horns, knives, cane hooks, and so on (some of which are shown below), that are affiliated with particular Afro-Atlantic syncretic deities and divinities, and discussed their relation to several other tenets that are reformulated in Afro-Atlantic religious practices, such as the person as vessel and crossroads, and the notions of royalty and slavery. Part of what also emerged was a rethinking of the terms of nation-state citizenship and its signs, along with a different way of considering the role and understanding of hierarchies, power, slavery, and political economy more broadly. One of the things I was trying to do throughout the talk was to connect his ideas to others I've been mulling about in relation to festival time and space, and questions of time more generally, and I thought I had an aperçu or two, though after I chatted with him, I realized I probably should work these ideas out a bit more, and in dramatized form, as I've been trying to do for some time. Also present at the talk was fellow Chicago poet and healer Abegunde Hamilton Bispo, with whom I hashed out some thoughts during our drive back north. It was only a 2-hour event, but it was definitely a brain workout. 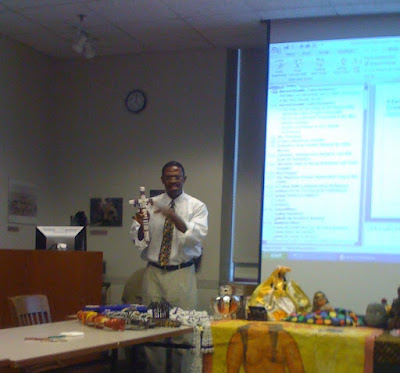 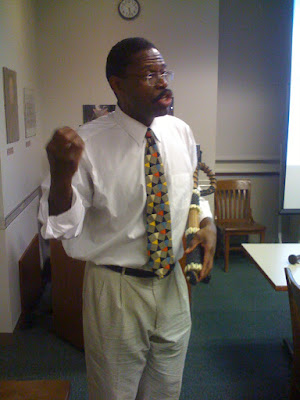 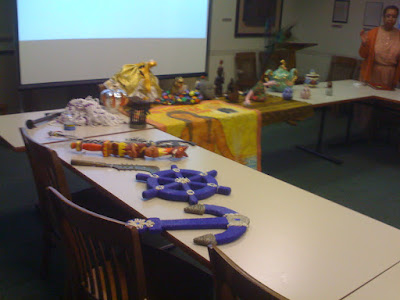 Some of the ritual objects Matory displayed and discussed at his talk
Posted by John K at 3:14 PM