I was going to type that I almost couldn't believe that the new year was underway, but then I realized I'd been waiting for it for a while. Still, there are times when I can't believe that 7 years have passed since 2001 and the turn of the millennium, which was, you'll remember, preceded by a year of frenzy when 2000 rolled around. Often I can recall the 90s, especially the years from 1995 through 2000, vividly, whereas much of the 2000s are a blur. Nevertheless, here's to what I hope is a lively and enjoyable year, personally and for all, even though some of the major economic signs, at least, appear exciting but not in a good way.

Tomorrow promises ones of the biggest public excitements of the new year, the first (quasi-)primary in the 2008 presidential election calendar, the Iowa caucuses. (I'm glad someone on the Newshour with Jim Lehrer walked me and other viewers through these klatsches-over-kaffee-with-votes-thrown-in yesterday.) Truth be told, what a ridiculous means for selecting anything beyond wall colors for a community center. Not only is Iowa unrepresentative on so many counts in terms of the overall makeup of the US, but this system itself is both hyperdemocratic and at the same time, because so many Iowa voters might not be able to participate in it, undemocratic. It, and the whole Iowa-and-New Hampshire first mindset, should be scrapped.

I think the parties should designate 5 regions of the country, say: Northeast, Southeast, Southwest, Pacific Coast and Rocky Mountain, and Midwest, and have a monthly randomly-selected round robin set of primaries, on the same day, in at least one state from each region, with two others selected at random from different regions, for about 7-8 total. 8 would bring the primaries to June, 7 to July. The four largest states, California, Texas, the ever-shrinking New York, and Florida, would be included in the mix. Thus, January's primaries might include: Rhode Island, Georgia, Nevada, Washington, and Missouri, plus Wyoming and Maryland; or Maine, Alabama, Arizona, California, and Wisconsin, plus New Mexico and Michigan. Or something along those lines. These primaries would be one-person one-vote, open, and tallied by paper ballot (in person or via mail). Every state would eventually have an opportunity to gather the early attention, money and swag, the candidates would have to tailor a national platform more quickly, and the execrable national media might have to really do some work for a change. Will it happen? I doubt it, but one can only hope.

I'm not going to make any predictions and the whole "horse race" and money-raising focuses drive me up the wall, but I can say that I have received more emails and calls (thank the Lord they haven't turned to text messaging yet) from the Obama campaign, despite the fact that I've responded harshly both online and in yet another letter, which I sent out today. One of the most annoying email came several months from Michelle Obama, one of which carried the casual and aggressive subject line "Hey." That was it. "Hey" is supposed to make me want to support her husband, whom she recently said has "deign[ed]" to enter the race? Why, thank you. Most of the Obama missives center on campaign strategy, the evils of the other Democratic candidates, and fundraising, which are the last three things I want to hear about. In fact, I would much rather that Obama offer a concrete progressive platform for his proposed administration and address current and long-term political issues, even in a more philosophical, less specific way, while also explaining his frequent invocation of empty post-bipartisanship discourse and use of rightwing frames and rhetoric, which are going to be thrown right back at him or any of the Democrats (along with the anti-Muslim smears that are being steadily churned up). But I gather his campaign advisors don't care about this, since they are already wooing independents and some liberal Republicans, and they just may win Iowa, and New Hampshire. Or not. Oh well, either way, I'm curious to see the outcome tomorrow night. Ultimate, he, Hillary Clinton, John Edwards, Bill Richardson, and the other Democrats, save Dennis Kucinich and Mike Gravel are fairly close in terms of politics and policies, and will have to be ready for the fights of their lives against the Republicans, the mainstream media, and general public ignorance, in the general campaign.

I haven't commented on the ongoing electoral crisis in Kenya, but I had a strong feeling in the days leading up to the presidential election there that incumbent Mwai Kibaki was somehow going to be declared the victor despite articles and polls I'd read suggesting that opposition candidate Raila Odinga had the edge. There have been a number of rather sketchy presidential and governmental elections across the globe over the last few years, from Mexico to Nigeria to Russia to Pakistan to, yes, the USA, all of which underline the fact that in many countries rulers and ruling elites that are intent on holding on to power will readily do so under the pretext of "democracy," or some flimsy version thereof, and dare anyone to challenge them, while also seeking international sanction to legimitize and normalize the chicanery, unless their hands are forced.

I mention the US in particular, because the present administration perhaps feels it cannot simply refrain from commenting on the situation in Kenya, and yet it's really the height of irony for anyone from this gang to be uttering a word about voting irregularities, fraud, or working with the opposition. I guess Florida 2000 and Ohio 2004, along with all the shenanigans leading up to and after both elections should be completely forgotten. (Have most people simply blanked on both?) Maybe the most powerful thing would be for Condoleezza Rice simply to state publicly that the W Gang knows a thing not only about misgoverning and pitting groups against each other, but also about engineering and stealing elections, and Kibaki didn't do such a good job at it, but, like Musharraf, they've (still) got his back. It is, really, a mess. Gukira's inimitable take(s) are here.

Amidst the news and ramblings in today's New York Times was this Sarah Kershaw piece, on how HIV seroconversions are falling overall in NYC, but still rising among young gay men. The rise is comparatively highest for young African-American and Latino men. Sewall Chan links to the piece in today's Times City Room Blog, and notes that Kershaw identified several important co-factors, including "higher rates of drug use among younger men, which can fuel dangerous sex practices, optimism among them that AIDS can be readily treated, and a growing stigma about H.I.V. among gays that keeps some men from revealing that they are infected." Yet another that she glosses and which a younger (in his 30s) friend mentioned to me a few years ago was a certain fatalism and belief that he was sure to seroconvert no matter what he did, that he expected to do so. He was, in a word, fated to become HIV positive. I've posted about this before, so I ask: thoughts? Responses? 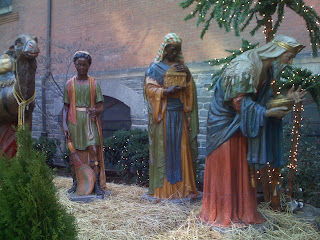