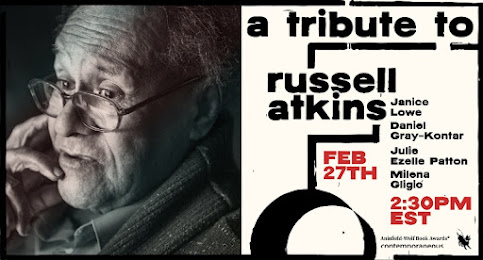 This afternoon Cave Canem hosted a celebration for the great 20th century African American poet Russell Atkins, who had turned 96 just a few days earlier (February 25), and who wonderfully was able to be present, via Zoom, to experience the tribute to and for him. Hosted by Cave Canem's own Dante Micheaux, a gifted poet in his own right, the event featured thrilling readings and performances by Julie Ezelle Patton, Janice Lowe (who read one of Atkins's seemingly unvocalizable poems in marvelous, enthralling fashion), Daniel Gray-Konter, and Milena Gilgić, the first three of whom are, like Atkins, native Clevelanders, and all of whom were able, in various ways, to convey Atkins's profound originality and his abiding influence on their own work.  It would not incorrect to say that Atkins is one of the most important Black experimental writers of his generation and of the last 100 years, and yet his work remains far too little acknowledged. One of the highlights of the event was seeing Atkins onscreen and witnessing him wave and acknowledge all present.

Russell Atkins’ collections of poetry include the chapbooks and small-press books A Podium Presentation (1960), Phenlomena (1961), Objects (1963), Objects 2 (1964), Heretofore (1968), The Nail, to Be Set to Music (1970), Maleficium (1971), and Whichever (1978). He also wrote two verse-plays or “poems in play forms”: The Abortionist and The Corpse, both published in Free Lance. His only full-length collection, Here in The (1976), was published by the Cleveland State Poetry Center. Russell Atkins: On the Life & Work of an American Master (2013), was edited by Kevin Prufer and Michael Dumanis, and included a large selection of Atkins’ previously published work and essays from poets on his continuing influence. World’d Too Much: Selected Poems of Russell Atkins, edited by Kevin Prufer and Robert E. McDonough, was published in 2019.

Some screen captures from the event: 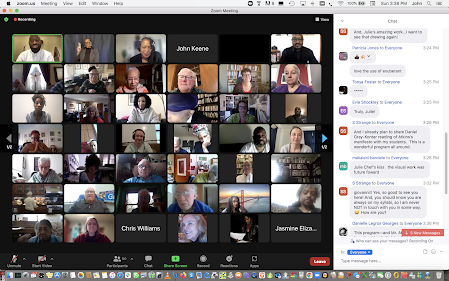