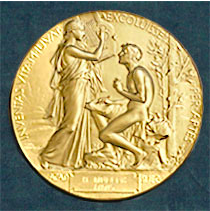 One of this site's perennials used to be my fall Nobel speculation posts. These would usually appear a week or so before the Swedish Academy named that year's Nobel Prize in Literature laureate each October. My predictions, often wrong and far off the mark, would follow a private email exchange with fellow writer Reggie H., who is and remains one of the most avid and discerning readers I know. We would toss out names to each other, and then I'd post a long-ish speculation about whom the Swedish Academy might select from the large pool of excellent writers across the globe.

Several suppositions shaped my choices: The Swedish Academy, though it had elected a woman, author Sara Danius, to lead it as its Permanent Secretary (i.e., Director), has mostly comprised 18 (or nearly that many) white, middle-aged and senior Swedish male academics, critics and writers. One of its prominent members, Horace Engdahl, was on record as denouncing contemporary American literature for its parochialism: "The U.S. is too isolated, too insular. They don't translate enough and don't really participate in the big dialogue of literature." (Yes, by some lights, no by many others.)  Throughout its history, the vast majority of winners have been European men, or wrote in European languages if they lived on other continents (see most of the African winners).

Additionally, most of the Nobel laureates have produced work that was clearly in one genre--poetry, fiction, drama, and to a far lesser degree, historical or critical nonfiction--even if they wrote in a variety of genres; radical formal innovation, outside of some notable examples, has been rare among the winners. I also took into account that certain countries or language groups with significant literary traditions--Brazil, South Korea, India, Algeria, Iran, Nigeria, Cuba, Argentina, etc. have been completely or mostly overlooked. Writers working on other languages--like those of southern India, for example--were like to be ignored completely. Lastly, the charge for this elite body has been, as per Alfred Nobel's will, to give the award for work of "an idealistic nature," and not, as I have always interpreted it, for groundbreaking, lasting, culturally or politically impactful and resonant literature.

Thus, while some of the widely acknowledged great writers of the 20th century from across the globe but writing in European languages--William Faulkner, Ernest Hemingway, Toni Morrison, etc.--have received the award, many more, including James Joyce, Marcel Proust, Virginia Woolf, Wilson Harris, etc., did not, for a variety of reasons some known only the Swedish Academy. Meanwhile, writers who will most certainly fade into the shadows even of their own literatures have been recognized (Mikhail Sholokov, to give one example, Pearl S. Buck and Jaroslav Seifert two others), despite the temporary bump in attention the Nobel gave them. The limitations I note above therefore should lead anyone to approach the Nobel Prize in Literature with considerable skepticism, as Tim Parks argued in the New York Times today. Yet, because of its longstanding global reach, its sustained history and its sizable purse (roughly about $1 million dollars, sometimes more, sometimes less, depending upon the Swedish kroner's exchange rate), it remains the premier honor in the international literary world.

Or it did, perhaps up to the point two years ago when, bizarrely, the Swedish Academy passed over countless superlative living writers, particularly poets, and awarded the honor to Bob Dylan, a songwriter and composer who proceeded to act out by initially not acknowledging his selection, and then left the Academy hanging as to whether he would even show up to accept the prize. (Perhaps embarrassment left him somewhat socially paralyzed.) I am all for eccentricity in choice--Camilo José Cela, anyone?--and vision, but this pick struck me as the worst kind of spasm of Baby Boomer fanboy-ism, a comfort-foodish but also cynical thumb in the face of readers and writers everywhere. It was also, I imagine, an attempt to spark controversy and appear relevant, which is not exactly the purpose of the Nobel Prize in literature, though it succeeded on the first account. I could not bring myself to write about the absurdity of the 2016 debacle. This past year's winner, Kazuo Ishiguro, one of Great Britain's most highly regarded fiction writers, however, seemed like a compensatory, safe choice. Ishiguro is, at the very least, a writer, and one of great accomplishment.

What was unknown to the wider public until last fall, however, was the extent of the maelstrom engulfing the Swedish Academy, a result of snowballing sexual harassment and abuse allegations by 18 women against photographer Jean-Claude Arnault, the 71-year-old husband of one of the Academy's permanent members, poet Kristina Frostensen, and friend to many others. In another literary world-specific instance of the #Metoo movement, he has been accused of using his position to coerce women into sex, including raping them, at his apartments as well as Swedish Academy-owned venues in Stockholm and Paris; allegations of his inappropriate behavior date back to the early 1990s up through to quite recently, when he is reported to have groped Sweden's Crown Princess Victoria. Adding to the controversy, Arnault also is alleged to have leaked the names of Nobel winners at least seven times before they were publicly announced, hinting that Frostenson may have revealed them to him in advance, and providing bookmakers with a potential windfall. In addition, though not a member of the Academy, Arnault co-owned and ran a cultural center, the Forum, in Stockholm, which received Academy funding, so its and his affairs were part of its purview.

In response to the cumulative allegations, some of which date back more than 20 years, several members of the Academy resigned, and former head Danius severed all Academy ties with Arnault and the Forum, then ordered a legal review of Arnault and his cultural center. For her troubles, however, Danius was ousted by fellow members from her post, though she remains an Academy member. The mounting crisis spurred the Nobel Foundation, which oversees and awards all the prizes, to issue a statement postponing the prize for 2018, given the jury's diminished ranks--it now lacks enough members to form a quorum--and the public glare on its internal turmoil. Instead, it will name two winners in 2019. As the acting permanent secretary, scholar Anders Olsson has put it, "Confidence in the academy from the world around us has sunk drastically in the past year...and that is the decisive reason that we are postponing the prize."

Because of its depleted ranks and a rule that members of the jury cannot resign or retire, the King of Sweden, Carl XVI Gustaf, had to step in to change the rules to allow the resigning members to leave and new ones to be added. Only 10 of the current 18 members are active, and most of those remaining carry the taint of the Arnault debacle. As the Der Spiegel article I link to above notes, one option could be for the Nobel Foundation to replace the 232-year-old Swedish Academy, which has awarded the prize since 1901, with another one in the country or based elsewhere. For example, what about a rotating set of "academies," based in a different country every two years? (The Nobel Foundation, however, says no, the award will most likely stay in the Academy's hands, but that it needs to take the necessary steps to reform itself.). Another option might be to limit terms of service and cycle members in and out and, most importantly, bring in artistic and critical authorities from outside Sweden, while also requiring gender parity, age and racial-ethnic diversity, and a clearer statement of what the prize aims to reward. Critic Ron Charles argued in the Washington Post that the Swedish Academy should skip more than one year to get its act together. He even quoted some of Dylan's doggerel to underline how ridiculous the 2016 choice was. Perhaps several years of joint awards, to address the huge gaps in writers and writing the Academy has missed, might also be in order.  Why just two in 2019? What about two for the next ten years, or twenty?

Or, as Tim Parks asks, should there even be a Nobel Prize? Does it matter? Beyond sales surges, however temporary. Even if we account for the limits of any group of judges to assess quality in literary works written in a variety of languages, is there not value in calling attention to works that might merit wider attention based on their assessed excellence, beauty, social and political resonance? Scrapping the Nobel would be dramatic, but does anyone think that some other existing award, like the Man Booker, or the Neustadt International Prize, or a new prize created with funds from one of the world's small but growing ranks of billionaires, would not take its place? Moreover, as I point out in the previous paragraph, what should the Nobel Prize, when it returns, honor? Is Alfred Nobel's specific search for works "of an idealistic nature" still stand? What does "idealistic" even mean in today's world of perpetual war, mass inequality, almost uncontrolled technological advances, and climate change? Should we start honoring those SFF writers who offer glimpses, amidst their dystopias and post-apocalyses, of a better world? It is so unfortunate that Ursula Le Guin and Octavia Butler did not live to enjoy this possible turn of events, unlikely as it may be.

At any rate, then, this fall there will be no Nobel laureate in literature. Maybe the very idea marks an impossibility. On the other hand, as the continued popularity and acclaimed global performances and adaptations of works by figures such as William Shakespeare--who died far too early to be considered for a Nobel, of course--demonstrate, some writers and some works do translate, or can resignify, despite cultural barriers. So, in two years, we will see who the reconstituted Academy, if it can reconstitute and reform itself, selects.
Posted by John K at 8:10 PM