Cindy Sherman (1954-) is one of the most important living American artists. I have to admit, though, that while admire her early Untitled Film Stills (1977-80) series, I used to find the rest of her work that I encountered be a bit repetitive and unengaging. For the life of me I missed why people raved about it and her. I've since seen more of her work, and read a good deal of theory and criticism about her particular approach to (self-)portraiture, its importance in the history of feminist representation and its challenges to female stereotypes, its critiques of the cis-heteropatriarchal male gaze, its play with subjectivity particularly under the rubric of the visual, its narrative force and relationship to prior artists working in a similar vein, and its influence on younger photographers and visual artists, as well as popular culture--think the selfie. More simply, I think I understand much more what she has long been up to, grasping the clear continuities and connections across her oeuvre.

One set of newer images she has been producing really do intrigue me, however. These are her Instagram portraits, a series of curated wgrotesques produced using mobile phone technology that manage to send up the selfie and underscore the insistently performative nature of this genre, especially on Instagram. Sherman has maintained that her staged self-portraits are not her, that they are characters created to interrogate the ways society and culture shape representations. In fact, she has stated that she "hates selfies," and yet, she is using the platform chiefly dedicated to them to turn them on their heads. Her portraits range from the absurd to the wonky to the experimental. They also include "plandids," or planned candid selfies, which she created specifically for W Magazine.

As the magazine put it last year,

Sherman’s project for W apes the social media phenomenon known as the plandid—the planned candid photograph, which is “like a newer, hotter version of the selfie on Instagram,” as one social media expert recently put it. They are carefully composed images of studious nonchalance; they capture subjects who are determinedly carefree. Presented here is a mise en abyme of looking: a woman—or should I say women?—posing for herself on her phone as she poses for another photo that she is pretending not to pose for. Perhaps we are seeing the same images that she is viewing on her screen as she tries out different visages on the fly, shuttling through an uncountable number of aesthetic options with taps and glides of her finger. These works have a particular charge at a time when we snap ourselves with the understanding that our image will ricochet onto any number of screens, devices, and platforms. We are all striving to get it right.

Sherman is characteristically humble, almost flip, about her new digital concretions. “All these Instagram images are, for me, just playing around,” she says. “I don’t think it at all competes with my serious work. They’re just fun, like a little distraction.” But while she says that these “silly sketches” have not yet influenced her art directly, she does seem to be enjoying the ease with which these programs function. “I’m not such a perfectionist with using the apps. If you can erase the background and add another background, I don’t really care if the edges are all clean, and if it looks kind of funky, or if things overlap in a not-so-perfect way. It’s kind of freeing me up a little bit and maybe making me more open to experimentation.”

What does this any of this have to do with poetry or the series of poems I'm posting here? As it turns out, poet Elizabeth Knapp has written a poem--there may be more--in which the speaker produces a self-portrait "as Cindy Sherman's Instagram Account." Except that this sonnet-length, stanza-long verse is not really a self-portrait or a selfie,  but like Sherman's photos, something aslant, the focus not on the artist or person herself, but on the platform, the medium itself. The poem's language sounds more graduate seminar theoretical than lyrical, the argument a series of questions, its focus as much on what the Instagram account is depicting and how it's doing so as much as whom it is sharing with world.  Who and what are those "million followers" consuming as they go from image to image?

It is yet another approach to ekphrasis, one engaging with one of the most dominant social media platforms of our time, and with one of the major visual artists of today. From what I can tell, Knapp, who is the author of an award-winning collection entitled The Spite House (C&R Press, 2011) and a professor at Hood College, has been writing a series of "self-portrait" poems examining various states of being, experiences by others, and so on, taking the very idea of the "self-portrait" into new realms. I hope she will conside new poems focusing on an array of celebrities, particularly ones who are innovating with the (plat)form and others who are buried so deep in their narcissism and self-regard that they may be missing the play they're engaging in.


Here are four images from Cindy Sherman's Instagram account, at @cindysherman. The fist looks like a drawn caricature of Julianne Moore, though it is in fact only a digitally enhanced (and warped) photograph of a bewigged and made up Sherman: 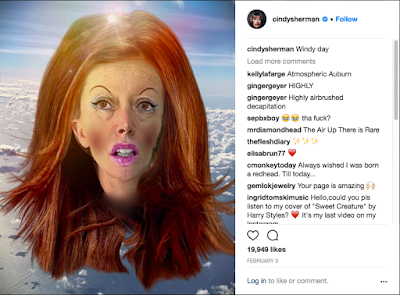 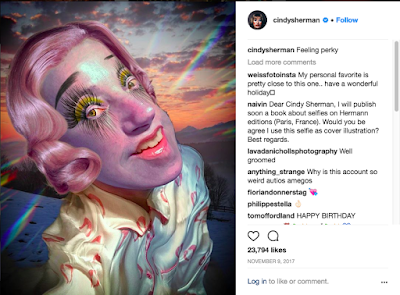 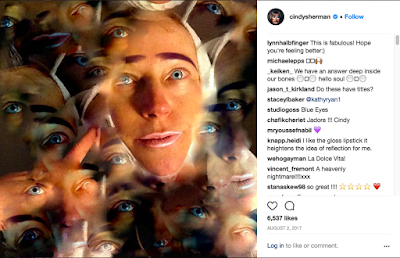